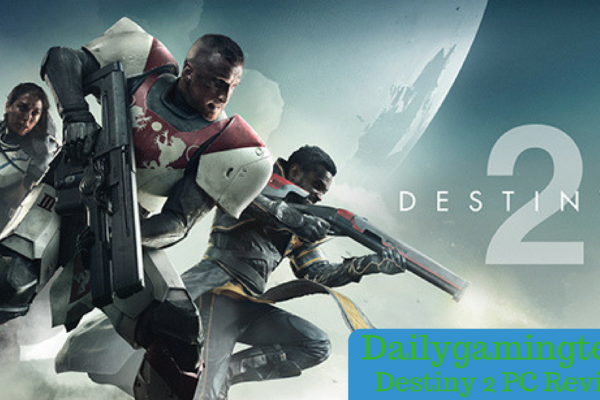 After spending more hours than I wish to admit with the console version of Destiny 2 we finally got our hands on the PC version, is the PC version an improvement? Keep reading to find out as we take a look.

PC Power difference vs old Xbox One hardware is noticeable

One thing i and many of you will notice straight away is how smooth everything is, even between the menu’s there is a huge difference. This wasn’t going to ever be a huge surprise coming from the Xbox One version which is by no means bad, the PC however with it’s extra power really shows the Xbox One’s age! It will be interesting to see how things play out on the One X with 4k but the uncapped frame rate is a huge game changer for the PC!

Jumping straight to the graphics and the first thing to say is this game is definitely a looker! 4K visuals are beautiful and if you have the hardware, the uncapped frame-rate is a different experience to the consoles! Everything feels far more polished, clean and clear and has easily justified the wait for the jump to PC.

I was using a GTX 980 Ti overclocked and it was achieving around 70FPS on the highest settings in 1440p, taking it down slightly and setting it to high my good old 980 was getting around 125-135FPS which made the experience quick and smooth. I used 1440p as my 4k monitor will only achieve 60FPS max where as my 1440p one goes all the way up to 165FPS and there isn’t many GPU’s out there maxing out 4k gaming anyway. Finding the right balance for the setup you have will take a little bit of tweaking but in all honesty the game runs and looks fantastic as even playing on my laptop at 1080p it looked fantastic on full settings with 65FPS!

One benefit for the PC version over it’s console version is the ability to use a mouse and keyboard! Some may prefer the controller but I personally feel aiming with a mouse fits Destiny perfectly, the control is smooth,accurate and responsive and the keyboard can be fully mapped to you own preference.If you do however prefer the controller this can also be used but for me personally I found the mouse and keyboard the much preferred option.

Console users will soon have the option to use mouse and keyboard if it is something they wish to take advantage of, check out the Hori Tac Pro One

Is there any noticeable differences to the console version?

Game play throughout feels improved over the consoles due to the things mentioned earlier, with such a high frame-rate everything is much smoother and faster making shooting a very satisfying experience!

The mouse and keyboard support won’t be for everyone but worked best for me, navigating the menu’s and character inventory is much easier and faster than using a controller.

There were a couple of differences in using a mouse and keyboard that I noticed over the console version, one small one was there is no longer a lock tab on items keeping you from accidentally breaking down items you don’t mean too, the other is a larger difference and that is there is no longer any aiming assist! When playing on console aim assist is very noticeable and makes aiming feel very easy as it has a locked on effect where as on the PC with a keyboard and mouse this has been removed meaning shooting is totally down to skill now, making them head-shots all the more satisfying.

The loot is the addictive part of the game and will be the one thing that keeps you coming back once the main story is complete. After completing the main story the fun really begins and it’s the start of a huge grind to acquire some of the games best loot for weapons and armour.

Items are sorted into different categories such as the common stuff up to the exotics, these exotics are the ones everyone will be after but always remember you can only equip one exotic weapon and one piece of exotic armour at one time so some legendary gear will be as important as you up your characters power level!

Finding the loot can be done in multiple ways, killing enemies sometimes drops emblems, legendary and exotics need to then be taken to Master Rahool and will turn them into gear, other ways are to complete missions and objectives as well as the strikes on offer later in the game and when your power level is high enough the better loot can be found by doing the Raids.

One thing Destiny 2 always did for me was keep me playing, there is always something to do and public events were always a fun way to pick up loot even though most of the time it was the same old stuff with a slightly higher or sometimes lower power level. If you are new to Destiny then at first things can be overwhelming with all the different ways to actually power your character up, breaking down weapons for shards and then fusing them with other weapons is all an art to get your character up to the high 280 power level to then tackle the raid everyone talks about… Leviathan! Make sure you set aside a good amount of time with a good team to tackle this!

Without giving any spoilers there is an easier way to obtain exotics and that is to watch out for a very shady looking creature called XUR, he appears randomly on a Friday of every week for around a day and sells exotic items for the price of legendary shards, these shards can only be obtained by breaking down legendary items so saving the shards during the week is a must if you wish to shop from him.

One other way to get legendary emblems is from characters throughout the planets and some of the vendors. The gunsmith for instance will trade multiple weapon parts which you break down weapons to receive reputation with him and when the bar is filled he will give you a legendary emblem holding items that are around your level of legendary quality.

Gunsmiths also sell gear mods but a certain light level will need to be obtained before this is even of any concern to you. These gear mods will modify equipment to your desired specification.

Destiny 2 is the same as the original in that it is a huge grind, while some won’t care and get totally addicted to trying to acquire some of the exotic and legendary loot on offer others may find it a little too repetitive. I personally found playing with friends was an absolute blast and time flew without ever getting repetitive making everyone work as a team to complete objectives.

Getting the main story completed is a must to progress.

The best thing to do when starting Destiny is complete the main story as soon as you can because leveling up your character opens up so many different play options such as the Raids and Strikes which both hold some of the games best loot!

The story itself while not giving any spoilers isn’t bad and a great experience playing with friends but it is fairly easy and a short experience.

Another reason to complete the story is to get the character level up, while Destiny 2 is not a RPG heavy system and is very basic in it’s setup for character upgrades, the characters come in three different classes: Titan, Warlock and Hunter. Each one has it’s own strength’s and abilities, the Warlock for example has a super ability called Daybreak, this allows your Warlock the use of a highly powerful flaming blade for a short period of time to clear out massive amounts of enemies dealing great amounts of damage.

Sound is  effects help immersion with keyboard and mouse use

The main drawback for the keyboard and mouse is there is no force feedback, sound therefor needs to be spot on to get the feeling across to the player without the use of force feedback. Destiny 2 does a great job putting the action on the screen across in the sound, everything is punchy and enemy hits have a decent impact all giving a good sense of immersion.

Backing music throughout the game portrays well with the action on the screen giving the players a good idea of what is to come, some great adrenaline pumping music really adds to the fight when things start to really kick off with hordes attacking.

If you have already played console should you now start on the PC again?

This is a difficult one and will depend if the original Destiny grind is for you! If you have not however tried Destiny 2 yet and you are not sure it’s a no brainier buy it now you will not be disappointed! The content on offer and the sheer hard work gone into this game is clear to see and things will only get better as time goes on and more content is released as was the same with the original Destiny!

I personally ploughed hours into the console version and leaving the character behind to start fresh is a little frustrating but for the experience the PC offers it really is worth it. The whole difference is hard to put into words it really does feel like a different game and would recommend the switch to anyone no matter how high your poor console characters power level is.

The PC version of Destiny 2 is far from being just a console port, it is a beautifully polished experience and just about everything is improved as well as the added bonus of being able to aim accurately with a mouse and keyboard. The usual Destiny grind is still there but the game as a whole does a great job of keeping players entertained with the addictive power level obsession and with future content around the corner I feel safe to say Destiny 2 will be a classic and around for a very long time!