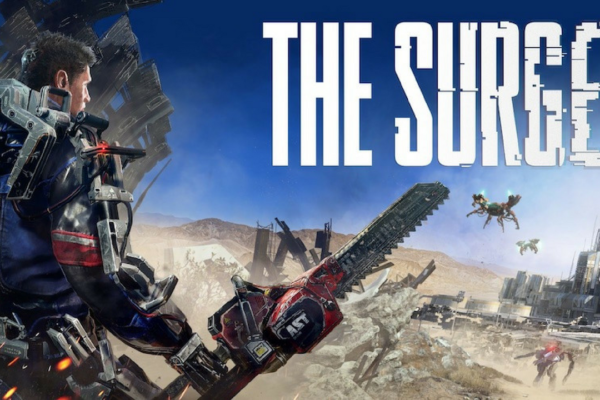 Tested on both Xbox One and Xbox One X.

The Surge is a game developed by Deck 13 the team behind the series Lords of the Fallen. If you ever played Lords of the fallen you will remember it’s similarities to a certain series called Dark Souls, known for it’s unreal difficulty Lords of the fallen was the same mold and you are guaranteed to die at some point, the Surge is no different! Be ready for constant deaths and some infuriating battles!

I personally really liked Lords Of The Fallen, I was fairly late getting my hands on it and when I did I wasn’t disappointed and the same thing has happened for me with the Surge!

You start the game as Warren, a worker for Creo who is bound to a wheelchair. You awaken to find that you are no longer wheelchair bound but now in an exo suit with the ability to walk again but sadly everything around you has gone a little wrong, your workmates are no longer normal but now robotic mech killing machines!

The game doesn’t hold your hand at all and from the off soon you will find yourself dead and that’s just part of the game! Starting out Warren has a very basic Exo suit with no real weapons, armour or implants to protect himself. This however is where things need to change and upgrading Warren’s abilities, weapons and armour is essential!

Enemies are the key to improvement and will take real skill and timing to bring them down and come away with that new schematic that will allow you to develop the item the enemy was using to try and kill you. The targeting is done by clicking the right analogue stick to select the enemy then you can move the stick to attack a certain body part of your foe. The body part you select will need to be attacked until its weak enough to perform a special attack to cut it clean off, once off the item will be ready waiting on the floor to be picked up, this isn’t guaranteed that it will but it will sometimes.

Taking down enemies also gains Warren tech scraps which allow Warren to increase his core power, this is something that needs improving fast as each item you equip will need to use some of the cores power and without a high enough level some items can’t be used! The tech scraps and schematics can all be used in the safehouse, the medbay will replenish your health bar and can be used to upgrade the core power and the machine next to it is the gear assembly and that’s used to assemble some of the new items that you develop through the found schematics.

The crafting and leveling system in these sort of games can be fairly complex but The Surge does a great job of keeping things fairly simple and it’s very intuitive, after an hour or so everything makes sense and easy to understand.

Now back to the dying and it’s something you will be doing A LOT! The real downside to dying is dropping all your hard fought tech scraps but they are not lost for good as long as you don’t die again, they will be on the floor waiting for you to find and collect them where you died, there is a small time limit to get there so you can’t take too long to get them but at least you can explore with a bit of safety knowing you can get them back. The only problem is if you die miles from the safe zone you will be in for a fairly big fight to get to them as every time you enter the safe zone or die all the enemies on the level respawn and will need fighting again! Enemies will all be in the same places so you shouldn’t get too many jumpy moments like you do when you first approach a level but you will need to fight or run through to get the lost tech scraps.

The weapons on offer are melee types and offer a fair bit of variation in type, the bigger slower weapons provide huge damage whereas the smaller agile ones cause smaller amounts of damage, I personally preferred the heavier high damaging weapons but that’s just my preference. As you can imagine though a heavy tech exo suit does tend to slow Warren a fair bit, dodging in this game is more than essential it’s the only thing that will keep Warren alive! Using certain armour types provides a little more agility but timing the dodges is far more important.

The way the levels are set out leaves you having to gamble a little as you will have to carry the tech scraps through to the end of the level, going back to bank them will result in the level respawning the enemies and leaving you back where you started so unless you try to run straight through it will be about getting as far as you can with minimal damage! The implants scattered around are also essential as health doesn’t regenerate, some implants will fully heal Warren or heal for a set time whereas others will add abilities like using a drone to attack enemies. Implants however do use some of the core power so again it’s essential to keep upgrading Warren’s core to be able to use some of the more powerful implants.

Visually I was really impressed with everything especially on the Xbox One X, everything was noticeably sharper and a much smoother framerate over the Xbox One. There was impressive detail in the characters throughout with a bit of gore on offer to blend in with the horror theme. As i mentioned it looked and played great on the One X, this isn’t to say it was bad on the original Xbox One but there is a difference, textures were just much smoother and the framerate was noticeably better but the game did play really well on either system.

The story was well told with good voice acting but you will spend most of your time trying to acquire stronger armour and weapons while collecting as many tech scraps as possible. The boss fights are very tricky and will require thinking first as there is usually as set way to bring them down.

I come across a few friendly characters throughout the story, none were majorly interesting but did offer good voice acting with multiple choice questions to ask them, Warren also speaks which is good so there is no real reading!

The controls are pretty good, there are a few little annoying things like not being able to move the camera when locking to an enemy as it will just select a different body part to attack but other than that I found them pretty easy to master and once the dodging and blocking is mastered the whole experience is far less frustrating! Blocking is an option but I personally found I was taking more damage than when I was dodging attacks as it got me away from the fight with time to plan my attack! The only benefit with a well timed block is the counter attack that Warren can then perform but getting the block right is essential as some stronger enemies will be able to break throw the block.

The Surge was a pleasant surprise to me as was Lords Of The Fallen back when I played that. The visuals look great and performance was smooth and fast on the One X, sound and voice acting was really good and I found the difficulty although hard not too hard that it made the game unplayable. The crafting and upgrade system is very intuitive and makes the crafting experience very enjoyable and addictive trying to find the parts you need to make the items you want! If you liked Lords Of The Fallen or any of the Dark Souls games then The Surge is more than worth a try especially for the prices that it can now be found at!