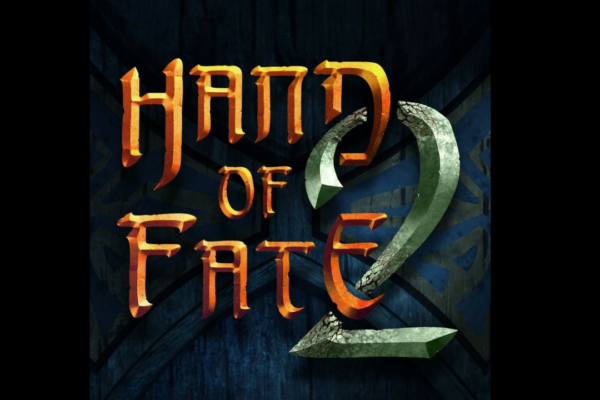 Available now on PS4, PC and Xbox One.

Hand of fate is a deck-building card adventure game, having never played the original everything in the latest instalment was new to me. The game starts by giving you a small intro from the dealer then you will be tasked with selecting the characters gender that you will be using. Once the gender selection is out of the way the game will begin.

The game has multiple missions and before each mission you will be able to select equipment cards and certain encounter cards, there is an option to have these selected for you but the game does state it won’t always be the best choice, the dealer will then mix these cards in with his selected cards and then they will be laid out on the table in front of you both face down. You will then make your way around the structure of the cards one by one, each card will be something different, some will help progression to the final goal where as some won’t and will have a negative effect on progress.

The character will have three things to keep an eye on during the missions and this is food so they don’t starve to death, health and also money. running out of any of these things will result in a mission fail and you will have to start again. While some of the cards will offer things like shops to aid your quest through the mission some will place you in combat and you will be thrust into a small area to fight enemies.

The third person combat system is similar to that of Batman Arkham Asylum or Middle Earth Shadow of War, just not as responsive or as visually pleasing. This is not to say it’s bad by any means, the controls are very basic and it won’t take long for new players to get the hang of it. The camera has been much improved

The enemies in combat vary and some fights will have a stronger boss to battle, these fights will require a bit more skill as dodging and blocking will become crucial to survive! Bosses like the one shown below will require you to use the bash attack to break down it’s armour before eventually using a finishing move to finally defeat it.

On the way to these harder boss battles you will acquire cards to add to your deck that will contain soldiers who will fight beside you. I found they provide a bit of a diversion so you have a bit of space to take down your enemies to finally take out the main boss.

Along the way you will gain companions, the companions gained can help in combat such as The Trickster who will be one of the first companions you can gain, in battle he will be able to shield your character from one attack stopping all damage from the enemy!

As you progress cards resources can be collected such as food but also weapons and armour can be found, different weapons will vary in their power as well as armour will provide more protection. Keeping supplies filled throughout the mission can prove the difference between life and death, if you run out the mission will be a complete failure and you will need to completely start the mission again which can be pretty annoying as I found this made the game based more on the luck of the cards drawn rather than the skill of the player.

Graphically the games visuals are nice to look at while at the table with the dealer with some nice crisp visuals and a fair amount of detail, the combat section on the other hand does look a little dated and you will constantly notice textures going through each other. The combat mode does it’s job well enough on the performance side of things with no noticeable slowdown and great responsiveness. The options menu did have an option to prefer framerate over resolution so that may help if you are having any issues with the framerate.

The dealer is by far one of the games greatest features with great voice acting and well thought out lines, players won’t get bored of him anytime soon, well I didn’t anyway! Although the dealer is voice acted though, most of the story is told through subtitles so there is a fair amount of reading to be done.

Hand Of Fate 2 is different to anything I have ever played before and in a way it’s a nice change, the gameplay and setup is highly addictive and only slightly annoying in the fact progress can be based more on luck than skill. The combat feels fast and responsive with basic and easy controls to master. The dealer is by far one of the games strongest features, he’s a well written character with plenty of great lines and voice acting! Hand of Fate 2 has plenty to offer and I would recommend to anyone wanting to try something a little different!