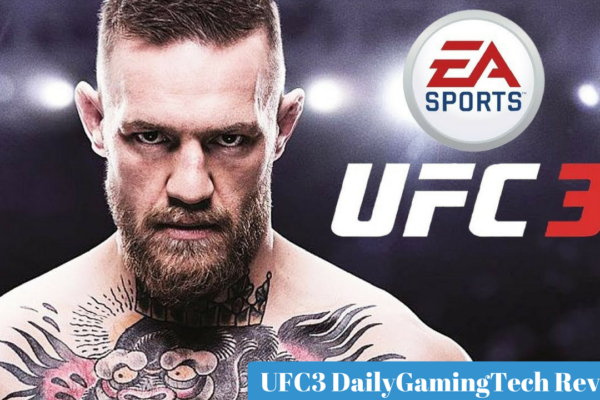 Available now on Xbox One and PS4.

UFC fans will be happy to finally get the latest installment in the UFC series but is it better than it’s predecessor? Keep reading to find out!

Being a fan of UFC the games have always appealed to me, UFC 3 boasts to take everything up a notch and bring it even closer to the real thing! Video games have always struggled to capture the the atmosphere and the gruesome images on offer in real life but UFC 3 is finally getting close and this is by far the best in the series yet!

The game has an incredible amount of detail and character roster that will keep all fans happy as all your heroes should be available for you to take control of, including the incredible Bruce Lee! Conor Mcgregor is the games main star and he features pretty much everything you would expect to bring him as close to life as possible, his extremely huge ego is portrayed perfectly with his famous ring walk as well as his general attitude. These features for Conor as well as all the other fighters really make the game feel authentic and UFC fans will love the detail that’s been put into everything!

As well as the detail in the real life characters there is the character creation mode which allows players to make their own character, The options are pretty extensive and you can model the character well to yourself or even scan your face straight into the game which saves some time.

UFC 3 still uses the Ignite engine from EA and not the latest Frostbite one that Fifa 18 currently uses. While this may sound like a bad thing the game looks absolutely brilliant at times, the lighting and detail in the arena’s is really impressive as well as the fighters who are all extremely well detailed. The damage model on the characters is also as gruesome as it needs to be, blood and sweat will be splattered all over the ring and your opponent when some of the big hard hits are landed which all looks incredible! As the fight goes on you will really see the characters struggling, eyes will swell, legs will buckle and cuts and blood will be everywhere (unless your good enough to not get hit!)

The fight night atmosphere in the arena’s such as the octagon is also really authentic, seeing announcer Bruce Buffer shouting out the fighters  with the incredible detail that even he has is a really good authentic touch making the whole experience look very real!

Ok so onto the actual fighting and it’s a bit of a mixed bag! The striking on the game is much improved and feels great landing a hard punch on your opponent while dodging one that’s being thrown at you.  The striking now feels far more skillful than what I remember in previous games, it’s now very tactical because throwing endless punches and kicks will decrease the stamina bar, more so if you don’t actually make contact which could then result in one punch from your opponent leaving your character on the canvas! Button bashing is definitely something that won’t work here and trying it will result in a lose faster than you know it! Your character has three different health bars, head, body and legs and keeping an eye on these is crucial to surviving your opponents onslaught!

While the striking feels improved something that has left me feeling beyond frustrated is the grappling and submissions! The grappling feels a bit of a mess in my opinion and everytime my opponent took me to the floor I was left frustrated by the end of it! Your character will basically need to keep shifting their weight around by using the analogue stick and pushing it towards one of the four different options, each option will put the character into a different position. Punching and kicking can also be done here but it’s mainly about getting the painful submission from your opponent or defending yourself until you can escape. The whole process just feels a little under finished and really slows the gameplay down to a boring slog, hopefully next year this is something that will be worked on.

UFC 3 features a few modes for players to experience, the career mode is i’m happy to say improved! Becoming the G.O.A.T is the main aim here and starting from the bottom you will need to fight your way to the very top. To start with you will need to make your fighter and then choose the style and weight class that you want to use, there are a few options here from specialist strikers to specialist grapplers so choosing one to suit your own style is very important.

With the fighter now chosen and style selected the hard road ahead begins, choosing the next fight and then training for it will be key, training is now a menu with sub menus that you will choose what to improve, for example time on the treadmill will increase power and strike speed but this comes at a cost of your fighters weakly points so you will need to choose carefully what things your fighter needs to actually improve on before the fight without completely burning out your fighter leaving them exhausted and slow in the fight.

Difficulty can be changed with four different setting to choose from, the hardest won’t allow you to restart the fight if you lose whereas the others will, easy can still be a challenge for new players but experienced UFC fans will want probably be happy to fight on normal.

Fighting is not the only thing needed to become G.O.A.T (greatest of all time) players will need to promote the fight and this also uses some of the weekly points, the whole process is a little boring and will just post a generic tweet on twitter from you to try and increase hype for the fight. Certain targets will need to be hit as well to reach the very top, checklists of ways to win (submissions, knockouts ect) as well as other things like consecutive title defenses will all be needed to complete everything.

The career mode for me was the best mode on offer as well as the practice mode which is essential to master moves and win the fights. The ultimate team mode is something I was steering well clear of purely because it felt very much pay to win with the micro transactions, this really isn’t needed and I would have hoped that EA would have learnt from the whole Star Wars Battlefront 2 issue they had but sadly they haven’t. While the Ultimate team mode can be fun there is plenty of other modes available to keep players busy and away from spending even more money on a game they have already brought!

Fightnet allows you to compare with friends and there as also modes to take on other online players so combined with the career mode there really is plenty to keep players busy!

UFC 3 is a bit of a mixed bag, while it’s by far the best UFC game available it’s held back by some incredibly frustrating flaws! The striking feels fast and punchy but the slow and broken feeling of the grappling brings the flow of the fight to a grinding halt! Visually the game looks great and the character detail is really impressive! Plenty of online and offline modes and an up to date roster all make UFC 3 a game any UFC fan should definitely at least try!