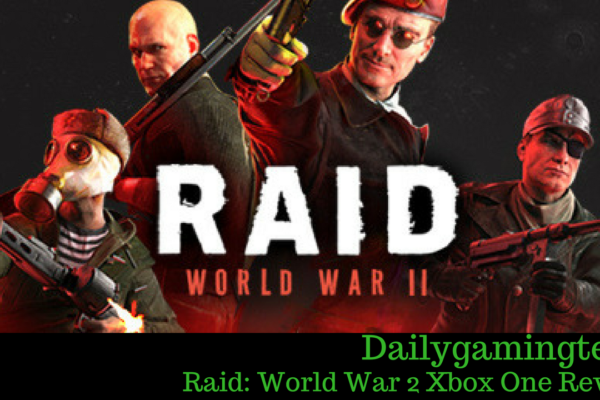 After waiting a while for Raid World War 2 it is finally here but straight off I have to be honest it wasn’t worth the wait.

Raid is a one-to-four playing shooting game set out in World War 2. Developed by Lion Game Lion, the people behind some of the content for the highly popular shooter Payday 2 I, like many others, really had high hopes for this game when I saw it was to be released.

Things start with a cut scene that includes the actor and comedian John Cleese, this straight away makes you realise that the game won’t be some serious sad war story and more of something not taking itself too serious especially when you see how they portray Hitler!

The trouble with John Cleese in there is I really felt he couldn’t actually be bothered, this may have been the way he was meant to be but it just looked like he didn’t even want to be in the game at all!

Once you finally start the game you are taken to a base camp where you will be left to open boxes and unpack equipment to get ready to start the game, in this room there is multiple things once it is all unpacked from character selection to joining other online games. On the bench to your right when you enter the room is a place to plan your next mission.

Pressing the RB button will then open up the list of missions for you to choose from, these are split into two categories including raid and operations. A few options are available for each mission including: difficulty, permission, allow drop in, play with team AI and the option to auto-kick cheaters.

From here everything seems ok but the moment you drop into the mission it’s clear to see why I feel the way I do about Raid. The voice acting isn’t the worst in the world but the constant cheesy lines do wear thin very quickly, on top of that there is the awful backing music that just seems to be stuck on a continuous irritating loop.

The graphics are far from perfect but much more acceptable than the absolutely awful AI which is possibly the main killer for Raid! Enemies will constantly stand in a line ready to be shot down or just run around like headless chickens until they completely crowd you, but there is no need to worry even then as they will most likely miss an easy shot while standing directly in front of you. The accuracy is about as good as if they were blindfolded but if they do actually manage to hit you it still won’t matter as shots from anywhere seem to do absolutely no damage?! I actually had more damage done to me by falling a few foot than what I have with the German firing squad in front of me!

If you watched the video above it also shows some serious talent of being able to walk up a ladder at speed without using your hands! It is just all these things that show a clear lack of attention to detail and make the whole experience feel very unfinished. I reviewed a game called Verdun on the Xbox One a while back and I was getting a real sense of deja vu, the unfinished feel and terrible AI completely ruin the whole experience and Raid is absolutely no different!

Enemy solders will constantly walk through walls or appear straight through a closed door, as well as a few open doors with invisible walls which is one of my main hates! If you don’t want the player to enter a room put a closed door there not an invisible wall!!! Constant walking through team mates and glitchy enemies it just feels unfinished. I could go on forever with all the little things and some of the larger problems too but I think there is enough there to make it clear this isn’t worth the asking price….

Now with all the other problems surely Raid does the shooting right?? Wrong! Aiming feels loose and inaccurate as well as having no idea if you have done major damage to your enemy as they barely flinch after taking a shot. I also found aiming to be really hard as aiming down the sight was really difficult to even see enemy soldiers as they shoot around the map like road runner! Don’t rely on your squad either because on single player they are basically just there for cover fire! They don’t help with the task at hand at all and on a few occasions didn’t even bother to get me up when I was on the floor bleeding out.

Multiplayer is the only way to play Raid as the AI team mates like I said above are terrible but the problem with multiplayer is that it’s actually dead! Getting a game with others was a task in itself but I can clearly see why noone is playing.

Health and ammo are found by killing enemies and also found in creates and containers, some containers require lock picking and to do this:

I personally feel so let down by Raid it looked really promising when it was announced but it is going to need some serious work to pull it back up there with the better shooters out there! To be perfectly honest I think Raid will vanish fairly fast and be totally forgotten which is a total shame as this really could have been a great multiplayer game!

Raid was showing so much promise but sadly it hasn’t even slightly delivered and honestly feels unfinished and rushed. Some of the worst AI I have ever seen and loads of glitches make it a very frustrating experience and that is without the over the top voice acting and annoying soundtrack! This could have been a great multiplayer fps but sadly unless they seriously improve it stay well clear!