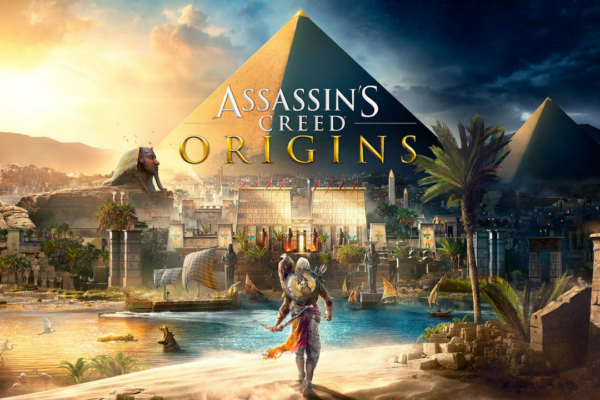 With the highly anticipated launch of Assassins Creed Origins just over a week away Ubisoft have released just under two whole hours of pre-launch game footage!

Assassins Creed Origins will launch October 27th on PC, Xbox One and PS4.

From the trailers and game footage we have seen so far this year, Assassins Creed Origins looks really promising! Origins looks likely to push the series forward and with it bringing so many new features it is easy to see why!

Visually the game looks stunning, we can only imagine what this game will look like a couple of weeks after launch on a Xbox One X!

The Assassins Creed series always delivers on the trailers before launch and Origins is absolutely no different, the cinematic trailer below really shows off how beautiful a video game can actually look! Just look at the amount of detail on just about every object and then there is the stunning lighting effects as well as the perfect backing music. Ubisoft certainly know how to get it right with the trailers!

The main star in the game will be the Egyptian assassin Bayek. Bayek the Medjay is responsible for protecting the Egyptian people, while unearthing some of this huge open worlds secrets. The new assassin Bayek will have to engage in multiple quests and different stories, crossing paths with many strong and memorable characters.

We take a look into some of the features we have for this soon to be released Ubisoft game.

As seen in some of the videos and trailers there will be plenty of variation in travel, Bayek will be able to saddle up on ether horse or camel to make travel around this massive open world space a fair bit faster. If jumping in the saddle isn’t really for you there are boats and chariots also available giving the player a fair few options to explore this huge open world.

Not really travel related but Bayek’s pal needs a mention, Senu is an eagle that can be used to scout the area from above. Senu can tag enemies and scout far into the distance to plan your next route.

One thing that does look impressive and been mentioned a fair bit is she sheer size of the open world that Bayek can explore! It looks huge and with the added ability to swim underwater there seems to be no boundaries.

The game features plenty of side quests which also has no limit of how many quests you have running at one time. Quests will allow you to meet multiple characters, experience different stories and get to know details about Bayek himself.

Origins does feature fast travelling which will be a relief for some with the size of the open world, many different ways including once you visit certain villages as well as the viewpoints scattered around can unlock a fast travel to that viewpoint or back to that village that you have visited.

Throughout the world looks very filled even with the massive size it is! Towns are filled with guards and NPCs as well as the waters being filled with some scary beasts like crocodiles and hippos. There is basically not an area where Origins looks blank and there will always be something to do or look at!

The great thing about this world is the fact anything can happen and it is living, shown in the video at the top is the fact a hippo attacked a region, took out guards and then reinforcements are called. This makes the game unpredictable and exciting as well as giving everyone a different quest in some way or form.

Day and night cycle will change the world completely, guards change shifts and some sleep giving you so many options on how you approach the task at hand. Dead bodies can also be moved and hidden which is great to keep yourself hidden if you are playing stealth.

Now onto something very interesting and that’s the RPG element, from the trailers we have seen there is a big RPG element in Origins. There is the ability to craft and upgrade weapons and armour as well as the ability tree which unlocks abilities for Bayek to use.

Upgrading weapons will level them up enhancing the damage that they do and eventually enhancing them enough to get a one hit kill on the enemy with the RPG system. Crafting is also there to enhance health stats making Bayek harder to kill.

The skill tree is set into three different categories:

Loot is dropped by enemies throughout and can also be acquired by killing animals.

Upgrading will be essential to Bayek’s survival against enemies ranked higher than himself. The option to take higher ranked enemies on is there but there is only one likely outcome if Bayek isn’t enhanced enough…

The game also allows players to horde as much gear as they like with the fact there is no carrying capacity for weapons, shields, outfits, gear etc. There is however a max capacity for for ammo which makes the player use the crafting in the game.

Legendary weapons and items can be brought off a young child who will also give quests for you to follow. This is a great way to acquire some of the games rarest items and they can be brought in a Heka Chest, it contains a mystery item and you will always get rare or legendary items and the best thing is it’s brought with IN-GAME CURRENCY!!!!

The combat also gets a couple of added features here, the addition of shields and bows. The use of the bow would be best suited for long range but it does add an option to give the player more of a choice and play in their own style. The old favorite hidden blade is still available for assassinations but will need to be crafted to take advantage of it and not bypass the progression of the system.

With the bows being added to the game there are actually four different types of bow all with many different variations of each one such as rarity.

As with the melee weapons all bows have options such as some being poison tipped and others that flame on use.

Stealth looks a very strong way to play in the game and the chain kill assassination is one to watch!

Mentioned earlier was the ability tree to unlock certain abilities and one of the was animal taming, Bayek can tame animals such as the Hippo to aid him in combat, Senu the eagle who is used to scout areas will also help out in combat.

Health regeneration is done as soon as the player leaves combat, there are no potions but abilities can be gained to change the way Bayek regains health after it’s lost.

Players will have the ability to completely customise Bayek with multiple different outfits and cosmetics. Plenty of work has clearly gone into customisation to really add to the RPG feel.

All the new features combined with some of the old are really shaping Origins up to be one of the best games of the year and we can’t wait to get exploring ancient Egypt!

Check out the official Assassins Creed Website to buy or for more information.

This post will be updated as we get more details so please keep checking back for all the latest Assassins Creed Origins news.