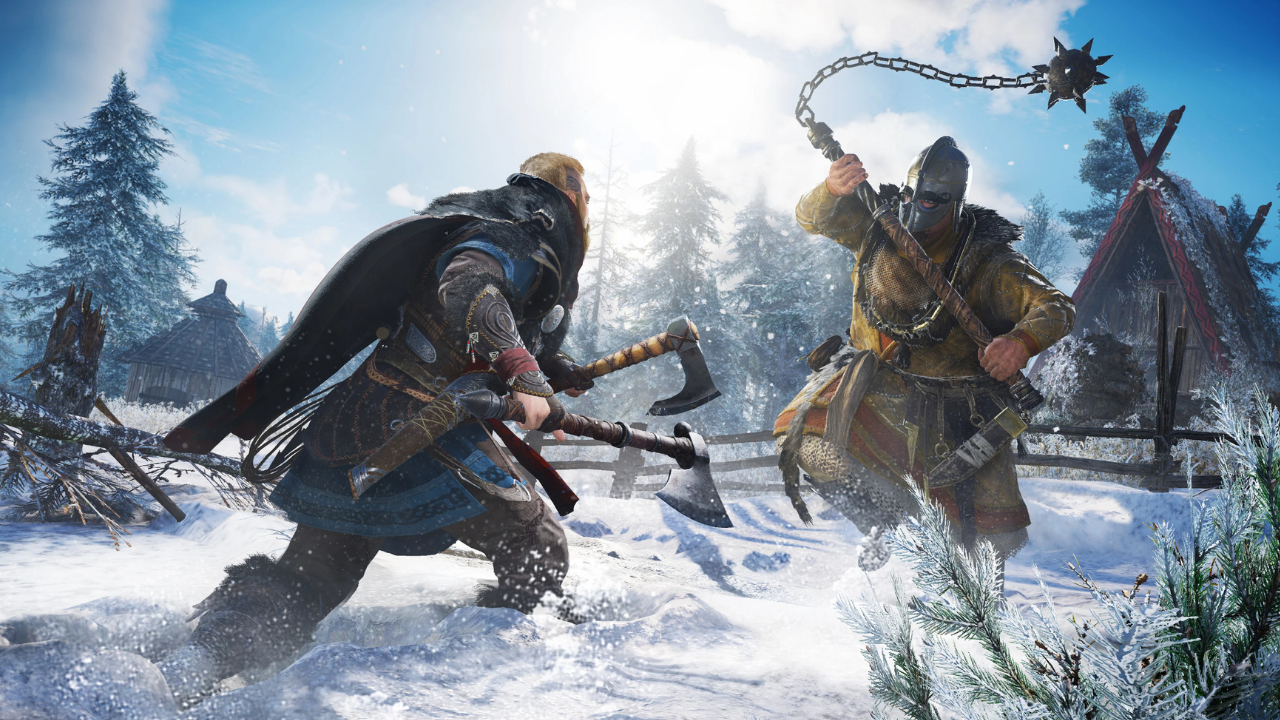 It is fair to say many people were left disappointed with the selection of the third party next-gen games that were shown off yesterday. Assassins Creed Valhalla was one of the high profiles games in the list.

While the announcement trailer a few days ago gave us a good idea about the games setting and main character Eivor, it didn’t really show anything about the actual gameplay or anything else.

The trailer yesterday gave us more of an idea of what to expect and some visual details of things to come. Obviously the game looked fantastic with plenty of detail everywhere! It also showed off some of the ways we will be able to travel and explore the games massive open world, some of the combat and weaponry as well as some iconic places such as Stonehenge!

Watching the trailer through I have picked out some of the standout bits that show what we need to expect from the latest in the long series from Ubisoft.

The trailer begins looking into the bright blue eyes of main character Eivor, a Viking raider and clan leader of whom you will control throughout the game.

After this part fades out we are shown Vikings feasting in a longhouse, a statue of Thor, then a quick close-up of the iconic hidden blade that Eivor will use to take down his foes. Off to sea Eivor captains his ship over the waters with his crew and sails flying high, Eivors raven also flies high in the sky following so we know how we will be exploring vast areas of this beautiful open world.

Tattoos are so detailed on the Viking leader they can even be customised.

The place setting then shifts to England and we get an amazing picturesque view of the landscape, the trailer speeds through time showing hillsides until we finally reach a rather imposing image of Stonehenge. It is from here the trailer steps up the ante, torches are lit and we get to see a small army and King! Eivor jumps from his longship into the sand, rallies his troops with a horn, then the iconic AC run, he then launches himself at his enemy knee first into their face!

Just after the first takedown, he throws himself at another Saxon solder taking them down to the floor before performing a finishing blow with a dagger! It isn’t all melee combat in the trailer though as we then see Eivor using a bow and throwing hatchet like weaponry.

Eivor is then shown standing in the middle of the flaming destruction caused by himself and his crew, from here it’s back to the close up blue eyes that the trailer started with, the close of this shot has Eivor’s raven land on his shoulder for a nice close-up shot.

Assassin’s Creed Valhalla will feature Microsoft’s Smart Delivery at launch, this means purchasing and playing the game on Xbox One will automatically add it to your library on Xbox Series X when that version is released. Valhalla is due to release sometime in holiday 2020

I have included all screenshots and the original announcement trailer below for anyone that hasn’t already seen them.

Advanced RPG mechanics allow you to shape the growth of your character and influence the world around you. With every choice you make, from political alliances and combat strategy to dialogue and gear progression, you will carve your own path to glory.

Dual-wield powerful weapons such as axes, swords, and even shields to relive the ruthless fighting style of the Viking warriors. Brutally decapitate your foes, vanquish them from afar, or stealthily assassinate targets with your hidden blade. Challenge yourself with the most varied collection of deadly enemies ever found in an Assassin’s Creed game.

Sail from the harsh and mysterious shores of Norway to the beautiful but forbidding kingdoms of England and beyond. Immerse yourself in the Viking way of life through fishing, hunting, drinking games, and more.

Launch massive assaults against Saxon troops and fortresses throughout England. Lead your clan in surprise attacks from your longship and pillage enemy territories to bring riches and resources back to your people.

Construct and upgrade buildings that allow for deep customization, including a barracks, blacksmith, tattoo parlor, and more. Recruit new members to your clan and personalize your Viking experience.

Valhalla will be coming to PC, Xbox One & PS4 holiday 2020, it will also be available for next gen consoles with the PS5 & Xbox Series X due out later this year.