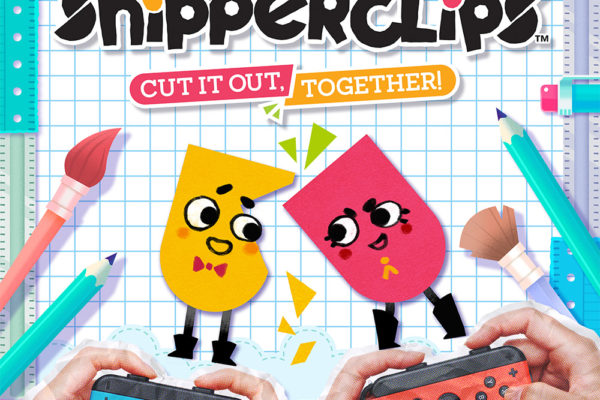 With very few Launch titles for the Switch does Nintendo’s own e-Shop game Snipperclips live up to its hype?

Here’s a look at the launch trailer:

Ok this is where Snipperclips stands out, it’s such simple mechanics but yet so much fun,  you both grab a Joy-Con each and control your own characters named Snip and Clip , both characters can cut the other one where they overlap each other. You will both have to work together to make each other the right shape to complete the level.

There is plenty of variety in Snipperclips as you progress through the levels, from guiding a fly to a zapper, dunking a basketball and helping a hamster in a ball through a tube!

What’s great is the game isn’t taking itself to serious, you can run around cutting lumps out of each other and just regenerate yourself back to you original shape. It has a mobile game type feel to it and does make it great for playing on the go as you can happily pick up and play for 5 minutes or if you have the time 2 hours, either way it’s great fun and will keep you hooked!

There is so much satisfaction when you complete a puzzle too, the game doesn’t hold your hand one bit and you will be left solving the puzzles together with no help or guidance so at times it will really have you thinking what you need to do!

Snipperclips also allows you to play single player where you will have to control both Snip and Clip switching between them, I found this a bit of a slog and nowhere near as good as multiplayer. Multiplayer can be player 1-2 players or 2-4 players and with friends this this is where the game really shines and can easily play for hours, playing solo though I really don’t think you should bother trying, some levels really require Snip and Clip to be moving at the same time.

Graphically Snipperclips is very crisp with nice vibrant colours. Levels do have a fair bit of variety and never tend to get boring with their colourful and vibrant designs. Characters Snip and Clip both look a little like a Joy-Con controller, both use facial expressions that change depending on what they are doing at the time.

Music is really good in Snipperclips and some tracks definitely have a Nintendo sound to them.

Players use one Joy-Con each, jumping, cutting and regenerating are handled with the buttons on the right (A,B,X,Y) and turning your character to the right angle is done by the two buttons on the top of the Joy-Con. Strangely there isn’t any gyro controls to spin the characters with the Joy-Con on Snipperclips which I personally think this would have made it even better.

The Joy-Cons can be a little awkward to use especially when making precise movements, but after using them for an about an hour you do get used to them, I have large hands and they are easy and comfortable to use.

Snipperclips is available on the e-Shop for £17.99. Which may seem a little steep to some but in fairness its’ great value. The amount of levels on offer and the multiplayer experience are worth every penny. Snipperclips will get you playing and working together to solve some complex puzzles as well as being one of the best launch titles for the Switch.

Snipperclips is great value, with many complex puzzles and excellent multiplayer it’s price is well justified. Using two Joy-Cons means you have the multiplayer straight away with the switch as it was always intended. With few launch titles this has to be the other title you buy right after Zelda! The game really showcases the Switches ability to do both portable or home mode as it’s so pick up and play.