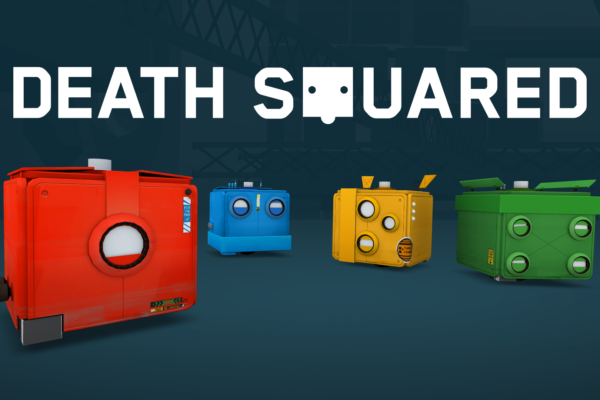 Games like Death Squared are something that really plays to the Nintendo Switch’s strengths with it’s portability, multiplayer as well as solid solo mode but how does the game actually perform?

From developers SMG, Death Squared is a couch co-operative puzzle game where a team of robots work together to escape an ominous laboratory.

Plenty of content on offer to keep players entertained.

Death Squared is complete with an 80-stage campaign for up-to-two players, 40 additional four-player party mode puzzles and plenty of unlockable vault content, this also includes Nintendo Switch-exclusive levels unseen in the previously-released PlayStation 4, PC and Xbox One versions of the game

The aim of Death Squared is to guide your coloured square robot to the same coloured base, sounds easy but trust us it isn’t!

One thing this game will get the player to do is think! There are times you have to just stop and look to try and work out how you can actually get your robot to the end, the other thing the game does well is frustrate! Many times we have worked all the way to the end of the level to put one of the robots on their designated coloured base to find spikes come out the of the floor under the other cube destroying it resulting in starting the whole level again!

The game will constantly throw challenges at you. Some levels will start with the inverted controls, others will have coloured blocks that only effect the same coloured robot and could push it off the stage resulting in a fail and requiring the player to restart the level. Some levels also have lasers which can be blocked with the same coloured robot, sometimes this needs to be done to shield the other robot and safely guide it to the end of the stage!

It’s easy to get hooked looking for perfection on each stage.

One of Death Squared main strengths is it’s addictive! I always found every time I failed I couldn’t give up until I managed to solve the puzzle and then always end up just doing one more level..

The game also stores all progress and how many times you fail so players are able to replay the levels to improve the speed at which it was completed or to try and complete the level with less deaths!

Graphically Death Squared isn’t much to look at with very basic visuals but everything is smooth and clear.

With the graphics being fairly basic everything runs really smooth with no noticeable frame drops or graphical problems. Each stage is set out differently and like I’ve said before some levels can be very challenging! Where the challenge comes from is the traps, if the robot makes contact with the coloured block the same as itself it can trigger changes to the whole level, there is no warning or hint of which block may move and there’s also the hidden traps such as spikes or lasers so Death Squared will always keep the player on their toes!

Controls are smooth and work perfect on the Switch

The robots are moved around the stage with the left and right analog sticks and each stick controls a different robot in the single player mode. The robots can also be tipped on their edges with the D-Pad which can help dodge spikes that can appear throughout the stage. Players are also able to interact with the robots with the ability to make them close eyes, flashing the little light on the top, ducking down and twisting all with the A, B, X, Y buttons.

Some solid voice acting which at times is actually funny!

There is some decent voice acting during each stage, testing technician David Vanenzuela and AI computer Iris will constantly be firing off little jokes and talking to each other to keep everything from getting boring.

If puzzles are your thing Death Squared should be something to get especially on Nintendo Switch!

Death Squared is a game for most people into puzzle games, if you are a solo player there is a really decent sized campagn and then for players into co-op multiplayer there is plenty there too. The portability of the Nintendo Switch makes this game ideal for them boring train journey’s or just quick play sessions.

With plenty on content on offer, multiplayer, good controls and voice acting it’s hard not to recommend Death Squared. Anyone into puzzle games is sure to love what’s on offer here! Another solid multiplayer game added to the growing list of success on the Nintendo Switch.