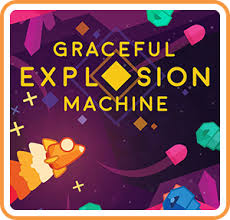 Nintendo added an addictive 2D shooter to it’s impressive lineup on the Switch but how does Graceful Explosion Machine actually perform on Nintendo’s portable console.

Straight into the game by hitting play there are a couple of tutorial levels to get the basics of the game out of the way and from there players will be put straight into the levels and challenged with waves of enemies.

The galaxy map on the menu for the level shows four different planets with each one containing nine different levels.

Graphics are basic but still great to look at with bright colours and clear objects and levels.

Before going into the actual graphics the performance is brilliant on the Switch everything is fast and smooth and zero lag at all.

The 2D graphics are simple but everything is bright, colourful and clean with small detailed areas. Each level is laid out fairly similar and all are challenging due to it’s very tight layout making the player move to avoid getting boxed in by the enemies all bearing down on the ships position.

The players ship and enemies are also basic shapes, all with enough detail to clearly see which is which. Each of the enemies has different attacks and characteristics, some will charge at you and others will fire at you so keeping moving is essential.

The controls work incredibly well with slick and fast movement as well as being able to dash and spin round, keeping the enemies from surrounding the player. Each of the A, B, X and Y buttons control the ships weapons and each weapon handles different enemies better than others.

The players ship has four weapons:

No good button mashing to get out of tight situations…

Each of these weapons uses up the ships power, some weapons use more than others though so planning the use is essential as using the Burst-Fire Missiles to many times will cause the player to be left with no power and just the blaster to defend themselves until that overheats. Small crystals from taking down enemies refills the power bar but planning attacks is a far easier way to stay alive.

The combo system is something I personally really liked! There is just a sense of achievement when you manage to string a huge combo together, this is by no means easy as just three hits and the player will be forced to start that section all over again.

The difficulty on Graceful Explosion Machine is just right, some levels can really get the adrenaline going while stringing together a massive combo and dashing out of tight situations, but it is all by no means easy as three hits will be enough to end the life of your little yellow ship and require the player to start that section again!

With the online leader board as well players get a real sense of achievement finishing in a good spot and beating friends, this also adds to the addictiveness of the whole game making players feel like going back and trying to better their score from the previous try.

One major thing the Nintendo Switch has over it’s rivals with this game is the really impressive HD Rumble, players can really feel what the ship is doing by the rumble it sends out!

Personally from putting numerous hours into both the PC and Switch versions it has to be said the preferred platform was the Nintendo Switch, it’s just a fun, addictive game that playing on the go just feels right! The game is by no means bad on the PC and with a controller feels fantastic but the pick up and play of the switch wins here!

Smooth, fast and exciting gameplay added with vibrant colours and smooth visuals all make Graceful Explosion Machine and joy to play. Also with leaderboards and challenge modes available the game will always have players coming back for more!