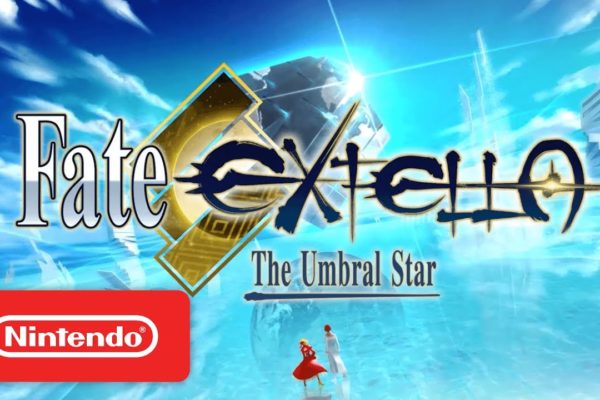 The frantic hack and slash Fate/Extella makes it’s way onto the Nintendo Switch.

Unfamiliar to the Fate franchise? I was too but it does seem that Fate has been around alot longer than you would imagine, starting all the way back in 2004 and steadily growing to the latest entry The Umbral Star, the first time the series has been taken into the hack and slash gameplay.

This game was originally released on the Playstation 4 and Vita in 2016 but has now made it’s way onto the Nintendo Switch, including all DLC and even an exclusive costume.

Set in a digital realm SE.RA.PH, the Holy Grail War is over! The lands new ruler faces threats and challenges from every direction and the servants now find themselves in unlikely alliances, preparing for conflict that may soon tear SE. RA. PH apart or even destroy it completely.

Being unfamiliar to the series it did take a little while to get to grips with whats happening, Extella takes the player into a digital realm that has been in conflict known as the Holy Grail War, it’s finally come to an end, only for the peace to be soon shattered when enemies appear and threaten the masters reign of SE. RA. PH.

Three different stories to play through!

Fate/Extella is set in three different main stories, each with it’s own different servant.

The servant on offer first in the main story is Nero Claudius, she is the servant for her “Master” and also holds a ring called a Regalia which is capable of holding her master inside. The enemy that soon appears into the game to threaten Nero’s reign to SE. RA. PH is also wielding a regalia with her own “Master” claiming that she will be taking over.

All a little confusing I know but it does make sense once you get a bit further into the game so don’t worry!

Characters are well drawn up and any fans of anime will really appreciate the drawing style. The ‘Master’ and ‘Servant’ have rather steamy chats in the bedroom at times and players can clearly see the relationship building throughout. Some dialogue choices are needed through the game and this can affect how the ‘Master’ and ‘Servant’ respond to each other and how the bond grows.

Fate/Extella is complete mayhem on screen but fun!

To the gameplay then and this is where Fate/Extella really gets a little mad! Taking control of the selected servant you will be in control of a massively overpowered fighting machine able to take down endless waves of enemies!

Stages are set out in sectors and players will need to clear each sector on the map to progress. Each section will be filled with hundreds of enemies and expect the combo counter to go into the thousands… Once you have cleared all the low level enemies the Aggressors will appear, these need to be taken down to control each sector.

It’s not as easy as just going through each sector and taking it as other sectors that you have already taken will come under attack and you will need to move fast back the sector to defend it, otherwise the sector will be lost again and will need to be attacked and taken all over again.

The ‘Regime Matrix’ system will have different sectors and these sectors are worth different amounts of keys. Fifteen keys are in view at the top of the screen and each sector will be worth a different amount of keys so there will need to be some planning before attack to make sure you are taking and defending the higher priority sectors available.

One thing that was a let down was the camera, it really struggles at time to keep up with the mayhem that’s going on but it’s not terrible, getting the hang of keeping it in the right place is the hardest part but doesn’t ruin the experience at all.

Travelling between sectors is done by going to the block on the map in the sector and it uses like a warp zone to put you in the next sector. With this ability players are able to make their way to different sectors fast to defend or attack.

The actual controls feel sharp and the speed of the character gives you a real sense of power. Attacks are made by a bit of button mashing, there are combos to master and a special Extella Maneuver. The Extella Maneuver is activated by pressing the A button, this then will unleash a massive attack on your enemies and engulf them in flames causing massive damage! The Extella Maneuver can be used at anytime as long as you have at least one bar in the gauge at the bottom of the screen, any extra bars can be used to deal further damage by pressing the A button during the maneuver.

Your character also possesses a dash ability which is by far the fastest way to travel, jumping also allows an air dash which can be linked together.

While Fate/Extella isn’t really any different to the PS4 edition it does fit perfectly with the portability of the Nintendo Switch and is great fun on the go. Graphically it does also impress with it’s beautiful art style and characters, performance is also impressive with no noticeable slow down which is really impressive considering how much is actually happening on screen while hundreds of enemies at a time are being slaughtered.

The soundtrack is a perfect fit for the game and full Japanese voice acting is a nice touch, it’s a shame there isn’t English voice acting but the subtitles are ok.

There is plenty to do in the story mode with three different main stories to play through as well as side stories and free battle mode to practice combos and perfect taking down the masses of enemies.

There is also the ability to unlock new moves for the characters and support options that will be mapped to the D-Pad,keeping things feeling fresh and helping to stop play getting repetitive.

Although there is no multiplayer and this is totally a single player experience there is so much on offer here to do it really doesn’t feel like it’s lacking because of it.

Beautiful art style, smooth and fast performance make Fate/Extella feel a very polished experience. Plenty of content on offer to keep players busy as well as unlockable bonuses to keep things from turning stale! Camera angles can cause issues but not gamebreaking.