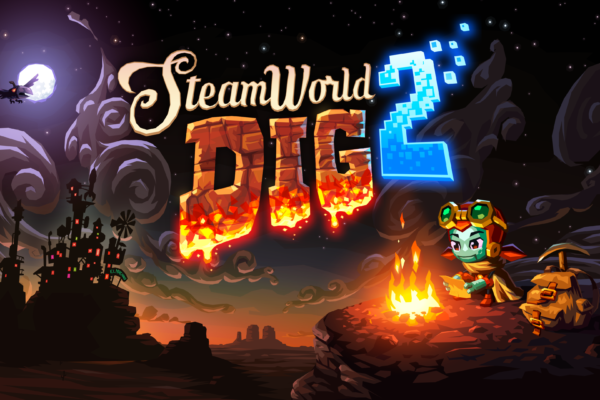 SteamWorld Dig 2 will be available on on the following:

The sequel to the highly popular SteamWorld Dig is finally here! How does it stack up against it’s predecessor? We take a look to find out!

Dorothy sets out on her adventure to find Rusty along the way adding an unlikely ally in an enemy by the name of Fen. As Dorothy progresses through the underground she will sometimes come across these strange machines that apply power ups such as being able to sprint.

After finally breaking through rocks and making her way to the surface it’s time to meet everyone in a town called El Machino, this is like a home where there is a trader and also a place to make use of the workbench.

Without to many spoilers after talking to certain people in the town Dorothy is made aware her lost friend Rusty has gone missing in the mines below the town. From here she will sent on a quest to mine ore to then sell on and buy a new torch which got broken when she fell into the ground, once acquired from the trader Dorothy will finally be allowed into the real mine to look for Rusty.

In the mines players will come across all sorts of ore ranging in different values which can all be sold to the trader in town, with this currency Dorothy can then use the workbench which provides upgrades and new items. The upgrades are brought through upgrade cogs which are scattered around the mines for you to find.

When collecting the ores in the mines players will need to plan before they start axing away as Dorothy can only axe left and right and up and down and this can’t be down while jumping so planning before hitting is key! As you progress you will gain access to other options such as weapons and these can help reach ore that is to high to hit.

Upgrades are essential and speed up the process

Upgrades to the axe are essential and make light work of tougher block, some blocks will take three hits to break where as others take just one. With the axe upgrades the blocks requiring three hits would then require 2 making movement underground much faster!

Some blocks can’t actually be broken at all while others have to be hit from certain sides to destroy them.

While down in the mine Dorothy will need to come up to sell some of the goods she has collected as there is only so much she can carry (this can also be upgraded) At first she will have to climb all the way up to the top by wall jumping all the way up but as she progresses deeper into the mine she will find passages that are blocked, hit them with the axe to clear it out, providing a way of fast travelling to each place including straight into town.

Light is also a major factor in surviving under the surface, the lamp that Dorothy carries will run out of fuel once the gauge in the top left corner runs dry, it’s essential to keep this topped up otherwise things can get dark very quickly. There are lamps scattered around the mines for you to light but Dorothy’s lamp is essential!

Is that a rhino spider thing?

Enemies are scattered throughout the mines and can pose a real threat, from the weird looking rhino spider things which are either walking around or hiding in the breakable blocks, the exploding cactus looking plant and the boulders there is always something to keep you on your toes!

While the boulders can cause a real threat to Dorothy they can also be a bit of a weapon! These sit on top of breakable blocks and if you knock the block below out from under it the boulder will fall, killing Dorothy if she is under it! These can also be used as a weapon and if timed right will kill an enemy in one hit!

SteamWorld Dig 2 is not groundbreaking visually but it does look beautiful! Colours are rich and vibrant as well as fantastic lighting effects all make it a joy to look at! Level design is also really good and gives the player plenty of choice where they want to go and what they want to do and with this title being fully hand-drawn it’s a clear improvement over the original!

I personally found the game really addictive trying to uncover some expensive ore to sell and upgrade weapons and items, while unearthing some of the mines deepest secrets kept me exploring for hours on end.

A little on the sound, there is no voice acting but the story is easy enough to follow and your not bombarded with constant reading and music is well matched to Steam World Dig with unintrusive calm background music.

On the Nintendo Switch controls are brilliant and as usual fits perfectly with the Switch’s portability and being able to play on the go. The game autosaves often making it a game you can pick up and play and come back to for short play times.

Performance wise again it was perfect no lag or slowdown at all in either docked or undocked mode!

Check out a full 45 minutes of in-game footage below:

With great visuals and lighting as well as being really well suited to the Nintendo Switch’s portability SteamWorld Dig 2 is a worthy successor to the award winning Predecessor. Great value for money and addictive enough to keep players coming back for more with the upgrades and weapons to be unlocked as well as the huge area on offer to explore!