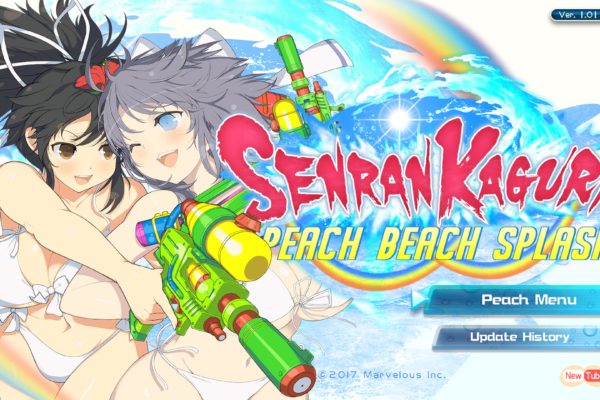 Senran Kagura is due for release on playstation 4 September 22nd

Senran Kagura Peach Beach Splash is a 3rd person shooter except with a couple of things making it very different to almost anything I have ever seen or played! The use of water guns and Bikinis!

Anyone new to this series will probably be left thinking exactly the same as myself “What the hell am I playing!”

Senran Kagura will first have players play through some of the training to familiarise yourself with the controls. Once this is complete it is then up to you where you want to go next, this can be from the story mode to the shop or even the dressing room/Showers! I’m not even sure I can post some of this stuff!

Peach menu has plenty to choose from:

Single splash is basically the single player story mode where players will need to complete the missions set and take out bosses at the end these included a giant nude women in the bath and you are tasked with shooting away all the bath foam that covers her body! (Yep I said this game was mad) There is also two other modes in single splash, Paradise episodes which focuses on episodes with individual characters and also there is V-Road challenge which is an action mode where players play to win in game cards and money.

The Multi splash is an online mode and features three modes and these are ranked match, putting players against each other to fight their way up the ranked leaderboard. Free Match which is basically the same as the ranked match just without posting anything on the leaderboard and then there is co-op survival  which allows players to team up and survive as long as possible against hordes of enemies.

Plenty of unlockables and i’m sure there are some people out there that may like certain options :s

I have no idea who makes this stuff up!

If that’s what you are into the options are there to keep some entertained for hours! Each character can be customised as shown in the video and players can select the character they want to use.

There is also a shop mode where the in game money that is awarded can be spent, the shop even gives the player the option to choose who they want as the shop keeper!

The wacky things aside how does the game play?

Once players actually get playing there is a fairly good shooting game under all this, it is third person and can be a little frantic but fun at the same time. Guns are all different and range from a little hand gun to a water balloon shooting grenade launcher so players will need to find the right balance for them to suit their playing style.

Characters are also customised with equippable cards that can adjust weapon, skill, and companionship. These cards will trigger various effects such as restoring health to summoning another character to fight alongside the players character.

The gameplay itself is as said earlier a little mad at times and can be hard to even see where you are shooting as the camera can go a little mad as well but it is by no means terrible.

The shinobi you control will be able to slide and jump as well as being able to hover with water jets to make them climb higher, these do run out and holding the square button will have the selected character pump away to refill the water tank, this is also the same for shooting as they both run off the same tanks.

You will be in for plenty of reading.

Senran Kagura does not feature any English language at all so that may well put a few off but at the same time I don’t think it would seem right if they were speaking English so there is plenty of subtitle reading to do throughout if you want to actually keep up with what is actually happening in the story.

The game does feature plenty of music and it all fits well with Senran Kagura’s wacky style and mad gameplay!

While some may love the wacky gameplay and some of the things literally on offer (Gropping anime women) some will just find it a little to much. The gameplay itself is ok and different with the use of water pistols but can feel very clunky and the camera can be a little off at times making it a frustrating experience. Plenty of modes and customisation add a lot to the title but it needs more than just boobs bouncing around to make it up there with other top shooters.