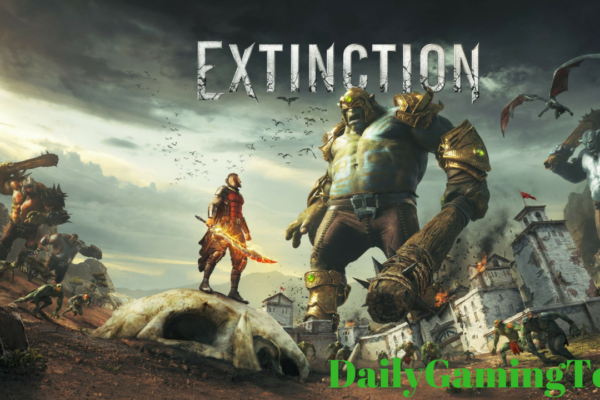 Interested in chopping down (literally) massively destructive ogres? Extinction looks one to watch going into 2018.

Extinction will put the player in the shoes of Avil, he’s the last remaining sentinel and the only one that holds the power to save mankind!

With the ability to traverse around an interactive environment players will need to move quickly across rooftops, alongside buildings and atop many man-made structures. Avil will have to tackle encroaching hordes, taking down endless waves of Ravenii with his powers as a trained Sentinel! While the smaller minions in these hordes may seem easy to keep at hand the bigger problem is just on the horizon!

All the armies of ogres are equipped with their own weapons and armour, Avil will need to use tactical thinking, the structure of the environment and even the enemies themselves in order to quickly clear the giants before they destroy all that’s left of the world and cause extinction to man-kind!

Needing more than just raw power, Avil will need to use strategy, cunning and quick thinking to permanently take down ogres, armoured in everything they can find such as: layers of bone, iron, spikes, thorns, and dark steel.

Avil will fight the giants in real-time combat, there is however only one way to slow them down and actually stop them and that’s decapitation! Ravenii decked out with spiked armour won’t be east to bring down and will injure Avil if it makes contact with him, therefore he must lure the spiked Ravenii into smashing the ground, this eventually smashing it’s own armour and breaking off. Avil can then sever a limb, vertically run up the monsters torso and then perform the finishing blow Sentinels powerful rune strike!

Extinction will be available on PlayStation 4, Xbox One and PC in Q1 2018.