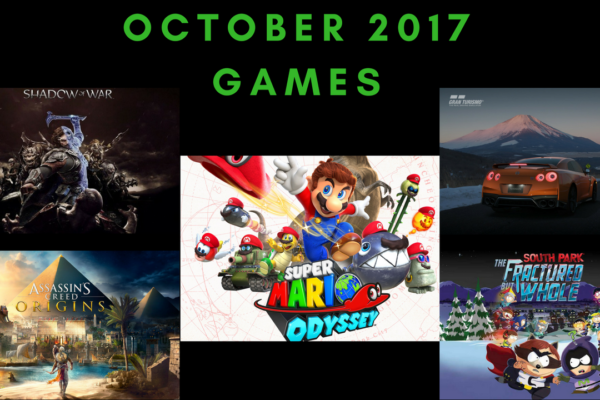 September was a great month for gaming with top titles such as Fifa 18, Project Cars 2 and Destiny 2 just to name a few, we take a look into what’s coming in October?

Available on Xbox One and Windows 10 PC

Forza Motorsport 7 can be played now by purchasing the ultimate edition or the standard edition releases October 3rd.

With over 700 licensed cars and over 30 tracks Forza Motorsport 7 carrys on tradition with it’s usual amount of high content. One major thing added to this years title is the dynamic weather Effects! Visuals look amazing and that is on an Xbox One so roll on the Xbox One X in 4k November 7th!

Shadow of War will be available on Xbox One, PS4 and PC.

Middle Earth: Shadow of War is due for release October 10th.

Continuing from the previous game’s narrative players continue the story of Talion and spirit of elf lord Celebeimor, while sharing the Talion’s body they are to forge a new Ring of Poer to build an army to fight against Sauron!

The latest trailer for Warner Bros can be found HERE

South Park The Fractured But Whole

The Fractured But Whole (What a title! haha) will be available on PC, PS4 and Xbox One

South Park fans will be able to play this latest game from Ubisoft from October 17th.

The creators of South Park, Trey Parker and Matt stone have made a sequel to the award winning 2014 South Park: The Stick Of Truth. The Fractured But Whole will have players delving into the crime-ridden underbelly of South Park with Coon and Friends as one of twelve superhero classes.

Great to see after all these years South Park is still going strong!

Elex will be available on PS4, Xbox One and PC.

From the developers of Gothic and Risen, Piranha Bytes have developed a science fantasy themed role playing game. Published by THQ Nordic players will enter an open world after a meteor hit the planet leaving the world in pieces, although the discovery of something new changes everything, Elex an element that’s unknown but could fuel technology and change the world offering some the ability to harness it’s power!

Gran Turismo Sport will be available only on PS4

Players will be able to play one of the most anticipated games of 2017 on October 18th.

Gran Turismo Sport is a racing sim offering 177 cars from launch with every car modelled from the ground up. There will also be 19 different locations to race on with 28 different configurations to the layout with real life circuit’s like Brands Hatch included.

Featuring 4K, 60FPS and HDR meaning it should offer outstanding visuals as well as confirming compatibility with Playstation VR

PC players have had to wait a little longer than console owners for Destiny 2 but it’s coming to PC October 24th and worth the wait!

Destiny 2 features an all new campaign as well as intense competitive multiplayer as players journey across unexplored worlds to discover new weapons and items while levelling up characters along the way to achieve maximum power level!

Wolfenstein II will be available on Xbox One, PS4 and PC.

The long awaited sequel will be available October 27th.

Wolfenstein II: The new colossus puts players back in the shoes of General Deathshand assassinator BJ Blazkowicz aka “Terror-Billy”. Blazkowicz will be Sparking the second American Revolution, only you will just have guts, guns and gumption to return stateside and release the Nazi stranglehold on the world!

Join Mario in a massive 3D globe trotting adventure to rescue the Princess from Bowser’s wedding plans!. Using Mario’s new abilities thanks to new friend Cappy, players will have the ability to to control many enemies, animals and objects with while adventuring the globe.

Super Mario Odyssey is arguably one of the biggest releases of October and is something that everyone with a Nintendo Switch should get their hands on!

Fans of the Assassins Creed series will be able to get their hands on the latest in the series October 27th.

The third person action adventure game is back this month with the game set in Ancient Egypt. Origins features a new assassin all set in a new massive open world, features such as looting weapons off fallen foes and levelling your character up are all on offer and pushing Assassins Creed into the RPG section even more!

There is our list of nine to look at, with the Xbox One X just around the corner coming November 7th it’s a very exciting (and expensive!) few months for gaming!