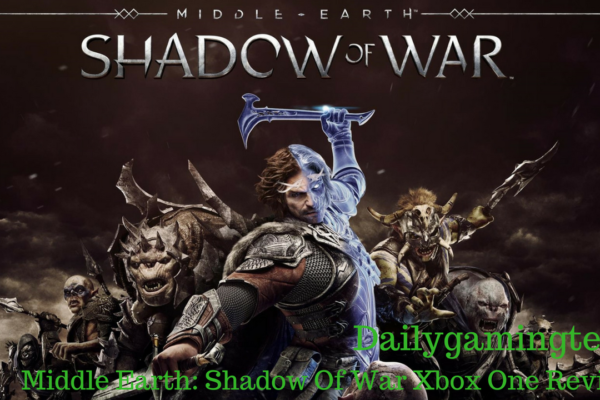 With Shadow Of Mordor being one of the best games in 2014 the news that Shadow Of War was to be released was just what fans of the series wanted to hear! Coming to PS4, PS4 Pro, PC, Xbox One and the soon to be released Xbox One X, pretty much all gamers will be able to experience the sequel to one of 2014’s best games!

Shadow Of War Is Certainly A Looker!

One of the first things you will probably notice when playing on the PS4 Pro is how good the visuals look and how smooth everything runs! Playing on the Xbox One was by no means bad but the difference is pretty clear to see with the PS4 Pro using both HDR and 4k everything looks so much cleaner and crisp! The colours and lighting effects are really impressive with HDR showing it’s advantages over the Xbox One version. The Xbox One version will get an enhancement for the Xbox One X and we can’t wait to see how it looks!

Cut scenes look photo realistic with facial animations being another really strong point and could show another certain game “cough cough Andromeda” how it is done! The voice acting is also spot on with plenty of variety and accuracy making characters very believable.

The story puts the player in the shoes of Talion, picking up from the previous adventure Talion is working with the spirit elf lord Celebrimbor to forge a new ring of power to defeat the evil lord Sauron. This ring is immediately lost to a giant spider called Shelob, a Witch Queen who forces Talion to hand over the ring of power in a trade for the Spirit elf Celebrimbor who was lost in making of the new ring. We won’t go into to much detail and provide any spoilers so don’t worry you can keep reading!

Orcs personalities are all different and rivalries will build with Talion himself!

The Nemesis system is brilliant and combined with the great story, players will be kept entertained for a very long time. The Nemesis system adds so much variety to the game as each of the Captains, Warchiefs and Overlords all have their own personalities which adjust to what happens with you during the game. Being defeated by any of them will lead to Talion being taunted about it while also increasing their rank and making them harder to kill in battle the next time.

Defeating certain orcs will result in gear being rewarded as well as others that drop gems, these can upgrade Talion’s weapons, armour and bow! Each bit of gear has a level and as you progress through the game higher level gear will be rewarded.

The video below showcases the Elven Rage move as well as some of the facial animations and the rewarded gift at the end of the battle.

Information can be found by interrogating the weaker orcs called worms. Talion will need to sneak up to them and interrogate them from the information.

which then reveal some of the weaknesses and strengths of the Captains and other higher ranked orcs. This is essential in battle, knowing the opponents weaknesses and  can make all the difference as some things such as acrobatics can make the orc go berserk and make them harder to handle.

Taking down higher ranked Uruks is never easy as the majority of the time you will get swamped by enemy groups and it can be difficult to defend against them all. Solders will sometimes join in to help but don’t tend to last long so it’s either fight your way out or run! When being swamped strategy helps as taking down the long range enemies with cross bows and spears is a must because they are so hard to defend against, while most smaller attacks can be countered and dodged.

The thing I love about Shadow Of War is there is always something to do! I always ended up meaning to go to the next quest on the map only to get sidetracked into a fight with a Captain or a group of orcs taking prisoners, it’s just really easy to come off the task at hand to scrap with everything in sight and it never gets boring! (Well not for me at least)

Gameplay is as good as ever!

The gameplay, I personally found it slightly more responsive than it’s predecessor but something that has not changed is the thrilling way it plays! Combat is still as good as ever, it’s fun, powerful, responsive and accurate! The way you can string combos of kills together with counter attacks, dodging and wraith stuns just makes you feel God like! Everything is so responsive even that last minute press to get the block in when you convince yourself you hit it too late still seems to come off!

The only negative I found with the gameplay has to be the movement at times especially while running, I found myself fleeing from battle a few times only to get stuck on a curb or Talion deciding to run up a wall or post I meant to run past! This isn’t terrible just something that I did find frustrating at times especially when trying to get away with low health.

Low health can be an issue at times especially if you get caught out in battle and get swamped but this can easily be replenished by draining it from enemy orcs, you can also drain from rats and spiders too so there is always an option to heal somewhere if you get the chance while battling!

Voice acting and facial animations are up there with the best.

As well as the voice acting the sounds are on point too! Great backing music as well as sound effects that sound so real you don’t actually want to look making Shadow Of War a game not for the faint-hearted!

One thing the PS4 has over the Xbox One is the controller speaker and it’s great use of it. Often background game noises will be heard coming through the controller and will increase in volume the closer you get to the source noise!

Developers listened and added a much needed and wanted feature!

Where Shadow Of War is different to it’s predecessor is with the addition of Fortresses after the end game. This mode allows players to take their army of orcs on a massive invasion to conquer the enemy fortress, orcs can be customised and upgraded before each assault giving the game a certain amount of strategy. Picking your army to exploit the weaknesses of your enemy could be the difference in winning or losing!

Battles are on a huge scale and hundreds of orcs will be seen running around slashing each other to pieces. As well as orcs though there is also beasts such as the Caragor which can be mounted as well as the massive Siege Beasts and Olag-Hai which is a massive beast with a huge club and can be used as a bit of a battering ram.

Once the walls have been breached and the victory points are captured it will be time to enter the fortress, players will be required to enter the throne room and this is where things get tougher! You can summon your selected bodyguard and in here you will be tasked to take down multiple enemy orcs as well as a very powerful war-chief!

Once you take down the War-chief, Talion will be left with three options: Shame – which reduces their level, fight to the death – Is what it says really and gives the chance of Legendary gear being dropped or recruit which allows you to add the war-chief to your orc army. Once the Warchief is defeated the fortress is yours and can be upgraded and defended.

Fortresses is a really fun feature and adds so much after the end game, there is plenty of options to vary the play up in this mode and it’s a great feature that has been added which many players of the previous title were crying out for.

WHY!!!! This really wasn’t needed in Shadow Of War, the only reason to buy a loot box would be to get better and stronger orcs for your army but this seems so pointless because fighting them and recruiting them is what makes it all so fun! Seems a silly move and I can’t imagine many will have any part in paying out real money for something that you can have fun earning!

From the time I spent with Shadow Of War so far it’s been a fantastic experience! Great visuals, performance and sound all make it a really great game to get stuck into. The combat is still thrilling as ever and the additions to the Nemesis system and adding fortress mode will have players coming back for more! Shame about the microtransactions but it seems that it’s something a game nowadays has to have!