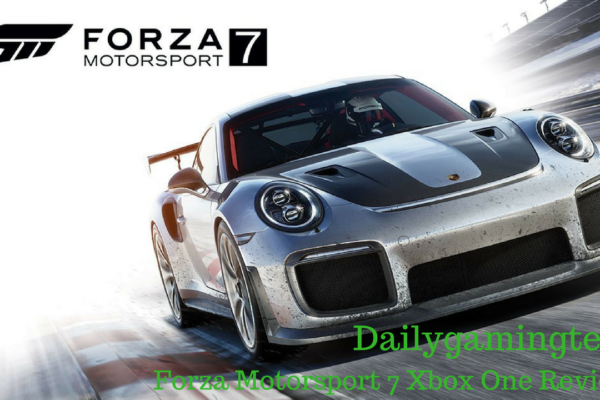 Racing fans it’s here!! Finally we get our hands on the latest in the series Forza Motorsport 7!

With over 700 cars and around 30 tracks Forza has enough content to keep you going until Trump and Kim are friends!

Like many I’m a huge Forza fan and have owned just about every single one that has ever been released, my only worry here is why didn’t Microsoft just hold this back for one more month and launch it on the same day as the Xbox One X?

Zelda BOTW did great launching with the Switch and arguably helped actually sell the console but at the same time it still came out on the Wii U and also did very well so how will Forza perform and should they have waited just one more month to really showcase what the X can do?

Xbox One users will be happy!

So how does Forza 7 actually perform on the Xbox One? Great! no slowdown and the visuals are absolutely fantastic with weather effects that look like the real thing! Rain spreading across the window-screen as well as puddles forming in just about everyplace you wouldn’t want them! One thing it has done is made me think if this looks this good on here what the hell can we expect on the One X! PC gamers will have already experienced this and from my experience so far the visuals are class leading, Project cars 2 released and the weather was great but when we got Forza the improvements were clear!

Where Forza is a little more playable than Project cars though is the handling, things feel much easier on Forza where as Project cars really pushes your driving skills to the limit! Both games benefit massively from a wheel setup and add tons of immersion but Forza is a much more playable game with a controller.

Sounds have improved slightly this year as well, hearing the turbo spool up on that old Cossie and hearing the dump valve blowing off are really authentic and a joy to listen too as you are red lining around the track trying to get every rev possible before the gear change!

The core single player game is constructed of six different championship tiers, each one containing different racing types with some full four or five race championships while others can be challenges like overtaking a certain amount of cars in a set amount of laps. This tends to keep things fresh and doesn’t let it get stale! When you first start only one tier will be available and you will be required to complete races and win championships to collect the required points to open the next tier.

Some races contain great rewards but require skill to win like the endurance lasting around an hour to win a Chevrolet C7.R Racecar.

With all Forza’s great features there is one thing so far this year that has really disappointing and that’s the AI! It’s shocking, other cars stick to the same line, will crash into you at any opportunity as well as just stop randomly when a few cars gather up causing a pile up and are just generally rubbish. This may get better in the future as the “Drivatar data changes and hopefully adds more skill rather than taking the drivers from demolition derby! This is seriously one thing that desperately needs sorting as it can completely kill a race and you will find yourself using that rewind button more than you actually need to because of your own driving skill.

AI aside putting the skill level up will cause more of a challenge as they can actually be pretty hard to beat even without forcing you into a spin with that little nudge, they tend to not really make any mistakes as well as just totally sticking to the racing line like they are on rails.

As you progress through the tiers money may become an issue especially if you are abit of a car collector. This is where mods will come in handy! Mods can be added before a race to boost earnings and driver XP.

Car collection is where most of the credits will end up being spent in you trying to complete the collection so this is where you will really appreciate the mods on offer giving you bonus money and XP.

With five tiers of cars all containing around 723 cars there is a silly amount to actually collect:

Leveling up the driver will be another good way to complete the car collection as everytime you rank up you will be given the choice of either game credits, a car or driver gear.

The majority of the time the obvious choice would be the bonus car as you get a big discount off some of the games most expensive and desirable cars. The other option driver gear is sometimes a good choice offering you a little customisation to the character in way of choosing how they look with plenty of different outfits on offer!

Lastly onto the something that has caused quite a stir and that’s the pay to win crates, these can be brought with just in-game credits at the moment but will be able to be brought with real life money in the future! (as if all that money on the Ultimate edition wasn’t enough!) while at the moment paying huge amounts of credits for the chance to get one of the rarest cars isn’t so bad when real money is introduced it could ruin the whole experience.

These crates contain mods and sometimes rare cars depending on the rarity of the crate brought, while some will appreciate being able to skip straight to getting some of the rarest cars on the games others will probably feel they have paid enough for the game and not join this trend that seems to be in every game going at the moment.

Forza Motorsport 7 is a graphical masterpiece showcasing what even an older generation system can do, the weather effects are absolutely brilliant as well as car and track detail being up there with the best around. The play ability is very newbie friendly and great for anyone new to the racing genre unlike something like Project Cars 2. Two things stop it being the perfect racer this year and that’s the very poor AI and in my opinion the loot boxes. Apart from that with all the cars, tracks and customisation on offer there isn’t much that comes close so far so Forza is a game every racing fan should have in their collection!