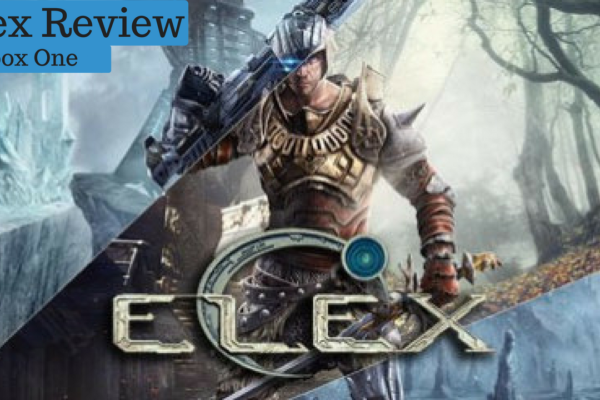 Elex a game developed by Piranha Bytes released October 17th on Xbox One, PS4 and PC.

Tested on Xbox One

Since it’s release it is fair to say the game has had a fairly mixed reaction from gamers and critics alike, we finally got our hands on a copy and here’s what we think..

Elex is an action role-playing game from the creators of the Gothic series, set in a new post-apocalyptic science fantasy universe players will have the ability to explore a huge seamless game world full of original characters, mutated creatures, deep moral choices and powerful action!

Beginning the game you start as an Alb, in a very high rank position your character is sent on a top secret mission. Things don’t go quite to plan and for your failure your tracked down and left dead by the Albs themselves!

Somehow surviving you awaken to no gear, no Elex in your body and completely left for dead. Making your way through the ruins you finally come across an unknown, maybe the person that stole your gear?! confronting him it turns out he is just there to help and after what seemed like an eternity of dialogue, all voice acted though so that helps you can get on your way and follow him to the safe village of Goliet, the settlement for the Berserkers.

During this time noone is aware you are or should I say was associated with the Albs, the large world of Magalan has four different factions controlling their own areas, the Albs which the character you controls originally comes from, the Berserkers, the Outlaws and the Clerics. Each one will try to convince they have the best intentions at heart but do they have a darker secret behind their motives?

Once you have explored the village and gained quests and items for your travels, Magalan is there free to explore and it is a pretty large open world full of beasts, enemy camps and settlements so there is plenty to challenge you and to explore!

If you like a challenge Elex will be something for you!

The difficulty level is one of the first things that was a little off for me, I constantly found myself lowering the difficulty to try and progress through the game because of a constantly under-powered character. This wasn’t just later on in the game it was basically from the start. I spent the majority of my time in Magalan running from battle because it was the only real way to progress rather than sticking around to fight, there is also use of a jetpack which is a great feature and does give players access to explore almost anywhere and helps with escaping those impossible fights..

Characters can be leveled up and will need to be, accessing some of the stronger weapons found in Magalan requires the character to be a certain level before use is even possible. Learning new abilities like casting magic helps but also will depend on the faction you decide to actually side with in which unique abilities you can use.

Leaving the player feeling frustrated is something Elex does well..

Now onto the actual combat in Elex and for me it’s one of it’s major problems, it’s very clumsy, slow and inaccurate! The whole system left me so frustrated at times and just a completely unenjoyable experience, with the speed of the attacks being like slow motion there is no real chain to any attack and then there is the heavy attack which involves a wind up before each swing which completely kills combat. It just all feels a little unfinished.

Glitches are something you will also have to tolerate in Elex, on a few occasions I found myself fleeing from battle (A must in Elex) to jump and then just suddenly die for no reason. The game is littered with bugs throughout including crashes and some cut-scenes not playing but hopefully in time this will be rectified with patches but in it’s current state it feels far from finished.

Not all bad, look at that open world!

Ok so there are some of Elex’s major problems but it isn’t the worst game you will ever play, one of it’s strengths is the art style and design! The game world looks really good, there is a real attention to detail and it can clearly be seen, it’s just such a shame for the other issues as this really could have been up there with some of the other RPG classics we already have.

Now with the game world looking so good are the characters as good? It has to be said no, facial animations are pretty bad and characters all lack any real detail but one other massive positive is the voice acting! You won’t find yourself reading years worth of subtitles as there is full voice acting, for the most part this is also really good, some cheesy and unbelievable lines but as a whole I can complain about not having to read the whole story!

The performance of the game was also ok, there was definitely a frame-rate drop with multiple characters and action onscreen but for the majority things were fairly smooth.

Elex tells the story as you explore the massive world on offer, your characters past slowly comes back through memories in cutscenes as well, the whole experience took over 32 hours to complete which is a good amount of gameplay time but most of it was ruined with some of the technical bugs that Elex has! If you can look past the problems in Elex’s world then it could be worth checking out but for some the problems will just be too much.

From a small developer most of Elex could be classed as a success and with some finishing touches and work in certain places things could have been so much different.

With a beautifully well drawn open world Elex could have been a great RPG title, sadly the whole experience is destroyed by constant glitches, bugs and majorly annoying and slow combat! In it’s current state the whole experience just feels unfinished and hopefully the developers will rectify some of these bugs with future patches. If the bugs are fixed Elex may well be worth picking up but until then most would feel extremely let down.