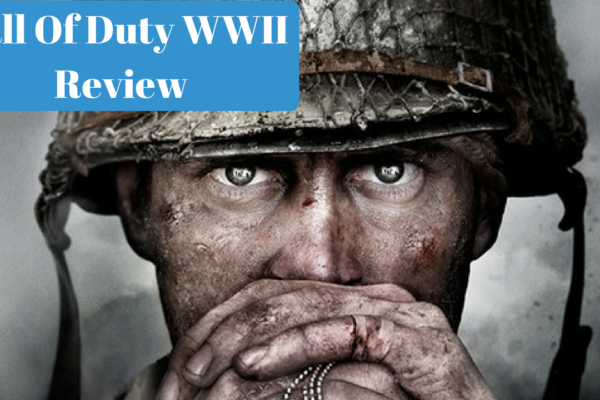 Call Of Duty WWII is available now on Xbox One, PS4 and PC

Tested on both Xbox One and Xbox One X

So after what can only be classed as the unsuccessful launch of Infinite Warfare, Call Of Duty is back and this time it’s really gone back to it’s roots! Call Of Duty WWII replaces the futuristic game play and weaponry with eye opening horrific visuals and real life weapons! Will it be enough to push COD back up to the top of the first person shooters? keep reading to find out!

Jumping straight into the campaign, which in past games most players myself included skipped to hit multiplayer players are put in the shoes of Ronald “Red” Daniels. Daniels plays out the very scripted campaign with brilliant voice acting along with his squad. There is plenty of cheesy lines on offer but nothing too off putting (“Your a long way from Texas Boy”).

There are some key WWII events to be played out through the campaign including D-Day, taking control of Daniels, players will have to make their way up the beach, fighting between each cinematic sequence, the cinematic’s are written with plenty of gore on offer, everything is very graphic and the game doesn’t hold back in what it’s showing the player, things like limbs will be hanging off as well as soldiers being blown up in front of you but the way you go from a little bit of fighting to a cinematic and then the same again can kill the game play as it can be more like watching a film.

Throughout visually COD WWII has to be one of the best looking Call Of Duty games ever made, not quite on the level of Battlefield 1 but it really isn’t far behind! The Xbox version looked great but putting it on the Xbox One X was absolutely beautiful, the crisp clear picture as well as smooth gameplay really shows off what the latest most powerful console can do. With visuals looking gorgeous something has to be said about the level of gore on offer especially as soon as you start on the D-Day mission is a real eye opener, limbs and people will be blown to literally pieces. The actual environments look absolutely fantastic as well with an impressive amount of detail and accuracy in many real world locations, great weather and particle effects finish off what is a very eye pleasing experience.

The characters in the campaign really shine through too, they are well written and all have great facial animations and voice acting, Daniels sadly isn’t all too exciting but characters like Zussman really take the limelight with his personality and script.

The campaign itself lasts about 8 hours and immerses players well into the story, great cinematic’s that I mentioned earlier as well as superbly scripted characters and animations make the whole experience was a very satisfying one, although some scenes are slightly cheesy it’s easy to look past it and enjoy a really good story. One thing I do think has improved in the campaign is the difficulty, you are no longer a one man army! AI is still far from perfect but on a few occasions I was totally caught out with some of the enemy movements! Levels are very scripted but still throw in the odd surprise to keep things exciting. The whole campaign throughout never got boring, plenty of variation with some of the vehicles as well as a few surprises and excitement kept the whole story alive where as others in past titles have faded out and left me on the multiplayer!

Between each mission the player is given the option to change the difficulty setting from recruit, regular, hardened and veteran. This screen also displays the amount of mementos found and heroic actions performed when you last played the mission, there is also a star system on each mission to display the difficulty setting the level was completed on.

A feature worth mentioning in this years COD is the ability to call other squad members that hold certain items. Specific squad members will hold certain items such as health packs, ammo, grenades or binoculars and you will need to request the items on the battlefield and if close enough they will throw them too you, I personally liked this addition and it added to the immersion and the struggle that it would have been back then instead of the endless supply of bullets laying around. Each thing that is requested also has a time period to recharge until you can request another one, this adds a touch of planning to the way you tackle the mission by using supplies carefully and making sure you stick close to the person carrying the item you require. Sticking close to Zussman who carries medical supplies can prove critical as there is zero health regeneration! That’s right hiding behind something to regen health isn’t going to help, the only way to heal is with health packs adding more to the difficulty as well as the realism as there is also a short wait for it to take effect so timing is everything, finding cover and applying the medical kit or fighting on if you think you can make it to another spot of cover are all choices you will find yourself making!

Bringing out the big guns!

Not every bit of fighting will be on foot and the game will occasionally put the playing in control of vehicles as well as some heavy weaponry such as a flak gun or the MG 42 machine gun. The MG 42 can be dismounted and carried but as soon you change your weapon to either of the other weapons the heavy machine gun will be dropped so it can be holstered or swapped for any of your guns you already have.

The shooting in COD WWII has gone back to basics and although it may have been back in time I really prefer it over the futuristic style of Infinite Warfare!

Now with all that firepower Call Of Duty wouldn’t be much good if it failed in how it shots and i’m pleased to say the shooting still feels fantastic, controls feel sharp and accurate! The actual guns on offer sound really impressive and add to the immersion, from the ping of the clip firing out of the M1 to the satisfying sound of a long distance head shot as you see the poor Nazi’s helmet fly off, everything in the sound effect department for me personally was a great listening experience! One thing I will mention while talking about head shot’s is I noticed something that looked a bit off but only a minor thing, every head shot seems to turn the whole head red literally the whole face is red! while this isn’t going to bother most it was a little lacking in detail and would have been nicer if there was less red instead of leaving them looking like red faced gummy bear!

Quickly onto the sound as it has already been covered already really, I personally found it fantastic, great voice acting and sound effects are really pleasing on the ears as well as some good backing music it’s hard to find anything not to like. Some cheesy lines as already mentioned but all in all I was left very impressed with the level of immersion the sound accuracy provided.

Multiplayer through Xbox Live is done through a main hub, in the hub players will be required to join a division, choosing one from five different ones will offer different rewards, each one has a short video talking about their division and what they offer and you are left to choose the one you wish to fight for.

The different divisions are:

Each one is basically a different class like the Mountain one specialising in Snipers and the Armored specialising in LMG’s. Once the division is chosen you are then able to modify the character, choosing primary and secondary weapons as well as equipment like grenades to throwing knifes. Most items will require unlocking as you progress and rank up through the multiplayer. Like other Call Of Duty games there are five custom slots for the character so you can perfect your style to suit the map you are next playing on.

The customisation doesn’t end with guns, your character can also be modified by selecting different faces, helmets, emblems and even emotes!

Multiplayer has always been one of Call Of Duty’s strong points, the fast and frantic matches are great fun in team death match and domination but I personally really liked the War mode, having to work as a team to hold back enemy forces was an absolute blast! The multiplayer for me has always been great in COD but in recent years it has slowly been falling back slightly but I can honestly say WWII is a step in the right direction, there is no more space weaponry just good old grit and determination with some of the most iconic weapons ever made at your disposal!

Zombies are back again!

Now after years and years of this zombie stuff anyone would think we would be sick of it right? Wrong! Nazi Zombies mode this year feels better than ever! They are genuinely scary this year and on a few occasions scared the **** out of me!

The mode starts with a Prologue which can be skipped but is worth playing to see why these poor Nazi’s turned out the way they did! The Zombie mode adds even more life to the multiplayer that has always been so strong on COD and will keep many players myself included for hours!

Call Of Duty WWII is definitely a massive step in the right direction this year and up there with the best Call Of Duty games from the past, the story mode was fun with fantastic characters and only a few cheesy lines to contend with but the very solid voice acting and facial animations make up for it. The visuals throughout were very impressive, environments were really something to look at with fantastic detail in real world locations! Sounds were absolutely fantastic adding a very large amount of immersion, this all combined gave a very solid and enjoyable experience! Once the story is complete there is still so much left to do, the very solid multiplayer and Nazi Zombies will keep gamers busy for a very long time. Call Of Duty WWII has plenty to offer and I would recommend it to anyone who likes first person shooters or war games as I’m sure they won’t be left disappointed!