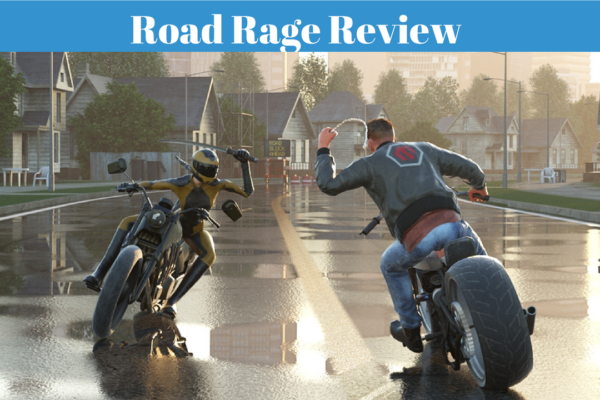 Tested the Xbox One Version

So do we finally have a decent Road Rash alternative now??

Upon seeing Road Rage in the trailers I was genuinely excited about it’s release, an open world biking game with a very similar look to the classic Road Rash!

Sadly I have to say this isn’t the case and i’m not really sure where to even start as everything feels unfinished and a bit of a mess.

Visually the game is actually acceptable, it won’t impress much but on occasions it can look pretty good. There are some ok lighting effects but most objects and buildings lack any real detail at all and then there is the permanent distant fog.

You won’t be leaving your bike at all…

The missions are accessible to the character once they are thrown into the world and then given to him or her through a smashed up mobile phone, this is all voice acted which is nice although some of the acting does leave a lot to be desired. Most of the voice acting is really badly acted and extremely unbelievable, music is also very repetitive and annoying after a while leaving your ears needing a break from it all.

After a fair amount of talking through the mobile phones there will be a set objective to complete, these are all pretty basic and wear thin very fast! Mostly you will find yourself doing check point races or point to point races against some other bikes, the races don’t really hold much of a challenge and so far I hadn’t even been hit back by another biker whereas hitting them sends them flying and leaves you with an easy win and no challenge at all, AI at it’s finest but it gets more comical as you will read below!

Road Rage honestly feels like a bit of a mess, it’s completely littered with glitches and problems! Many glitches I found throughout usually involved some kind of contact with an object in the world, hitting a person at any speed will basically kill them. Hitting people also seems to open a hole in the ground wherever you made contact with them, your bike will lose a wheel through solid ground and get stuck until the game finally resets the bike and you drop back in from thin air!

The game is full of weird little bugs like this and you will permanently find yourself ghosting through objects as you make your way around the open world..

Police may actually be blindfolded?

The Police chases are pretty comical and in all honesty it would have been better to leave the police out completely! After running a few people over I could hear a siren, thinking finally I could have some fun I decided to ride off and try to avoid being caught by the police! Unlucky for me the officer must have been blindfolded and didn’t give chase at all, instead the police car decided to do doughnuts after initially mowing down a few pedestrians! I decided to get closer to see if a chase could be initiated only to have them reverse near me and then go off in the complete wrong direction which ironically left me to chasing them. Once I finally caught them up they seemed to glitch around me and through a few things to their final destination which was head on into a solid concrete post! I was intrigued to see what happens if I actually made any contact with them so I drove extremely slowly into the side of the wheel spinning cop car only to fall off the side of the bike and have it explode while the police car just sat there spinning it’s wheels! The video below shows all of this and is a good indication of the state that this game is in!

Have you ever seen a one handed handbrake wheelie?!

The controls are very basic, triggers control acceleration and braking and then there is a boost button and handbrake button. The handbrake is the only real way to take corners as the actual brake basically stops the bike completely! Wheelies can also be performed and basically from a standstill, they also take no skill at all by just holding back the control stick while accelerating will make the bike wheelie and stay in a set position with it being impossible to go too far back and fall off. One bit of major talent your character will have is the ability to hand brake turn around a corner, one handed all while in a wheelie!!

combat was always a massive part of Road Rash all them years ago and getting the timing right to completely wipe out your opponent always felt good, sadly the same can’t be said for Road Rage, the combat is also a mess and inaccurate to the point of frustrating! It’s not about timing it’s totally about button mashing near another biker and preying that just one of them swipes will make contact and instantly knock them off their bike.

Animations are pretty limited as well with the bikers looking like a plank of wood rather than someone hurtling along at over 100 mph, there is absolutely no sense of speed at all and then there is the crashing which again is a bit of a mess! Hitting almost anything will end up with the character in rag doll mode but hitting a car is something else altogether, it’s like making contact with a bomb! Hitting cars will cause an explosion as well as sometimes throwing the car into the air like a ball leaving you to watch them bounce around while your character disappears through the map completely!

If you can live with all it’s bugs and glitches there is some stuff to unlock!

All of Road Rages problems kill the game completely for me and it was a pretty painful playthrough with all the bugs and problems the game has. The game however does have a few unlockables for hardcore players who can look past all this, progressing through the bland missions will result in new bikes and upgrades being unlocked, these can then be brought for your extremely hard earned in-game cash.

Road Rage could have been so much more! The open world idea would have been great if it had a real story and decent missions to match but sadly the whole experience is a bit of a mess, it’s completely littered with bugs and glitches giving the game a real unfinished feel! Good to see another game with full voice acting but the acting is very hard to take seriously or even listen too. Sadly Road Rash fans are still in for a wait to get a decent alternative because Road Rage certainly isn’t it!