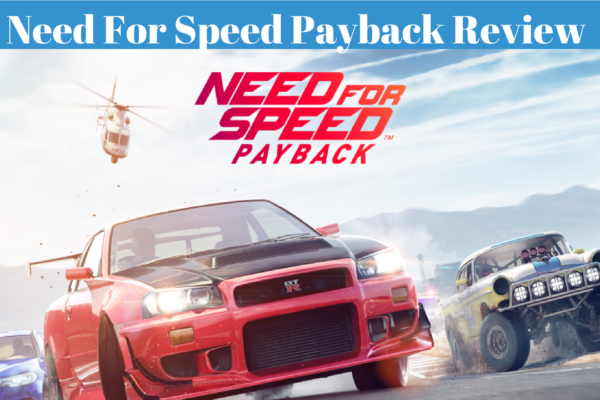 If the Fast and Furious teamed up with the Need For Speed series would this be the outcome..

Need For Speed Payback looks to promise some fast action and over the top stunts but does it deliver..

Starting the story of Need For Speed Payback and things look very promising, using your character Tyler and taking control of one of the fastest Hyper cars on the planet the Koenigsegg Regera really set the tone for things to come.

Don’t get too comfortable in that Regera though because before you know it you will be in something a little slower and probably spend the majority of the game in your next car! I chose the Honda S2000 as my first car, while nothing special I assumed it wouldn’t matter as surely it won’t be long until I’m testing out some of the faster cars in the game. Sadly I was very wrong! Get extremely comfortable in that first car you choose as it will likely be the one you use for a fair few hours!

Hope you are ready for a good old grind…

Using the same car isn’t forced on you by any means, others are available to unlock but to be able to compete and have any chance the recommended level will need to be hit before starting the race. To hit the levels needed your car will need to be upgraded and money will need to be spent wisely on the speed card system rather than wasting it on new cars. The speed card system is basically cards that are brought or won that can then be used to upgrade the parts on the car to increase the level by upgrading certain parts like the engine, brakes and clutch etc. This is where Need For Speed Payback just feels like one massive frustrating grind as these cards become essential to progressing, being at the required level is the only way to win as if you are under it you will probably be left behind.

Races and events around the world all have this recommended level as I said above if you are under this then you will most likely not be winning until you get your level closer or higher, most of the time I found myself under the level that was recommended and this resulted in the grind that I was previously talking about, going back over the same races to improve my level was a frustrating task! Like any racing game you want to experience all the cars and collect them but Need For Speed seems to want to stop you from doing this, upgrading to a new car is basically like starting over again!

So trying to get away from all this boring grinding talk and the game does have some nice cars, most will need unlocking by playing through the story. While that’s ok if the story and characters make the game worthwhile, sadly this isn’t the case, some of the cut scenes and voice acting are beyond cheesy!

The games main three characters are Tyler, Sean and Jess with each one being a specialist in certain race types. Tyler specialises in drag and street racing, Sean in drifting and offroad and Jess being a highly skilled runner. Now I am Sorry I know I said away from the grinding but sadly there’s more here! Certain car types will be needed for certain race types and yep your going to need upgrades to hit the recommended level to stand a chance, back to repeating races and saving for speed cards as winning the race is the only way to progress. The AI is probably also worth a mention here, being under the recommended level will leave you in their rear mirror anyway but be ready for the AI, they pretty much stick to a perfect line and take corners at unreal speeds which is frustrating but if you like a challenge then good luck!

I was a little surprised with the fact the speed cards are so heavily linked to progression and that they aren’t able to be brought with your actual cash! don’t worry though if you do like micro-transactions there is the wonderful shipments available! Surprisingly sometimes these are given for free and contain items like credits and part tokens which all help get them speed cards and car upgrades. If you want a little bit less of a grind and don’t mind giving up even more of your hard earned cash the option is there to skip a little bit of grinding!

prepare for some frustrating chatter

On a plus note the visuals in the cut scenes look good and if you can ignore some of the cringe-worthy chatter throughout, it’s great to have voice acting and decent facial animations but at times it is hard to listen too and take seriously! Now something that I was really let down by and that is the big open world. Visually at times NFS looks great with fantastic lighting effects and a good attention to detail and then go to a town and it looked like a different game, the Buildings and distant objects lacked any kind of real detail, poppy textures can also be seen as well as everything just looking a little fuzzy and dated.

Damage to the cars is also only cosmetic and when I say cosmetic I mean hardly at all, you can hurtle into anything at silly speeds to just come out with a little scratch and this can be rectified if you are actually bothered by just driving through a petrol station that not only repairs that little scratch but also refills your NOS, the main reason to go to these gas stations are because they also unlock a fast travel point. Obviously visually NFS was never going to be on a Forza level but I did expect better from such an established game franchise, real damage, weather effects and stunning visuals would have improved things massively and would have been a major step in the right direction.

The game world itself is open and you are free to explore as you wish, there are many things on the map to do such as events and activities as well as collecting some of the games collectibles to keep you busy. While there is loads to do, for example smashing bill boards and beating speed traps, it’s the game world itself that has it’s own problems, the towns have no life, roads are basically empty, as well as the visual issues mentioned above leaving a very unexciting experience, such a shame because this really could have rejuvenated the Need For Speed series.

Good backing music and full voice acting are a plus

Onto the sound and the game does feature some decent music soundtracks as well as some good but over the top car sound effects which is expected of a Need For Speed title. As mentioned earlier the full voice acting is nice to have if you can look past it’s annoying lines and cheesy script.

The main thing with Need For Speed Payback is that it’s an arcade racer, the controls are one thing that didn’t disappoint with drifting really being one of it’s best features! Speeding through streets on the wrong side of the road while narrowly avoiding the odd car was also thrilling with a decent sense of speed! The cars also react differently to road surfaces, taking a drag car off road will majorly slow it down and hurt it’s handling so choosing the right car for the terrain is essential.

EA were desperate to get the Need For Speed franchise back up there with the best, sadly the way everything is set out it just feels like a really long boring grind before any fun can even be had with some of the games best cars! Having to basically stick with the same car for most of the game because of the upgrades seems like a punishment and really puts a dent in the fun.

Need For Speed Payback could have been a great arcade racer, the handling is there but the whole game is let down by this big grind of a system it has where it feels like a punishment to buy a new car, the fun has been taken from the game just because of this system. Visually it can impress but also at times looks a little dated as well as having a pretty lifeless environment. The open world however has plenty to do and if you don’t mind grinding all the way to the finish line then there could be plenty here for you.