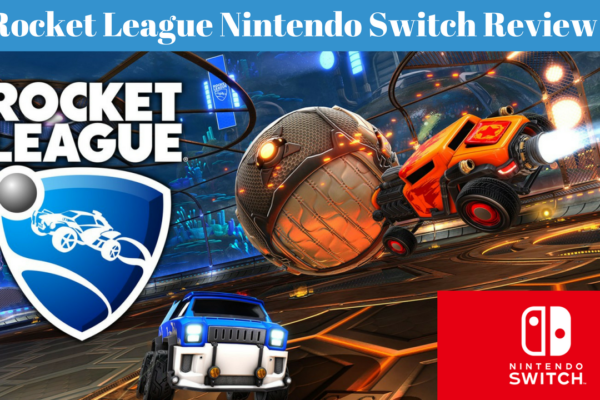 The Nintendo Switch version was tested for this review

Rocket League has been around for a while now but finally it’s making it’s way onto the Nintendo Switch, is it a good port though?

So whoever thought football and cars could go together so well? If you are one of very few people to never experience Rocket League it’s basically a game of football in a giant dome, the difference to a normal game of football is instead of using people you get to use a car!

Starting in Rocket League things can all feel a little mad as you just chase around the ball like a headless chicken, after a few games though everything starts to make sense and even tactics are used to try and score goals or keep goals out of your own net.

After playing on both the Xbox One version and PC it’s clear to see Rocket League on the Switch has been slightly stripped back in it’s visuals, this is pretty noticeable on the TV mode where the picture is really blown up and textures can look a little jagged and fuzzy. Handheld mode however with the Switch’s smaller screen doesn’t seem to suffer as much with the only issue being smaller objects that are further away can be harder to see clearly. With these slightly toned down visuals though the game plays really well and never suffers from frame-rate problems, it seems the Switch’s hardware hasn’t held the console back from yet another great port just by sacrificing visuals a little bit

Although the Switch’s slightly toned down visuals aren’t the worst the Switch version features a few little bonuses that more than make up for it. First there is all the Nintendo exclusive items and cars which are a really nice touch and give the game a good Nintendo feel, then there is the fact this version also features a very Nintendo Switch mode in local splitscreen! Yep that’s right Rocket League is not only gaming on the go for one player but also multiplayer! While this mode can frustrate having such a small screen to play on and using just one Joy-Con to try and score goals and save others with no camera stick to control, it’s still a fantastic mode to have and the developers need a pat on the back for adding it!

Obviously local multiplayer is great but then there is also the online multiplayer which was more than expected, players in this version can also experience cross-play so Switch players will find themselves playing against both Xbox One and PC players so there is basically zero chance of not getting a game!

The online mode is really where the fun is at and where the real challenges begin, there are options to play alone and go up against a team of AI but it really doesn’t compare to going against real people and using real tactics and skill to try and win matches. The AI in the exhibition mode isn’t great but will be ok to sharpen your skills as well as being a good place to start for a bit of practice.

If you are really new to Rocket League and not just rusty there is a training section to fill players in and really get them started:

The matches are fast, frantic and will require real skill and judgement with the added bit of luck to score and win. The cars are quick and have the ability to boost, jump and drift to try and control the ball and maneuver it to the goal. After a bit of practice the controls become really intuitive and you will soon find yourself really in the thick of the action, scoring goals and blocking at will!

The ball while looking like a metal bowling ball reacts more like a beach ball and is seriously unpredictable, players will often go all out to try and hit the ball wherever while sometimes it is better to keep back waiting for the opportune moment to swoop in and nick a goal. There is also a few other modes available and one is the chance to try your skills at basketball! This basically replaces the goals at either end with giant hoops to try and get the ball in!

To score goals for their team, players need to get the ball to cross the line in the goal mouth, this ends up with the ball exploding and blowing every car near it into the air and away from the goal, you are then awarded points and a goal for the team, points are also earn’t through things like making last ditch blocks as well as having shots on goal. Obviously the team with the most goals at the end wins the match.

There is plenty of customisation in Rocket League even the way the ball explodes when a goal is scored can be changed! The Nintendo Switch version has some nice additions like special Mario themed cars and special rocket boosts which have Mario themed stars coming out the back of the car when it’s boosting.

There are plenty of items to unlock anyway but if you do get bored there is also loads of packs available to buy to add even more variety to the game, special DLC packs that include Back To The Future and Batman vs Superman add plenty to keep players wanting more but remember this is at a cost! The DLC comes in packs or selected cars, most packs are only £3 each while some cars are £1.50 each.

The arena’s are a dome shape and the cars have the ability to drive up the walls and even onto the ceiling. There are some little power-ups spread around the floor giving players fuel to their boost meter, while the small glowing disks add small amounts of boost to your meter there are some disks with a floating ball, collecting these completely fill the meter and give the player full boost to smash opponents, doing this hard enough causing the opponent to explode and then have to respawn.

Last thing that’s worth a mention is the sound, the arena’s throughout sound great and the crowd really fill it with atmosphere as they chant and shout with the ball getting hit in a key place or even near the goal. Everything about Rocket League shows an attention to detail and even the sound backs that up.

Rocket League is a game that really shows anything can work! Who thought of putting football and cars together and with the addition of other sports like basketball there is really something for everyone! The Nintendo Switch version is slightly held back in the visual department but doesn’t look bad by any means and the performance is great with no frame rate issues what so ever! The Switch just seems the perfect platform for a game like Rocket League, being able to grab a quick match on the go while maybe travelling to work is something that most would more than appreciate as well as the local and online multiplayer. All in all it’s another great port onto Nintendo’s handheld and we are sure it will be a very popular one!