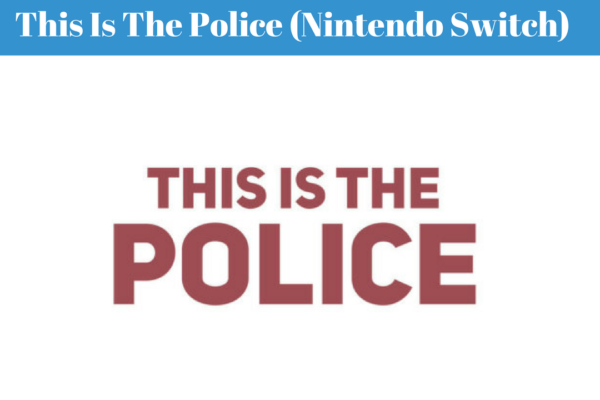 This Is The Police Review

Available now on PS4, Xbox One, Nintendo Switch and PC.

This is the Police is like no game I have ever played before but is it any good? Find out as we take a look…

Taking control of struggling police chief Jack Boyd, you will be tasked with cleaning up the streets! Boyd is retiring though, with only limited days left to clean the streets up and make half a million for his retirement fund, the clock is ticking!

From the start of the game it’s clear the game is far from visually stunning, faces barely have any detail and characters are only really told apart by what they wear and the voice they have. The art style is very minimal and dull in colour but it does the job well enough, items and objects in the game can be seen but everything holds very little detail.

This is the Police has a fair bit of voice acting and for the most part it’s actually pretty good! The majority of it will be from Jack himself talking from his perspective as well as some conversation from and with other characters. The story is well told to the player and gives a good indication of Jack’s struggle through life at both home and work. It’s great that we haven’t got to read through endless amounts of dialogue as I may have expected with this type of game.

Once the initial story is told and you have a rough idea what is going on in the story, Jack will have to do things like sit in a room full of reporters in which you will be given the options on how to handle the questions, naughty or nice cop comes into play here with how you answer and the choice is totally yours.

The main part of the games gameplay is up next and it places you in control of police shifts, the city is drawn out on front of you, when crimes happen you are tasked with sending the best equipped personnel to the crime scene. At first this is easy but as the days go by things get a little harder and sending the right officers is crucial! Crimes differ in how serious they are and it’s down to you to send the correct officer with the correct experience needed, planning ahead is key though because if you do send all your officers out and none are back and available for another crime that’s reported you will be left helpless, having to just watch the timer ticks away!

Choosing the squad before each shift can also be challenging and there are a few factors that can really get in the way, sometimes before the shift officers will try to get the day off and it’s down to you to decide if they should come in or not. Some excuses leave a little bit to be desired and you will need to carefully make the right choice. Each time a crime completes the officer sent to it will either gain or lose points depending on the outcome, getting these right is the way to getting the squad up to a high rank and being successful in the crimes they are sent too.

The game also gives you a good chance to decide what type of cop you are and there is plenty to choose in what you feel is the right thing to do! For example you may be forced to fire all your staff of a certain ethnicity leaving you in a pretty uncomfortable situation, as well as turning a blind eye to certain crimes to earn a little bit more towards jack’s retirement fund. The choices you make are totally down to you!

The choices you make impact the way the game plays out, sacking your staff because of their race will leave you short on officers when tackling the crimes whereas if you don’t go through with it and give in to the demands you will lose public backing and maybe even officers anyway so sometimes it’s a bit of a no win situation anyway.

During some crimes you will be put in the shoes of the officer and given the chance to make choices that will impact the end result of the crime, there is a short video below to show this:

Game play on the Nintendo Switch was a good fit and played out well with no noticeable slow down or lag but this isn’t really surprising with the games fairly basic visuals. This is the Police fits well with the Switch’s pick up and play game-play and is great fun to solve a few crimes on the go while sitting on the bus or train on the way to work but also works just as well playing in TV mode.

This is the Police is a very different experience to anything I have played before, visually it could be better but the art style is still nice, voice acting is great to have and saves reading through endless dialogue! The gameplay is very heavy on strategy and will keep the player thinking on what the best choices are to progress. The story throughout is well told and there is plenty to do to keep players entertained, the games style and gameplay fits perfectly with the Nintendo Switch’s portability. If you fancy playing something a little different and chilled out This is the Police is something that’s well worth checking out!

This is the Police