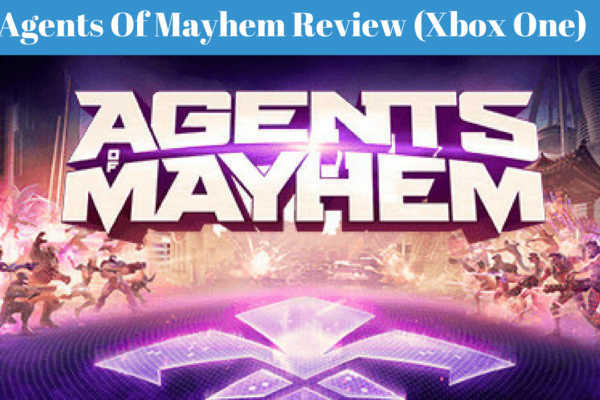 Xbox One version tested on Xbox One X

Is this a Saints Row spin off?

I personally had no idea what to expect from Agents of Mayhem having never really heard much about it before release. Being set in the Saints Row Universe I expected it was well worth a try and would probably feature the same wacky gameplay as Saints Row.

I was surprised straight away with the games visuals, they were really good in the art style that the game has, lighting effects looked great and colours looked vibrant and bright all with plenty of detail everywhere getting things off to a great start!

The game is played as a third person shooter and things start with a character called Hollywood, an up and coming actor Hollywood has a good personality with plenty of one liners and humour. Hollywood is part of the self named group “Franchise Force” which from the start is alongside Hardtack and Fortune.

The squad of three can be changed as you progress through the game unlocking more of it’s characters. There are 12 characters to unlock as well as three others that can be purchased as DLC agents. All of the characters from Agents Of Mayhem are really unique, this adds a good bit of variety in the way you play the game. The extra characters that need unlocking are done by completing the games side missions which I found myself wanting to do as fast as possible to get them all unlocked.

As I said with all the characters being unique and each agent has their own strengths, it’s crucial to pick the right team that suits your style but also having the right characters that will help you through the mission. Characters such as Hardtack are a bit of a tank, slower when moving but deals more damage with his heavy weapons whereas Fortune is more agile and harder to hit while dealing slightly less damage. I found myself constantly swapping my line up around in the squad just to try out all the different characters. I used Hollywood the most, mainly because he was the character with the most upgrades done but he also had a few funny lines throughout the game as well as being pretty likeable.

The upgrade system is done by levelling up the character by completing missions, you will then be able to unlock new abilities as well as some extra costumes for each character. As you progress through the game you will also pick up core upgrades, these upgrades permanently upgrade your character of choice and improve things like Hollywood’s mayhem ability giving him unlimited ammo and a faster fire rate for the duration of the ability.

Characters can be changed at anytime while playing just by pressing left or right on the D-pad, this gives the character you put away a chance to regenerate health.

Being able to change characters so easily you would expect the speaking to be set people talking but it’s actually whichever character is currently on screen, all with their own responses to the conversation that is happening! This I found pretty impressive considering how many playable characters are actually in the game!

The voice acting while being a great addition to any game is a little dull in places and can find itself trying way to hard to be funny! There are a few bits of dialogue that may get some players laughing to themselves but in all honesty it tries a little too hard to be funny and will leave you wanting to laugh out of pity.

Visually Agents Of Mayhem was a pleasant surprise!

As I mentioned earlier the games visuals surprised me a little, the vibrant and colourful environments were something I really didn’t expect, the level of detail and effort gone into the games cities and characters is clear to see and is something that the developers have done a great job with. The art style isn’t trying to be realistic but it is really pleasing on the eye, the only performance problem I did come across was when driving a vehicle, I noticed the game did chug along a little bit during certain parts of the map while driving but apart from that the performance was fine and smooth throughout.

Most of the time you will find yourself exploring the city through the set mission you are on, the missions can prove a bit of a challenge and there is literally a difficulty level for everyone, sixteen different levels yes that’s SIXTEEN! While it’s nice to have more options you can’t help but think that’s a little too far, the game is challenging though and switching characters to regenerate health is essential. Health is a difficult thing to keep an eye on though as on many occasions I found my character dying out of nowhere as I didn’t even realise the health was low, there is no warnings or anything the character will just go to the floor and you will have to switch to the next one!

Use Agency cars as soon as you can!

Making your way around the city can be done in two ways, on foot or in your car. To start with you will need to use the really bad civilian cars that are scattered around the city until you eventually get the chance to use some of the Agency cars, these are faster and handle much better but the driving in general isn’t great. There is a decent selection of cars on offer on the streets but the Agency cars you have to unlock are the ones you would want to drive!

The other way to move around the city is on foot, your character will be able to perform a triple jump to reach higher ground as well as sprint by holding in the left control stick. Movement on foot was actually better than driving when using the civilian vehicles as they do feel pretty poor to drive.

The combat on the other hand I did find fun to start with but it does get a little repetitive after a while, the game also doesn’t really let you make mistakes with your squad selection as some bosses will require you to have a certain character with a certain ability to be able to defeat them easier and it will tell you what you need to equip, taking a boss down with a shield will require a character like Fortune who has the shieldbuster specialisation skill, she will bring down the shield faster and make the battle easier.

The main story and unlocking all the other characters through the side missions will keep players busy for a while so there is plenty to do but it’s all just a little too repetitive, drive somewhere (Or Run) activate something, fight some bad guys and go back and do it all again, many players will get bored fast after doing this a few times and this is what really kills Agents Of Mayhem, the grind to unlock the extra characters can be a little addictive but once you have unlocked them there isn’t much else to focus on.

Agents of Mayhem isn’t a bad game and will shock people with it’s visuals but it is let down by some repetitive gameplay. The story was enjoyable and the characters were all pretty unique, along with some ok driving and plenty of things that need unlocking that will keep players busy for a while. The visuals shocked me a little bit and looked bright, colourful and full of detail on the Xbox One X. All in all there is plenty to be had in Agents of mayhem and if you don’t mind a bit of repetitiveness then Agents of Mayhem is well worth checking out!