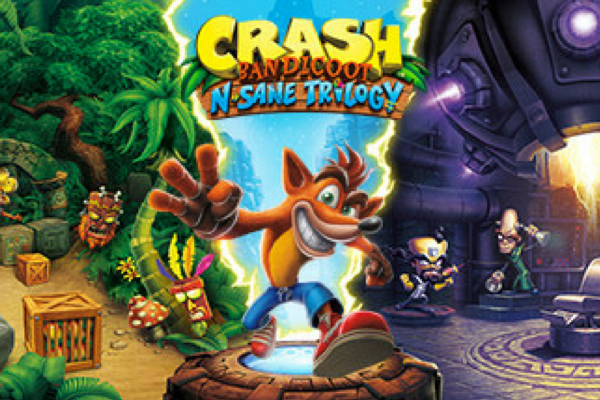 Available now on Xbox One, PS4, Nintendo Switch and PC

Strange to finally see it but Crash has made his way onto Xbox One and it was worth the wait!

Some things in life you just don’t think will ever happen, Sonic on a Nintendo was strange enough but now one of Sony’s all time favorite characters has gone multi-platform on to all of Sony’s rival consoles and even PC. The N-sane trilogy has been available since June 2017 on the PlayStation 4 but is now available on just about every platform available!

So finally Xbox fans get the chance to relive one of the classics from the past but this time with a fresh lick of paint and some improvements. The N-Sane trilogy includes the first three games of the series, Crash Bandicoot, Crash Bandicoot 2: Cortex strikes and Crash Bandicoot Warped. The three games have all been fully remastered but are otherwise exactly the same as the originals. The Developer Vicarious Visions has honestly done a fantastic job remastering all three games with a real attention to detail that is clear to see, the characters and environments are now full with detail, lighting and look more realistic.

Finally looking past the visuals and this is where the game brings back memories, not always good ones mainly frustration! Most of the time it’s a one hit death and everything is pretty much set out to get you but the game is addictive enough to keep you coming back even when you just think you have had enough, constantly saying “oh i’ll try one more time”. One great thing about Crash is that it’s just one of them games you can pick up do a few levels and then come off, the auto save works perfect and you always know what your doing when you come back because it’s all simple and intuitive, I can only imagine the series fits the Nintendo Switch absolutely perfectly!

This isn’t going to put off any fans from the past because I think we are all well aware of the difficulty and that’s one of the games main appealing points. Levels are all still set out where one wrong jump can mean game over if your running low on lives so perfecting jumps and landings is key while also dodging some of the games enemies can also make the jumps even harder! While talking about enemies and AI it’s pretty clear to see how basic this all is with most taking a set route and not really reacting to crash in any way or form apart from the hogs on the bridge that come at you to put you off your landing on one single piece of wood that will collapse if you stay on too long, one of the first games extremely frustrating levels!!!

While the difficulty will have some struggling some will absolutely love the challenge! There really is no set pattern to it either sometimes you will absolutely fly through a level to just be completely stopped in your tracks with a massive spike in how hard the level is to clear! Each level also has boxes that need to be broken, every box will need to be found and broken while not dying once to completely clear the level and get a perfect score, trust me though this really isn’t easy as some boxes are placed to catch you out. There is also a type of speed running option to try to complete as well, once you clear a level the ability to replay it and hit the stop watch will be there allowing you to run through it as fast as possible for the your best time score.

The N-Sane trilogy is just a massive nostalgia trip, running from boulders while dodging holes in the ground or riding a hog dodging just about everything that is trying to get in your way just brings back so many memories for me and it’s fantastic to be able to go through all this  again with all the improvements. The trilogy does show it’s age with it’s basic gameplay and some of the AI on offer but this is what it’s all about reliving the past and Crash just makes me want to do it all over again!

Crash Bandicoot N-Sane trilogy is a complete blast from the past and I loved reliving it all with the three games all being beautifully remastered. The  game is by no means perfect with just improved visual and does show its age but this isn’t one of them games you remember was so good, get to play it again and think why did I even like this game?! Crash has stood the test of time well! The bargain price of the trilogy makes it an absolute steal for what you get and if your anything like me it will constantly keep you coming back for more trying to get a perfect level clearance or clearing levels in the fastest time possible! A more than welcome addition to my Xbox Library of games!