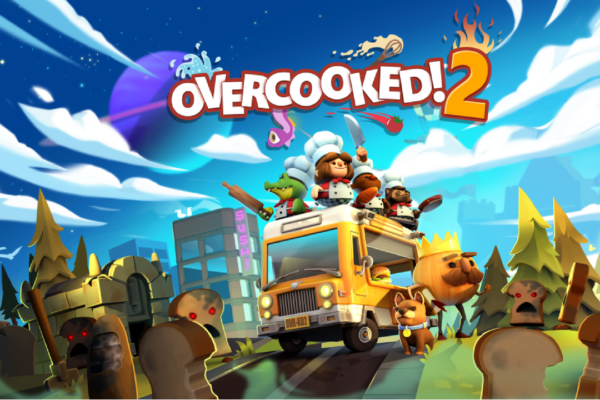 Available now on Xbox One, PS4, Nintendo Switch and PC.

Xbox One version tested on Xbox One X for the purpose of this review.

After somehow never playing the first game we got our hands on the latest installment into the series and from what we have played it’s really good fun!

Starting up Overcooked 2 I really wasn’t sure what to expect, the cartoon style visuals and the games childish plot (the scary unbread) all had me a little concerned this was going to be one for the kids and something I personally wouldn’t be interested in playing! The good thing is I was so so wrong! After starting the game up, doing some of the tutorials and getting some idea of what I was doing the game started to get addictive. I decided to bring the kids in to get involved as the game features up to four player multiplayer all on one screen. This is where the game goes into it’s own, solo is ok but can be a little slow and frustrating. Having up to four people next to you and all screaming out the orders like Gordon Ramsey is really where the fun is! Obviously with the kids you kind of have to tone it down and be a bit more Jamie Oliver!

While I say the game is great to play with the kids the difficulty does spike up pretty rapidly, at first things are not that bad and you have time to think and organise but after the first few levels things really ramp up, leaving you and you co-op buddies to be totally in sync and working extremely well together! Before you even finish the first in-game world you will be taking on some of the games harder levels!

The game features many different food combinations to be made including things like rice and sushi but it’s not as simple as just getting the sushi and putting it on a plate the whole dish will need to be prepared and this will include taking the food to a chopping board, chopping it up and then putting it on a plate. The first few are very basic dishes but as you progress you will have to mix together certain ingredients before the dish can be taken and served. The difficulty as I said doesn’t hold back at all but it’s honestly a good thing and keeps the player on their toes! Rice will need to be cooked in a pot, but leaving it on the hob to long will cause it to burn and eventually a fire will break out requiring a player to grab the fire extinguisher and put it out! Then there is the dirty plate system, this is where things do get tough! The plates after they get served will come back dirty and a player will need to collect them from where they come back, take them to the sink and clean each one! This can be really time consuming and something that will need real management to actually progress through the game as the plate can be a little slow coming back and obviously no plates means no food being served!

Overcooked 2 doesn’t always take play in a nice well equipped kitchen either! Sometimes levels are on things like on a hot air balloon or rafts floating down a river, the ingredients you might need maybe on the other raft requiring players to actually throw the ingredients to each other to get the orders completed!

The level progression is done by completing the orders correctly that come in the top left corner, the more you do right the more tips you get and at the end it’s all added together for the final score and to give the player a star rating out of three. The way the levels are set out is addictive and I constantly found myself going back to a level to get three stars instead of leaving it with one or two. The main game world allows your character to travel round in a bus and select the level you want to try and tackle.

Visuals were ok for the artstyle no major detail but it’s all pretty enough, performance on the Xbox One X was great no lag or slowdown which I did expect to be honest. The controls were also very accurate and the ability to have up to four people playing on one console is brilliant and makes the game a perfect sofa game with friends! The online mode is also good but really isn’t in the same league as playing on the same TV and working together.

Overcooked 2 is a game that I personally am so glad to finally try! The game is just pure fun but at the same time forces groups of up to four players to work together like a Formula One pit stop team to get the orders out quickly enough and progress through some of the tougher levels! Nice visuals and good sound make the whole experience one that should definitely be shared with both family and friends!