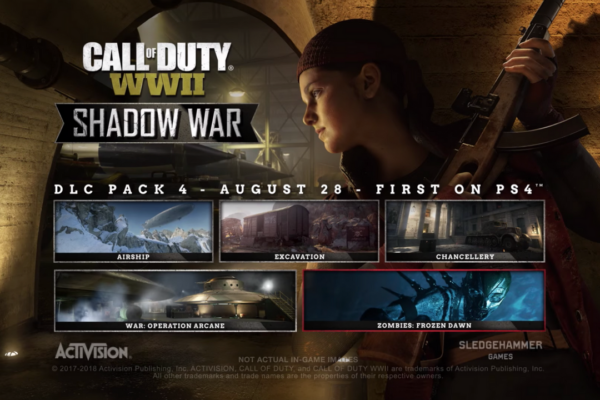 The Shadow War DLC is coming out as a timed exclusive for PS4 first, before releasing on other platforms.

The Shadow War DLC will conclude the WWII Nazi zombie story-line with a final chapter titled The Frozen Dawn. In the hellish depths of a lost city players will be tested against new hordes.With these new enemies there will also be new weaponry, with what looks like magic-infused weapons you to pull off powerful attacks against the hordes aiding your survival. The trailer does showcase a few but Sledgehammer has said there will be plenty of secrets to discover in the latest DLC.

The Shadow War DLC will also be adding three multiplayer maps: Airship, Chancellery, and Excavation. Airship is far up a mountain with a docked zeppelin on it. If you manage to control the zeppelin your team will gain the advantage, Capturing it can be tricky though and will will have to break from cover and balance through narrow cliffs to reach it! Chancellery is set in a French stronghold for some nighttime firefighting, the use of the buildings in either end of the courtyard allow decent sniping positions for any sniper fans! The last map is Excavation and is set in an Algerian mine.

The final piece of the content is Operation Arcane, Playing as the Allied Forces you will be tasked with infiltrating an Australian lab to steal top secret tech. The labs hanger will be filled with UFO’s in which you will need to destroy the lab on your escape. Operation Arcane will allow you to discover many new weapons such as the Tesla gun in which you can steal and aid your mission completion.

Call Of Duty WWII Shadow War DLC will release August 28th on PS4, this is a timed exclusive and will release for both PC and Xbox One at a later date. COD WWII season pass owners will also for a short time be able to invite other players that don’t have the DLC so they can experience it, this will run from August 28th to October 28th.