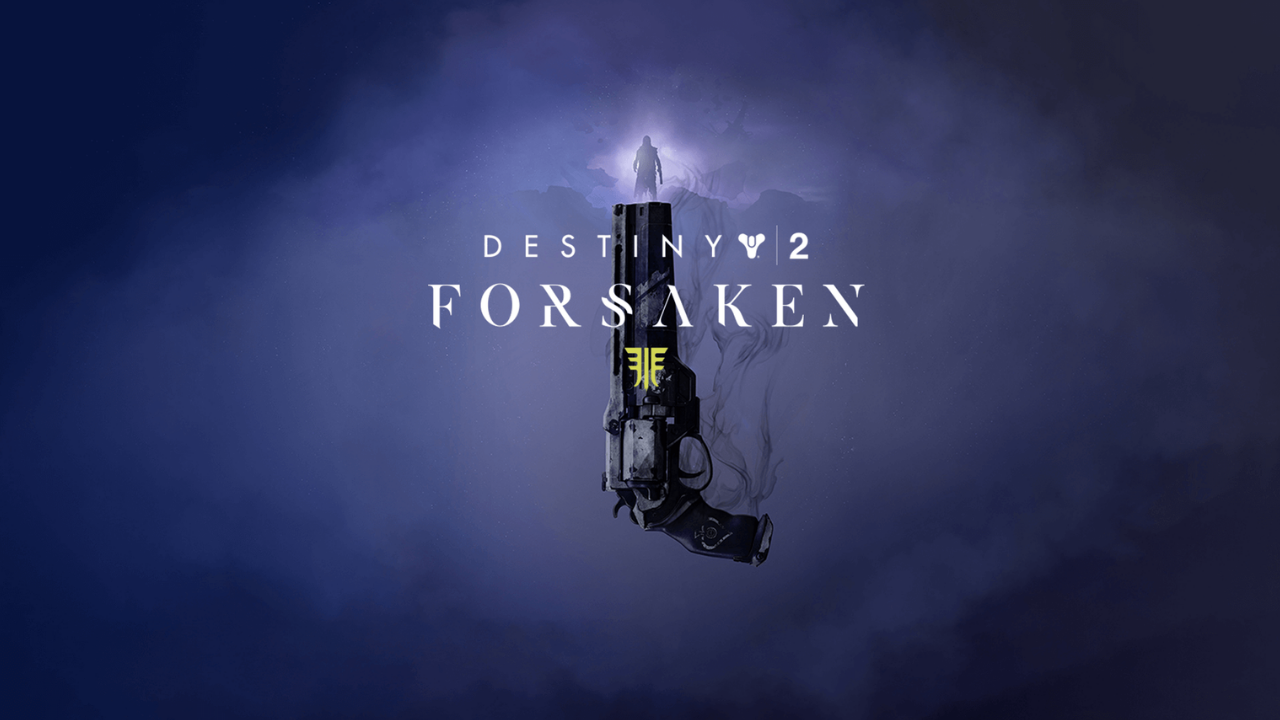 Don’t forget to check out our original Destiny 2 review on PC.

Being so early into the life of Destiny 2: Forsaken this review won’t be a final review and may well change over the next few weeks as we work our way through all the added content.

After a few cut scenes basically partnering your guardian up with Cayde-6 you will find yourself fighting your way through a massive prison full of enemies on the loose, the action through this bit can be manic at times, giving the player a real sense of your guardians god like abilities!

I started the Forsaken expansion around level 240 and I’m just over 500 now, the max power level for your guardian is now at 600 but getting there after 500 takes time as items rarely go much over 500. The main gains for me wasn’t all just through the main campaign there was a fair few crucible matches as well as trying out the games new Gambit mode which I will talk about later in the review. New players to Destiny do actually have the option to skip some of the story and level up to thirty straight away, while the option being there is nice for anyone wanting to jump straight into the Forsaken DLC I strongly advise against it. Playing through the base game as well as Osiris and Warmind will give you all the information and probably the time to grow to love one of the games best characters Cayde-6.

Travelling to the Tangled Shore your guardian’s main motivation will be to avenge his sidekick Cayde-6’s death, coming away from saving the universe in previous times your now speaking guardian will be tracking down and taking out the boss-like enemies that helped in eventually bringing down Cayde-6. Uldren Sov is the main culprit but bringing down his eight barons will be the first thing needed in avenging one of the games favourite characters! The Barons are all interesting and unique in what they bring to the game with their own strengths, some have access to impressive arsenal of weapons where as characters like the Trickster will use bombs disguised as ammo to try and take out your guardian. As well as the Barons there are new enemies called the Scorn, they seem faster than previous enemies and wield torch like weapons that they swing from chains, if they do manage to hit you with it the flames can cause your guardian to catch fire and take damage while in the flames! The other new enemies are also pretty dangerous and move extremely fast, they look like a spider and creatures explode when they get close enough! Much like the cursed thralls they can cause somewhat of a chain reaction if they come at you in a group, with your guardian backed into a corner this is absolutely deadly! There are a few other types of Scorn that you will ecounter along the way and they are a welcome addition to Destiny 2, it’s very easy to get in over your head and get completely swamped by them if you don’t approach the situation properly!

Obviously with the addition of new enemies most will hope for some new weaponry and I’m glad to say there is, you really don’t have to wait long into the expansion to get it! Destiny 2 now has Crossbows!! Not only are they extremely accurate the arrows explode on impact as well causing even more damage, crucible players will probably know all about the Crossbow as it may be slow to fire but the damage is impressive! Players can fire the arrows quicker by hitting the trigger but if you hold and aim the damage is significantly increased as well as being more accurate in hitting your target. There has also been the addition of new supers to be unlocked, using a huge hammer spinning round with it and slamming enemies into the ground never gets old! The ability to also Thor like hammer throw is also a nice addition with the ability to also pick the hammer back up if your fast enough to it.

Since the drop of Forsaken there has been a change to the way weapons are infused, players will need masterwork cores to be able to actually infuse and rank up your favourite weapons or gear. In my opinion best way to level up now is probably to use the highest power level weapons you have, rare or legendary until you hit around the 500 mark and then start infusing otherwise it seems a bit of a waste as the masterwork cores aren’t that easy to come by! There is a way to buy them later on in the Forsaken DLC through an ally called Spider but they are expensive and go up in price as you buy them with the first one of the day costing ten legendary shards, the second costing twenty and then finally the third or anymore that day costing forty shards per core! This does reset everyday so it’s probably worth stocking up on shards and using them daily just buying two masterwork cores a day rather than paying forty shards per core! There is still the option to break down masterwork weapons or gear to acquire the cores but getting masterwork stuff can be quite rare anyway so buying them is going to be the fastest and in truth anyone without the Forsaken DLC might feel a little forced to buy it so they can visit Spider to buy the cores.

Masterwork cores and Legendary Shards aren’t the only requirement to up the power level of items either, scattered around each world there will be planetary materials to collect such as Alkane Dust, Dusklight Shards Seraphite to name a few. These are scattered around the worlds and not that hard to get hold of but now hold a much higher purpose in Destiny 2 as some weapons will need as many as twenty five to be able to infuse. These can also be obtained by opening chests hidden around the planet as well as some public events that reward them so obtaining them isn’t as problematic as the Masterwork Cores but they now hold more value than before.

A new addition to the menu is the ability to view your collection of items, this is a great way for players to finally be able to see what they are missing to complete the whole games collection of items with currently 1443 in total, this is spread across everything including weapons, armour, ghost shells, exotics, vehicles and flair.

With the addition of Forsaken there has also been new strikes added which is always a positive as the same ones over and over can get repetitive although we still grind through them for the best gear! The latest strike is set in The Prison Of Elders and can be quite challenging, the levels main boss is a highly powerful Servitor that used to be used by an old character called Variks. The strike is a breath of fresh air when it comes to strikes and one that is really enjoyable and frustrating at the same time, especially if you start mistiming the fast train section! The strikes accessed through the main map also allow players to select the power level for the strike, choosing a higher power level will increase the difficulty but in turn dish out better loot at the end!

Before we talk about Gambit mode in multiplayer I just wanted to mention how beautiful the game looks and also runs! The amount of detail Bungie crams into these worlds is so impressive, sometimes it goes a little unnoticed with all the action on screen but if you actually stop for a minute and look you can appreciate the amount of care and attention Bungie put into this game! The other thing well worth a mention is the sound, cut-scenes are brilliantly voice acted, sound effects pack a real punch and it also has some of the best background music in any game I have ever played. Bungie have done a fantastic job with the visuals and sound on Destiny and now with all this content they constantly pushing the game forward, the grind the endgame has isn’t for some but I personally love it and love collecting all the games latest weapons and armour that’s being added all the time.

Gambit mode is the final thing we will look at for the minute until the raid launches September 14th. Gambit mode was added to the multiplayer offerings with Forsaken and it’s a bit of a mash up between PvE and PvP. Two teams both with four players working to take down the levels enemies which consist of different types such as the Cabal, Fallen, Hive and Vex. Killing these will give off motes of light, then you will need to deposit these motes to acquire blockers to the other team that will be trying to do the same thing to you. Depending on the amount of motes deposited it is actually possible to send your own team member into the other teams world to disrupt their progress. After hitting 75 motes you can call your main boss and taking this boss down before the other team takes theirs will result in victory for your team. This is where the timing of sending guardians from your team is crucial because if your guardian goes across and takes out other guardians from the opposition team it actually refills some of the main bosses health on their side resulting in slowing them down in taking out the main boss and could even win your team the game.

Destiny 2: Forsaken is what the series needed! Great story that actually gets you wanting to avenge Cayde! There is a real sense of darkness to your guardian with the revenge which makes a change! New enemies which can overrun and cause a real challenge in some areas is really nice to see. Weapons, armour and other items can now be tracked through the games new collection list. Gambit mode is a welcome addition and something different to the crucible if PvP isn’t really your thing. Visuals and sounds are some of the best around at the moment with gunplay really packing a punch. New weapon system may be confusing and frustrating at first but once you get the hang of it everything works fine! The amount of endgame content is going to keep players interested for ages and we can’t honestly wait for more to be added to what was already a pretty large game! Anyone new to Destiny 2 should definitely invest in the complete edition and play through all the DLC as it’s well worth it!