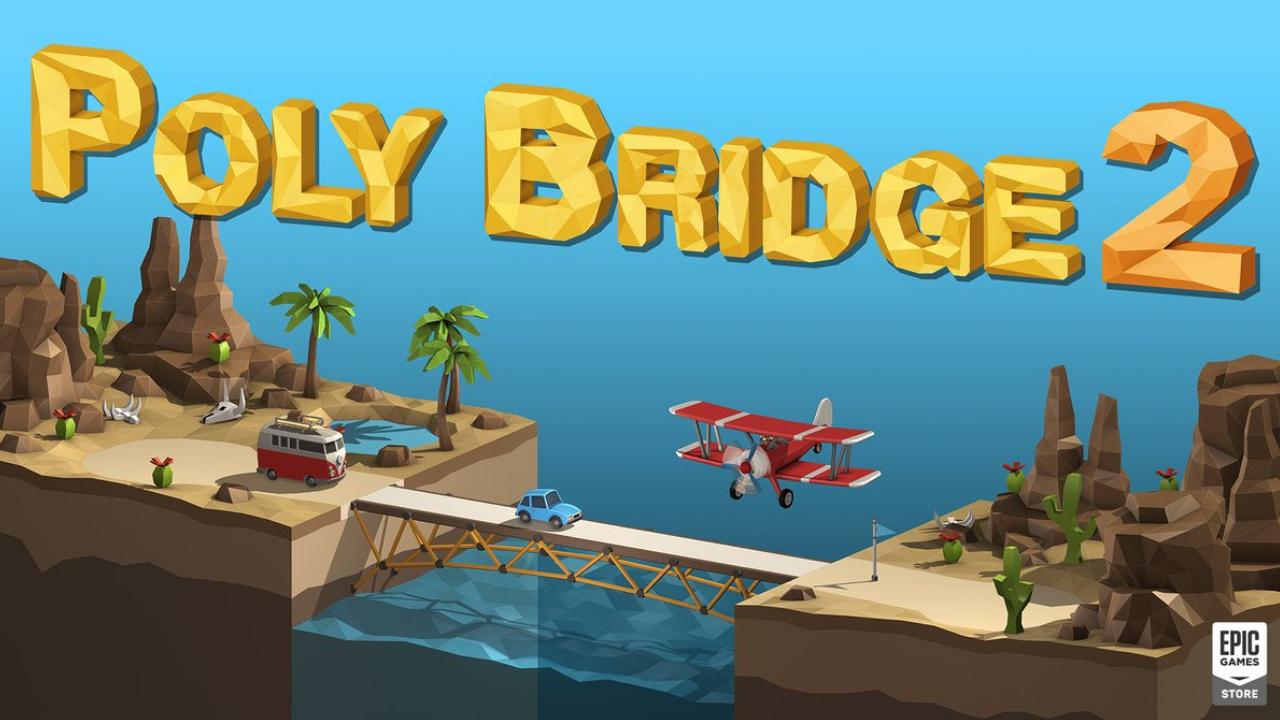 Poly Bridge 2 looked interesting but different to anything I would normally play. Having seen Poly Bridge played on mobile devices with touch controls it was a concern if Poly Bridge 2 would be any good on PC.

The first thing I noticed straight away was Poly Bridge 2’s difficulty setting, it is really hard even from the start! The game really makes you think the whole time and while the tutorial is helpful the only way to really learn is trial and error.

The tutorial introduces players to different materials and gives a general helping hand in getting started but once you get to the tougher sections of the game the difficulty really ramps up and tests your brain to work out how to actually keep the bridge supported and strong enough to carry the weight of the user.

The challenge is mainly when finances are low as each bridge will have an allocated amount of money to use on the bridge so it isn’t just the case of using the best materials all over and as much as you want, the cost has to be factored in and makes a huge difference when it comes to difficulty.

The good news is after a piece is placed there is an option to move it or adjust it to the correct position, this can also be done after the bridge is tested and failed. If the bridge does fail and it most likely will first time around there will be a little hint back on the building screen to show which part of the bridge actually failed first giving you a starting point to get the bridge up to scratch.

Although some materials can’t be used on certain levels there are different materials to choose from when building the bridge, using wood sometimes will not be strong enough so the steel will be required but then there is the cost difference so all things need to be considered before just upgrading to stronger materials.

These decisions are the easier ones and it isn’t long before you will be facing drawbridges and ramps that can pose a real headache! Building a general bridge can be tough enough but drawbridges require a little more work, getting the pivot point right, then the hydraulics in the right place while being sure everything is supported can be a bit of a puzzle! All these factors alone are enough and then you will need to keep the cost down to pass the level with a decent score.

The scores do matter and there is a bit of competition as such with leaderboards showing how much people managed to spend when building the bridge, the great thing here is the fact you can compare what you did with what others did and maybe see a different way to do things.

There are four different worlds to choose from all with their own set of levels and although the levels are set out in order, you can tackle them however you choose. Jumping straight into some of the harder levels probably isn’t the best idea so practising on some easier ones and getting a bit of knowledge will prove an advantage when you do decide to tackle the harder challenges ahead.

Sound and music are a little non-existent but in all honesty aside from background music and a few side effects, this is hardly anything different to what we expected.

Graphically the game looks smooth, bright and polished. It isn’t the most detailed game when it comes to visuals but they are more than up to the job. Performance-wise the game ran perfectly on both PC and a less powerful laptop. The main part of Poly Bridge 2 is the physics and by far are the games biggest strength!

The physics make the game worth playing and while sometimes you will be left frustrated it is mainly down to a mistake from you in not supporting something on the bridge properly. Watching bridges fold because you put to much tension on a spring or forgetting to place a piece of road on a small section are just a couple of things that can go wrong but the game doesn’t punish you and within seconds you are back to the builder to correct the mistake.

The pickup and play side to Poly Bridge 2 is something that keeps me coming back even to just do the odd level, the fact it isn’t going to need a mega pc to run it means that most laptops will be ok and it is just one of them games you can pick up and put down when you have five minutes.

The controls with keyboard and mouse are pretty solid and intuitive, there are some shortcuts to learn but it is all explained as you go along so when it comes to controls it’s easy enough with the mouse and keyboard fitting the game perfectly allowing accurate placement and control.

Last but not least is just a quick mention of the modes and my personal favourite was the sandbox mode. In sandbox mode players are able to make some of the most outrageous bridges you can imagine with no restrictions on pieces used or cost so it really lets you be as creative as you like which also adds a fair bit when it comes to replay value. The number of levels the game has will keep most people playing for a while anyway but sandbox just gives that bit more to keep you coming back even if you manage to complete everything.

Poly Bridge 2 is just a fun but challenging physics-driven building game. The game looks ok visually and the controls work fine with keyboard and mouse. Plenty of levels to work through and lots of different materials and ways to try to keep costs down but the bridge sturdy. Few different modes including sandbox mode which adds much replayability to the game, the ability to build with no restrictions is great fun! The main mode and the leaderboard is a great way to check out other gamers builds and maybe get some tips on how to improve yourself. Poly Bridge 2 is one of them games that is great to pick up and play for five minutes here and there or if you have the time play for hours on end. While not everyone will appreciate building a bridge the challenging levels were fun and maybe worth a try if you like the look of it.