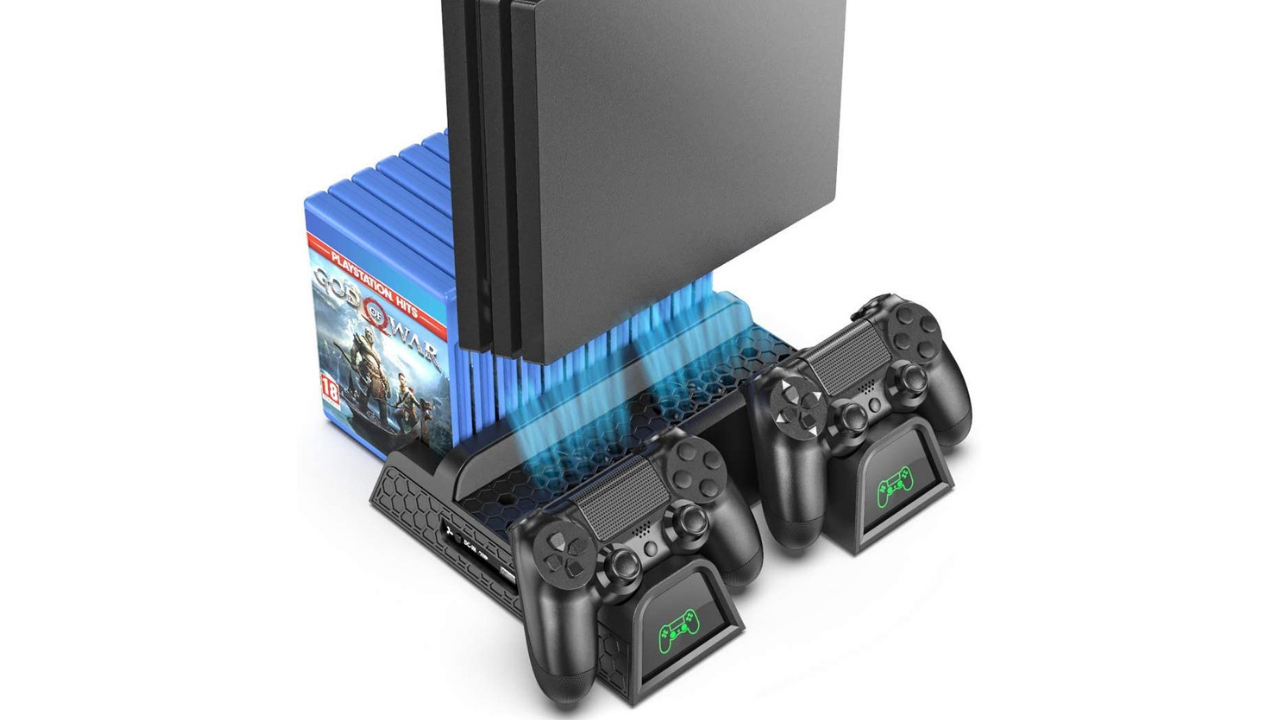 After reviewing a few Oivo products already I am starting to really higher my standards. Each product I have had has been well made and very functional, the Nintendo Switch grip we reviewed last month was possibly one of the best available to date so I was eager to try to get hold of more accessories from the company and this time it was a little more on the high end of their items with the PS4 cooling stand.

After receiving the stand very quickly from Amazon It was obvious the usual love and care that I have come to expect from Oivo went into the product, the packaging is clear and well presented with images and information that look very clean and professional.

Once out of the box you will notice straight away the stand is of very high quality with solid materials used throughout, there is no cheap flimsy plastic and the whole unit is very solid being more than up to the job of keeping your PS4 upright at all times. The whole unit looks very clean in design and the Oivo branding looks very professional on the side.

The stand is very stable and this is even for the PS4 Pro which is slightly smaller than the stand which then uses an adapter to fit it in making the stand useable for all three different models of console. I wasn’t able to test the other two models because I no longer have either one but the PS4 Pro fits perfectly in the gap and is very snug with no chance of the console falling out or tipping over, this is the first real test for the stand as it’s the most important and it passes with flying colours in terms of stability.

The next thing I want to talk about is features and for a stand, it does have everything you can really want or need. The game storage on the side is great and the ability to stage games down the side looks very cool showing off your collection, obviously, digital game owners won’t really be that bothered but it is there if you want to use it and will take twelve games in total.

Under where the console sits is the final feature and that’s the fans. While I thought this would make no difference to the jet of a console it actually did! One thing that has always been an issue for me and the PS4 Pro is the noise from the console’s fans, they can get so loud it’s honestly a joke Sony allowed the console to come out like this, mines been like it from new which has always driven me mad when playing. The fans from the Oivo cooling unit have actually helped which was a real surprise, I noticed straight away the fans on the PS4 aren’t ramping up to full speed half as much as they used to which is fantastic and for me makes the cooler worth it just for this feature let alone the rest!

The fans are controller from a button on the back of the unit and can be turned off or on with a simple click. There is also a USB cable that comes out from the back that you will need to plug into the PS4 to power the fans and controller charging, don’t worry about losing your USB port on the back of the PS4 though as the cooling stand has another one built it. It is possible to gain another USB port to charge from if you power the Oivo unit with a plug from the wall, obviously, there will be no data connection to the PS4 but is a great way to charge a phone or something from if you wanted to.

The Oivo cooling stand did exactly what I expected and the company keeps churning out great quality products with plenty of features at a very reasonable price! The stand is made out of very good materials as well as having more features than you would expect from just a cooling stand. The controller charging works really well as well as the game storage on the side making it a very all in one solution which is great for anyone wanting to really tidy things up. The fans did a better than expected job of trying to cool the extremely loud PS4 Pro with the console not spinning the fans up at full speed half as much! The USB port added to the back of the Ovio stand is just another thoughtful addition making sure users don’t lose a USB port plugging the Oivo stand into a USB port on the PS4 for charging controllers and powering the fans while in use. I am very impressed with the Oivo stand and would certainly recommend it to anyone wanting a very stable stand with plenty of features, great cooling and great build quality! Well done Oivo make sure you get working on the next-gen stuff right away!

Unit was provided free of charge for my honest unbiased review.