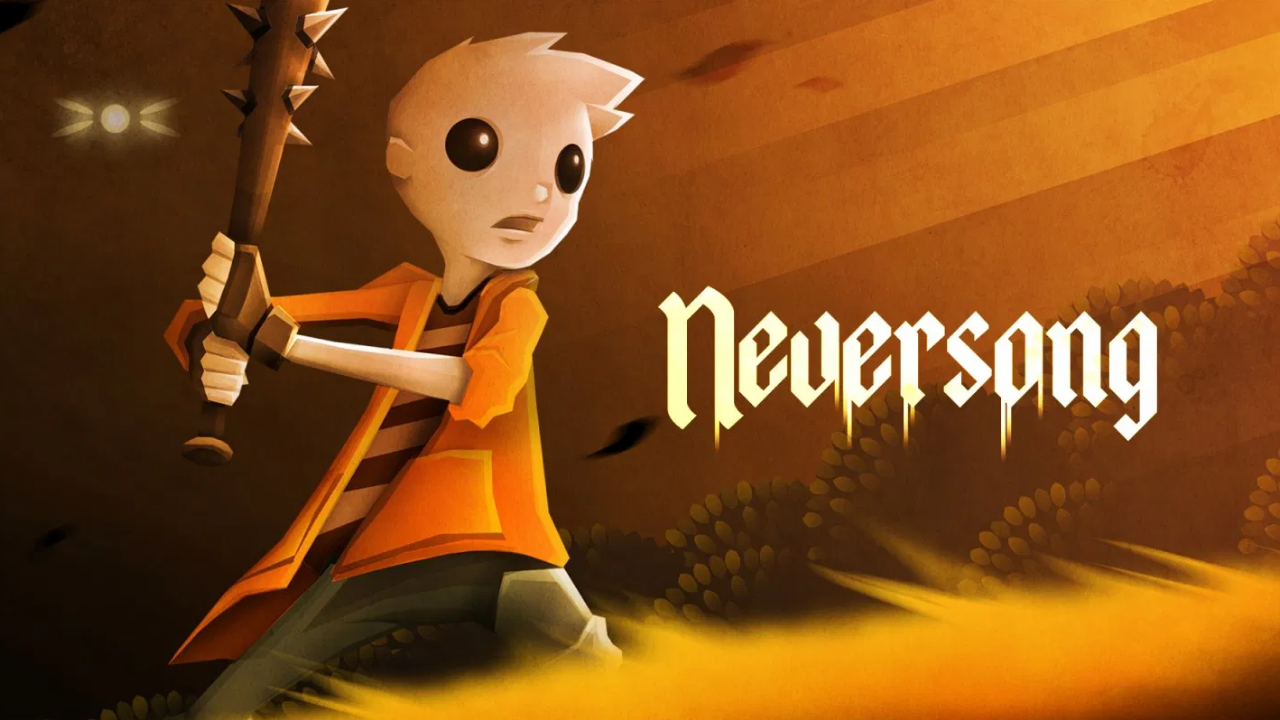 Available on Xbox One, PS4, Nintendo Switch and PC

I didn’t really know what to expect when I saw Neversong but the art style looked great and the story sounded intriguing so I gave it a go even though it is a very different game to most others I would normally play through!

I think most people in life have experienced some degree of guilt and Neversongs story is very much along them lines. Exploring through Neversongs guilt driven story your character Peet will be constantly reminded of the guilt he should be feeling after his girlfriend Wren was abducted by a monster and instead of saving her he ended up fainting and going into a coma. The adults went out of the village to look for Wren leaving just a load of kids To fend for themselves. I won’t go any deeper than that into the story to evade spoilers for anyone wanting to playthough the games impressively written story.

Peet Starts the game in Wrens very quiet and eerie house with nothing, no weapons or anything the only things you can do is move, jump and interact with certain things throughout the village. There are plenty of characters around all with different things to say and stories to tell. While this could come across as boring it isn’t long before you have your first weapon and other tools to progress through Neversong’s story.

Alongside acquiring weapons and other items it isn’t long before Peet gets a companion in the name of Bird, the companion has a very sarcastic vibe to it and I personally felt it was very similar to a companion to a classic years ago called Tatl for The Legend Of Zelda Majora’s Mask. Bird will throw hints and comment the odd sarcastic remark, but will also sometimes carry items for you to use while also grabbing hearts to restore HP.

Peets HP is shown at the top left of the screen with white hearts, these can be increased as you go along by collected one hundred stars that Peet will collect from fallen enemies. It isn’t far into the story until Peet has five or six hearts which aids the difficulty and makes it a little easier when taking on some of the games harder bosses. Saving points are pretty well spread out on the game and Peet will need to find a fireplace to perform a save.

The combat in Neversong is very basic and with only one real weapon to swing around but Neversong does a great job at making this fun and not too repetitive, most enemies will take around two to three hits to kill but bosses will make you think a little more to defeat them as there will be a set way to actually do any damage to them. The controls are responsive and feel perfect for this platformer, swinging that bat round never gets old and the improvements along the way help to keep things feeling fresh.

At the end of each boss fight Peet will acquire a new song, going to the piano in Wrens house and playing the song will unlock a new item which in turn basically unlocks the next part of the games story, certain items will be needed to reach certain places, its a great formula to keep you thinking at all times. I did find myself a little lost on a couple of occasions as the game doesn’t really direct you in anyway but a bit of exploring usually will get you back on track, some players will like this lack of handholding but some might be left frustrated.

Visually I loved the art style of Neversong, it is very much cartoony but the level of detail that’s gone into making this game is really impressive, you can clearly see the developers have put a lot of effort into making this title. Sound throughout was really strong and enjoyable, the backing music was perfect and the voice acting for most of the characters was really good and believable.

The story needs a special mention as it’s really clever and well thought out. Alongside a solid story, there is a solid element of humour and sarcasm throughout, characters are really well played and very likeable. The plot just seems to suck you in and it certainly isn’t a game you will want to leave for too long, getting to the end just seems the right thing to do! The final boss is a bit of a challenge but the ending is really good and well worth the whole playthrough.

Wonderful visuals, story and sound make Neversong a great expierence for anyone wanting a decent story driven game to playthrough. Neversong is very different with it’s guilt driven story but it does a great job of dragging the player in and making them want to carry on playing all the way to the very end. There is some real elements of a few classic games running through the veins of Neversong and it really was a job to play from start to finish.