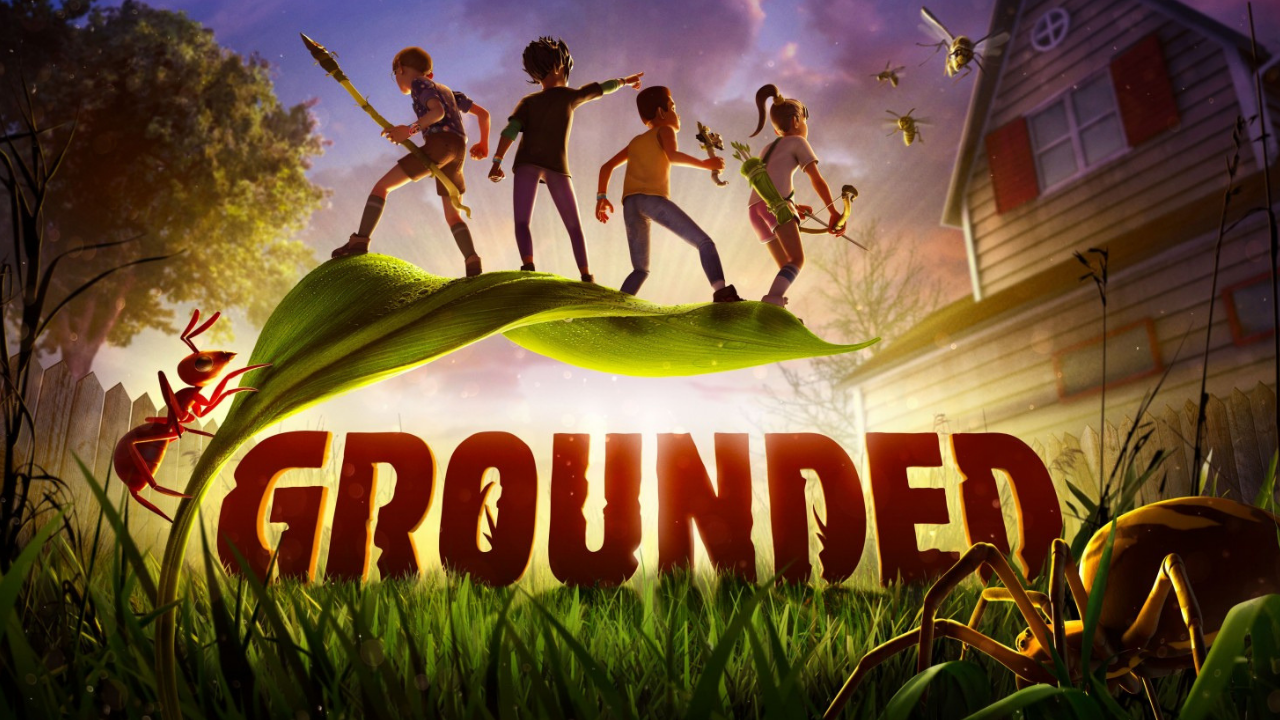 Available on Xbox One and Windows PC

When Grounded was originally shown off you could be forgiven for thinking it was a Honey I Shrunk The Kids game, this is by no means a bad thing with the original film all them years ago turning out to be so popular. Grounded looks to offer a fair bit when compared to the other survival games out there and going in a totally different direction by giving the gamer the perspective of a tiny person, the garden has never looked so scary!

I just want to mention the game is still in early access and there are bugs and crashes but anyone who is used to playing beta versions I’m sure will be ok with this, while I have encountered a fair few issues none are game-breaking and will surely be patched out in the near future!

Upon starting Grounded you are greeted with a nice clean and clear UI, the PC has a few different graphical options but you are not leave overwhelmed. I was actually really impressed with the visuals in Grounded, the back garden looks fantastic, lighting effects are really impressive and seeing the sun beaming through the blades of grass really adds to the immersion and the feeling that you really are that small!

The detail throughout is really great and the aspect is just right when looking around, walking up to a baseball and seeing the sheer size of it makes you realise just how small you really are in the game and this is where for the player things get difficult. The main enemies encountered while exploring the garden are spiders and trust me if you don’t like spiders you are going to be left petrified by these things as they are brutal! I have actually jumped out of my skin on a few occasions, running away you may think you are safe to turn around but then made to jump out of your skin as the bloody thing jumps at your face and kills you in one hit! (unless you have some decent armour)

There are other types of enemies around and you will need to eventually tackle them to get the precious resources needed to craft some of the higher quality gear but the spiders, in my opinion, are absolutely terrifying! If you see their eyes go red your in trouble so start running!

While Grounded does have a story to it I found it near impossible not to get caught up in the building and crafting mechanics. Every time you are out exploring different items you pick up will unlock different things that can be crafted or built, this can then be further unlocked if you go to an analyzing station and analyze the item further.

The crafting and building are really impressive, I would say it’s fairly similar to The Forrest but it’s intuitive and easy to get your head around after you use it a few times which is great in a survival game, this was both on the Xbox One and PC which is impressive as I think that consoles do tend to struggle with the UI side of things in survival games but Grounded has done a great job on both platforms and it’s very easy to get stuck into.

This is also the case when it comes to building, collecting the basic materials is relatively easy and then it’s just a case of putting down a sketch of what you want to build and then just adding the materials to the structure or equipment your building until you have everything you need and then it’s built, the building and crafting in Grounded are really well implemented and great to use.

Building a base is always a good first move in a survival game and Grounded is no different, getting protection from spiders and other insects make surviving that little bit easier but don’t be fooled into thinking Grounded is easy by its playful art style, with the correct difficulty settings there is more than enough of a challenge here for anyone! Keeping track of your character’s hunger and thirst will keep you more than busy as letting these drop will affect both stamina and health, trust me you need as much stamina as you can get when legging it from the spiders!

Food and water is scattered around but eventually, you will want to be a little more comfortable instead of having to make trips out in the dark as your character runs low on water and food and this is where crafting comes into Grounded again. Mushrooms are scattered throughout the garden and are a great source of easy food but making a mushroom farm right next to your base makes surviving that little bit easier this also goes for water and making a dew collector, both these bits of equipment, however, will require resources that aren’t majorly easy to get at the start so venturing out to just survive will be difficult enough to start with.

Once you start to find your feet however and get a base built with a few basic essentials like a water and food supply you can then start to tackle Grounded’s story and try to find out why you are now the size of an ant and basically spider food every day!

The difficuly level is just right and starting out is a massive challange, spiders can kill in just one shot and even taking down things like ladybirds are more than a challange but if you want the good gear it has to be done!

Nighttime is the worst time to be out in the wilderness but this can be skipped by building a shelter to sleep in, sleeping is only allowed at certain times but it does make things a little easier as travelling around during the night is basically suicide with some of the insects crawling around out there!

As I mentioned already Grounded is still in beta and there are a few issues while playing that I encountered, random crashes on PC happened on a few occasions but this wasn’t a major issue as the game has a decent auto-save function which will stop you losing to much progress if it does happen. The only other major bug I found was with the AI and pathfinding which I am sure the devs will improve in the future. The enemy AI is pretty poor and enemies will glitch through objects, pathfinding was the main issue as on a few occasions I had enemies get completely stuck and once I was even able to take down a spider just by hitting with an axe and trust me this isn’t something that would be possible if it hadn’t got stuck as taking them down with real weapons is hard enough.

Aside from these two issues and a couple of really minor things like my inventory showing the wrong amount in a stack of items everything else was really good, this is impressive for an early access game as like I said we all expect a fair few problems but Grounded is a solid experience even in this build of the game.

Controls and sound are the last things I want to mention. The controls were actually really sharp and accurate, combat can be a little sketchy sometimes and you will find yourself swinging like a mad man trying to hit smaller enemies but for the most part, the combat is solid and more than up to the job! The sound in the game is also very good, with a decent set of headphones you will be able to work out where enemies are coming from and after a while even what is actually stalking you! There is some voice acting in the game and once you meet a robot he will give you quests and different dialogue answers for you to choose from, the voice acting was good and more than up to the job and much better than reading everything.

Multiplayer is another great feature grounded has and fits the game perfectly, being able to build and explore the dangers of the garden with friends make everything a little less terrifying but single player is also a fantastic experience if you just want to go and do your own thing.

This review isn’t a final review and I do plan to keep playing and updating the review as future builds and patches are released ao please do check back to see how the game improves.

Grounded was an interesting concept from the first time I saw it, I am really pleased to say I haven’t been left disappointed so far and can’t honestly wait to see what the devs add in the future. The map will be expanding and new areas added as I have already come across a taped off area saying under construction which is great news. Players will need to remember Grounded isn’t perfect and there will be issues but this is the case with early access games, luckily here though we already have a very solid experience and foundation for the developers to improve and add to! The crafting and building systems are very intuitive and the UI is clean and clear on both console and PC. Visually the game looks great and does a great job of giving the player an immersive view of what it would be like to be an ant-sized person. Enemies are brutal and nighttime exploring is something you should avoid at all costs as it’s just suicide with some of the insects wandering around in the dark!

Any fans of the survival genre will certainly find something to like here and in my opinion it can only get better, well done Microsoft for adding the game to gamepass, being able to play this from launch free with gamepass is a great move!