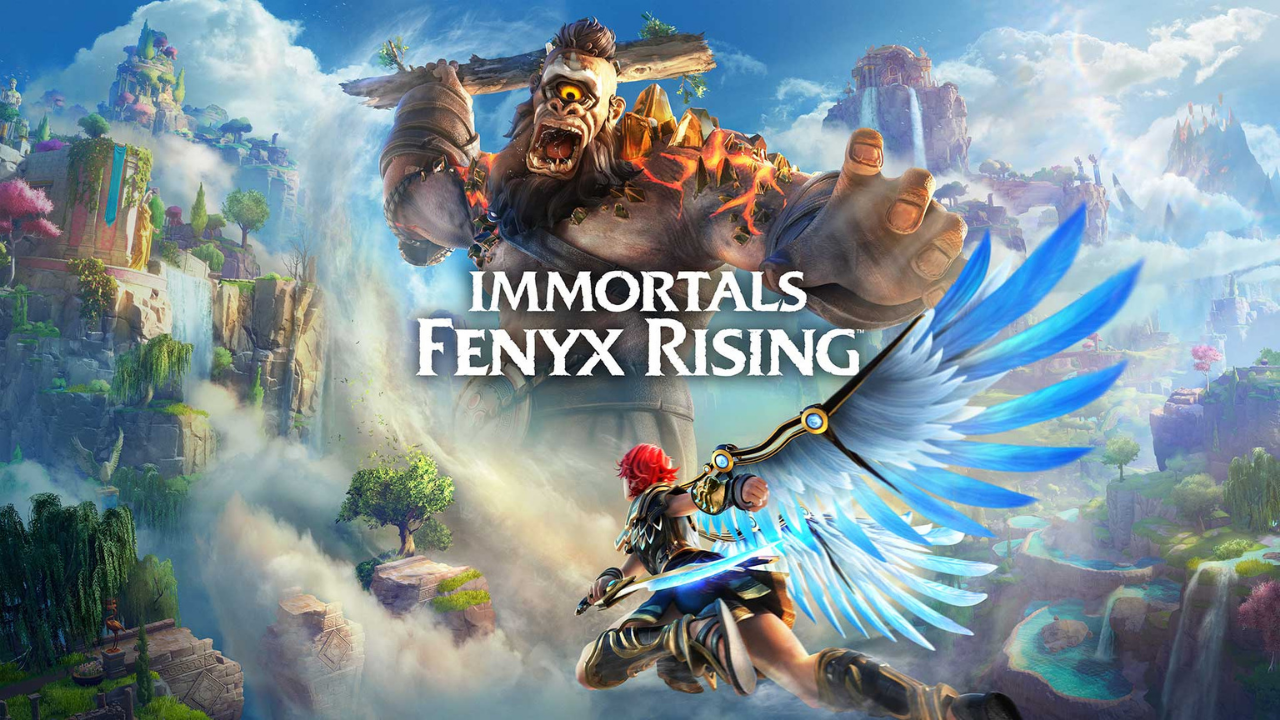 Looking at the trailers for Immortals Fenyx Rising you would be forgiven for thinking it is a bit of a Breath Of The Wild spin-off, similar stamina systems, as well as a familar art-style, are all things that contribute to this and when you consider how good Zelda was and even still is today Immortals can’t really go wrong adopting some of the elements from BOTW as well as a solid base from the Assassins Creed series.

The story isn’t anything like BOTW in Immortals with the game from Ubisoft focusing on Greek Mythology. Taking control of the games main character Fenyx you are left shipwrecked on a weird and magical island. The story is told by two characters that anyone into Greek Myths will recognise, both Zeus and Prometheus tell the story of your mortal character Fenyx and how she progresses throughout the story. The storytelling is lighthearted and the two gods will constantly rattle off jokes to each other with the banter between the pair a real highlight while listening to the story.

Aside from Fenyx acquiring new skills, powers and weaponry the story is about a one time prisoner called Typhon who has managed to turn all mortals to stone including her own brother. Typhon was previously imprisoned by Zeus but is once again free and now hell-bent on destroying all the Gods for good. Obviously with you now helping the Gods Typhon isn’t your biggest fan! The main foe has already reached some of the other gods in the game such as Ares and Athena and turned them into quite the opposite of Gods and this also showcases the games lighter humour again with the God Alektryon now taking the form of a rooster!

When it comes to gameplay aside from the BOTW elements there is also a few bits taken from the Assassins Creed series, climbing to high points to scout out the area around you is the obvious one and when you listen to the devs on how this game was created you can see why it has an Assassins Creed feel to it but it’s great to have a whole new game with them just picking out the bits they want to keep.

The stamina bar plays a large part in where and when you can get to different places and parts of the map, much like BOTW you will need to stop somewhere flat while climbing for a break to regain stamina before trying to make it to the top of wherever you are trying to get. The special blue mushrooms are a good way to regain stamina on the go if you need a quick boost. Completing tasks I will mention later will also increase stamina which will allow Fenyx to climb, run and swim longer.

If the stamina bar does run out while climbing Fenyx will drop from wherever she is climbing, losing HP depending on the height of the fall. When Fenyx is swimming and the stamina runs out she will go underwater and the game will reset you to the last position you was at, this will also lose some HP so keeping this topped up is always a good idea if you are trying hard to reach somewhere that is going to be tight considering the stamina bar.

The landscapes look fantastic and performance on the Series X was smooth throughout. The visuals which share a BOTW design look great with colourful and detailed designs throughout. The colours in Immortals gameworld look fantastic with a real pop everywhere you look, playing on a decent HDR tv is a real bonus and makes you really appreciate how stunning the colours look! The map is vast and holds many different things to find such as treasures and secrets for Fenyx to uncover.

Recovering Ambrosia will increase the health meter while tackling the games different vaults will unlock more of Zeus’s lightning which will improve your characters stamina, armour and weapons. Fenyx will acquire different tools to aid the adventure with one early on being the wings that allow a double jump but as you work through the game travelling is made much faster and easier with all the different mounts that become available. Using a horse or even a unicorn, yes they exist her will cut travel time considerably! If you really want to speed up travel you will need to find fast travel points which unlock and allow you to just select where you want to be.

When it comes to combat the system is very fast, accurate, fun and fluid! Using the bumper and trigger on the right-hand side of the Xbox controller you will be able to perform either a light or heavy attack which felt similar to the recently reviewed Godfall. Locking onto an enemy is also possible and the camera did a pretty good job of being where I wanted it. Aside from attacking there is also dodging and parrying to help Fenyx survive and the controls all feel very intuitive and fun to use. The speed increase compared to something like AC felt fresh and fun to use every time.

Onto the games Vaults, yep they look like something cut straight from BOTW and this really isn’t a bad thing is it! Working your way through and completing vaults is a great way to get the good stuff at the end of it often rewarding the player with Zeus’s lightning, armour or weapons. Sometimes it will just be one bit of loot but sometimes if you are lucky enough it can be two or even all three! The different challenges in these vaults showcase some of the games best mechanics and the puzzles are all great fun to play through.

This seems to be something we always leave till last in reviews at the moment and it’s the sound. Immortals Fenyx Rising sounds fantastic, the voice acting is great and the writing and banter between the two Gods are actually funny to listen to!

So the Series X has a Zelda BOTW alternative for fans of the Nintendo exclusive! If you weren’t lucky enough to play BOTW because you were on Xbox or Playstation then Immortals really isn’t bad! Immortals Fenyx Rising has an amazing world for players to explore while finding secrets, uncovering chests and also playing through the game’s enjoyable story. The Zelda similarities are there but Immortals has some of its own strengths that set it apart from anything else out there at the moment! Vaults are great fun and improving Fenyx to gain new abilities and tools keeps things feeling fresh for a good amount of time. The combat is fast, fluid and punchy, visuals and performance are fantastic and the sound is well-acted and a joy to listen to especially when it comes to the humour and storytelling! For a new title, Ubisoft has done a great job and I can happily recommend Immortals to any RPG fan.