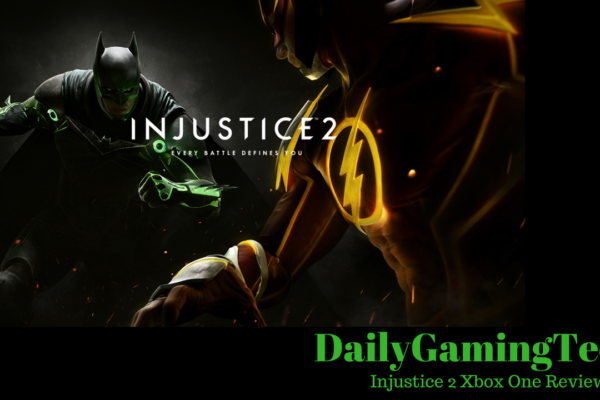 If you are a DC Comic fan Injustice 2 may just be perfect!

Released in May 2017 Injustice 2 has proven itself to be one of the best fighting games ever released, the game is constantly adding more content including the recent announcement of the character Raiden, the Thunder God from the Mortal Kombat Franchise.

Injustice 2 picks up where the original Injustice: Gods among us left off, putting you as Batman against a Superman who is determined to kill criminals before they have actually even committed the crime! We won’t go into that much detail about what actually happens in the story mode giving out any spoilers but basically Superman isn’t exactly popular after what happened in the first game and you will get the chance to give him a good beating!

Cutscenes are blended straight into the fights and make it all a really seamless experience.

The graphics are cinematic and look amazing, playing on a standard Xbox One not Xbox One S without the HDR enabled looked fantastic and at times with the great storyline could be mistaken for a movie!

One thing that stands out a mile is the brilliant facial animations! These are some of the best I personally have ever seen in a game and combined with the awesome voice acting throughout, it’s a real pleasure to watch.

Injustice 2 content on offer is huge and provides great value!

Injustice 2 also features a large character roster with 28 characters on release, additional DLC Darkseid making it 29, there will also be more characters coming through DLC taking the total to 38 providing a huge selection to choose from and master!

Just choosing a character isn’t the end either, each one can be customised and gear can be changed to suit your preference as well as level the character up.

One thing players will see will be loot boxes being awarded and these can contain various items such as character abilities, armour and gear to name a few. Loot boxes come in different levels from bronze to gold etc, the items contained inside will differ depending on the rarity of the box itself. Junk gear that the player doesn’t want or need can be sold for credits which then can be used to buy more loot boxes in the hope of getting items that are actually wanted..

Items from the boxes are great for customising the character to suit your personal preference as well as adding attributes such as strength etc, you can also change equipment colours to suit what you want your character to look like, these can be brought with source crystals.

New to the fighting genre? Playing the tutorial is a must

Onto the actual fighting, this can be tricky for newbies and playing through the tutorial is something you should not skip. The tutorial will give you a basic idea of what buttons do what then up to actually getting you to perform some of the characters special attacks and the art of blocking which is a must.

There can be a bit of button mashing as with any fighting game but learning the combo’s and timing blocks right here is essential as if not you can expect it to finish without getting a hit on your opponent. Juggling your opponent is something that needs to be mastered as it gives you a great advantage as they wont even be able to get a block in for your next flurry of attacks.

The meter on the screen fills up during the fights and can be used to modify attacks and when full activate the characters special attack.

Characters all have a special attack (Batman’s shown above) and once the meter fills in the bottom left of the screen players can activate it and see a small cinematic and deal great deals of damage to their opponent.

Mastering all the combos as well as trying to get a character that suits your own preference and style can be a difficult task but with some practice (and a good memory for them button combinations) The combo’s themselves are not that bad to master and most are fairly simple it’s just stringing a few together to keep your enemy from countering back at you that’s the problem.

Anyone wanting to master the fighting can access the practice arena and master some of the combos on offer for each character.

That brings me on to the difficulty! Playing on normal was a good challenge and for anyone new to the fighting genre stick it on easy for the first play through as controllers may get broken otherwise with the pure frustration of getting a beat down by your opponent. The difficulty is by no means bad but will certainly challenge the player and serious practice will be needed to master moves and attacks.

Injustice 2 also features online multiplayer which means players can fight each other from around the world in one on one brawls in a variety of modes, one-on-one ranked or unranked matches plus other modes such as King of the hill and hot seat giving the game even more value to it! My experience online was actually pretty good with no lag at all although I didn’t manage to win!

The other mode available on Injustice 2 is the Multiverse mode, this mode allows players to join in challenges, some weekly, daily and even hourly so there is always something to do and keep the player coming back!

Lastly onto the sound, along with the game looking fantastic the developers got it right with the sound as well, music is powerful and relevant as well as the bone crunching contact as you smash your opponent and as mentioned early great voice acting all make the sound in the game a very solid package!

Injustice 2 is a very solid sequel, outstanding graphics, sound and story make it a very hard game to beat in the fighting genre! So much content and many modes on offer will have players constantly coming back for more. DLC characters are still being added and keep the game from getting stale as well as the Multiverse mode always adding something a little different.

Possibly the best fighting game ever made and if you are a DC fan you will not be left feeling disappointed!