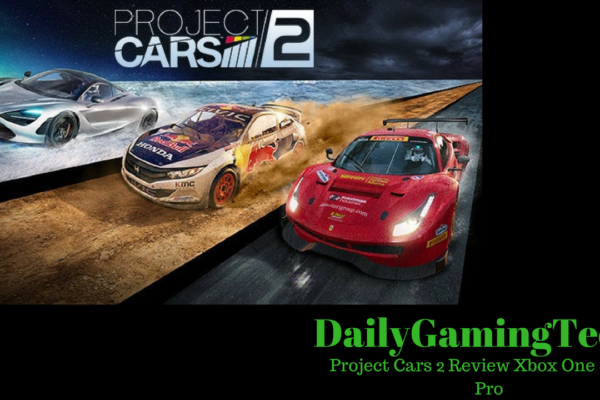 Project Cars 2 is available on Xbox One, PS4 and PC from September 22nd

Project Cars 2 has been around for about a week now and being classed as a real racing sim, is this true? Yes it definitely is!

The realism of Project Cars 2 is some of the best around, any mistake will most likely lead to punishment to the player by way of a crash or spin off the track! The slightest of touches onto the loose dirt just off the track will make the rear of the car feel like it’s on ice and require skill to bring the car back under control before being pulled off the side of the track.

The difficulty level is by no means a bad thing and real sim racers will really appreciate it! The satisfaction of mastering a track layout and setting the fastest lap times left me with a real sense of achievement.

Do yourself a favour if you want to really expierence Project Cars 2 at it’s best get a steering wheel!

The steering wheel for Project Cars is a must for a real simulation experience and in all honesty a controller doesn’t even come close.

The ability to feel the road surface through the wheel and when you are starting to lose grip just can’t be had with a controller. The controller is improved over the previous title but to really experience Project Cars 2 get a wheel setup!

The force feedback was a little bit off when first loading up, I found it would constantly jerk side to side at times and needed so tweaking in the setup to prevent this and set to my own preference.

Weather effects on Project Cars 2 really are something and add so much to the difficulty element!

Weather plays a massive part in the difficulty with it’s dynamic weather system, rain can form anywhere on the track and will constantly change depending on the track itself causing absolute havoc on the racetrack!

I really cannot stress how good the weather is and what a difference it makes just from the spray from the other cars that makes visibility a nightmare or the handling that completely goes pear shaped if you aquaplane over a big puddle making you just a passenger!

If you decide to run a quick race there are plenty of options here as well giving you the option to select the weather you want and when it will affect the race, you could start with a dry sunny day and go into pouring rain or a blizzard half way through the race or even start in the day and finish into the night the options are endless and really mix up the race, adding to what is already a huge challenge.

No Forza when it comes to cars but still very impressive!

The amount of cars on the game is also fairly impressive with over 180  fully licensed cars to choose from, while not getting near the amount of rival games (Forza 7’s ridiculous 700+) there is more than enough of a selection there to keep players entertained.  The car selection really has something for everyone, from the top of the range LaFerarri to the Ford Sierra Cosworth or Capri there really will always be something that you will want to try!

All the cars also feel different and unique which is really important as choosing the right car for the job is crucial to winning, with the weather playing such a crucial part in the races car selection is probably one of the most important things you will do.

New to this years Project Cars is some of the modes and this one features Rallycross and IndyCar which make it a far more appealing game to a larger audience. Rallycross is turning into a bit of a favourite for me and as like everything else in Project cars 2 a huge challenge to even complete a lap without coming off the track! Power-sliding around the track in the snow feels great and takes plenty of skill to keep the car under control and round the bend without running out of talent and facing the wrong way!

The handling of the cars is much improved over the previous title, everything feels much heavier and real and less like you are floating over the track, it now feels more planted to it with a good sense of feeling on grip levels and road surface.

You can make things slightly easier with a few small tweaks.

The only thing you can do to help with the difficulty of driving is add some driving aids like having the ABS on full and the same with the stability control as having these off will most likely leave you doing dougnuts a few times during some of the races.

The race engineer mode is a great feature and brilliant for anyone lacking in car knowledge (We are not all F1 mechanics) This option gives the player the ability to use the engineer to tune the car, you go out on track and see what you think the car is doing wrong, then use this feature to tell the engineer and he will adjust the car for you without you getting completely lost changing stuff you have no idea about!

Is there much difference between Xbox One and PS4 Pro version?

We tested the Xbox One version and PS4 Pro and the difference was pretty clear, Xbox one is well down on power compared to the PS4 Pro and graphically and performance wise this can be seen. The PS4 Pro runs smooth at 4k with no noticeable lag and beautiful visuals where as the Xbox One was struggling at times with lag in places and the occasional pop up of textures in the distance. The game is confirmed for Xbox One X enhancement and after seeing what it’s like on the PS4 Pro we cannot wait to see what the Scorpio does to it!

The Xbox One version is not bad by any means and anyone wanting a great driving game shouldn’t worry as the lag isn’t extremely noticeable and not all the time but when you have 15 cars on the screen all bunched up into the first corner things do tend to chug along a bit.

While talking about other cars on screen the AI needs to be brought up, things have improved from last years kamikaze pilots and drivers do seem to have a little more awareness of what is actually going on around them. The AI is still far from perfect though and you will during the race see other drivers just smack straight into each other at the smallest of bends in the road when there is clearly enough room for the pair to go through, on a few occasions I even had something Sebastian Vettel would have been proud of with a car coming alongside me and just driving straight into me but this is rare and for the most part the AI is much improved, challenging even the best of sim racers!

Ok now onto the career and modes. The career mode is the best way to experience a bit of everything starting from the bottom and working your way up to some of the fastest and most exotic cars on the planet!

The career mode is the same as the rest of Project Cars 2 and that’s extremely hard! starting the career you will be asked to fill in your details and then choose the career path you want to take, only four paths are opened and another two are locked away until you progress up into them. You can go from the very bottom and start with karting or choose to go straight into Formula A racing the choice is yours!

The progression through the career can be extremely challenging and you will need to finish inside the top three to actually progress and this can be near impossible with the difficulty up for the other drivers. It seems a little harsh to finish all the races in a championship to find you finished fourth and have to do it all again but that’s the type of challenge Project Cars set out from the start!

Multiplayer is there too but needs more players

Multiplayer races are the way to go if you don’t fancy racing against the sometimes hit and miss AI but the lobbies can sometimes be lacking in other players and you maybe in for a wait to actually get started. This may pick up once the game has been around for a while but the few times I tried I was left waiting.

Sounds are improved over the previous title

Lastly onto the sound, cars sound improved over the last title with plenty of different engine sounds and the title still retains the dramatic background music in the menus. The brakes squealing when they lock up can sound a little off and generic in my opinion but if you improve your driving enough it’s a sound you shouldn’t be hearing!

Project Cars 2 is by no means a perfect racer, dodgy AI and small amounts of lag at times hold it back slightly from being a perfect game but when you look past it’s minor flaws you have to sit back and appreciate what Slightly Mad Studios have done! They have created a great sim racer that will test and push the player to their limits! Plenty of modes, cars and tracks as well as the fantastic weather effects make Project Cars 2 a must buy for most racing fans especially sim racers with a wheel setup!