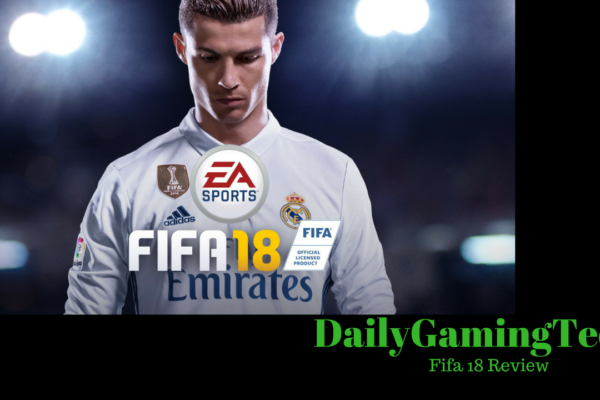 So Fifa 18 is finally here, how does it compare to last years title? We take a look and find out..

Every year we are treated to a new Fifa game with it’s minor improvements and some new features and this year is no different! Fifa 18 resumes the story mode that is the journey, returning Alex Hunter to his journey to the top. All the usual modes of Ultimate Team and Career mode are there as well as Ultimate Team gaining a new mode in Squad Battles.

A certain other rival has been stepping it’s game up year after year and Fifa has needed to do the same, licensing for Fifa is still leaps and bounds ahead and for most players this will be a decider as it adds so much being able to play as your favorite team with all the correct kits, names and logos! This years Fifa 18 features over 700 teams in over 30 different leagues so there is plenty of choice!

The full list of teams on offer can be found HERE

With all the licensing that Fifa has the authenticity is on another level to competitors, trademark celebrations can be seen from some of the worlds elite such as Antoine Griezmann’s Hotline Bling or Paulo Dybala’s mask.

As well as celebrations Fifa also captures player movements and styles with it clear to see when you are controlling certain stars like Ronaldo or Messi.

The atmosphere in the stadiums is an improvement over last years title as well, the crowds now feel more realistic, players interact with them as well as the supporters coming forward to the hoardings to celebrate with their idols!

The Frostbite engine which made it’s debut in last years Fifa 17 has really brought the franchise forward, it seems to have eradicated any of the previous engines drawbacks and given the developers more power to achieve what they set out to do. Everything looks fantastic; the lighting, weather effects and pitch wear are class leading as well as player animations and facial expressions that are getting closer and closer to the real thing!

While talking about stadiums and atmosphere it’s probably a good time to give the sound a mention, genuine crowd chants and cheering in the stadiums add to the immersion as well as commentary that is actually good to have on (PES take note) Fifa has done a great job of providing an immersive sounding experience as well as the usual decent track list for backing music in the menus.

Cristiano Ronaldo this year is the cover star and he’s heavily featured in the game, developers worked extremely hard to replicate the 32 year old in every way, from his style of play, to his celebration as well as his god like rating of 94!

One of Fifa’s most successful modes in Ultimate Team is back and if you are not familiar with it (Where have you been!?!) it’s the mode where players build a team from scratch, buying packs which contain players. Packs are offered in different levels from bronze to gold and the players inside replicate the pack colour.

Player packs can be brought by either earning in-game coins by completing matches or actually buying coins from the online marketplace with real money. Obviously players such as Cristiano Ronaldo and Lionel Messi are extremely rare but having just one of these in your ultimate team has to be your ultimate goal! Ultimate team is still one of Fifa’s strongest modes and building a team from scratch with your favorite stars will never get old!

The other way to acquire the best players for your ultimate team is the online marketplace, this is full of players that other gamers are selling and you will need to bid and win the auction to get the player you want.

Ultimate team gets a new mode in Fifa 18 called squad battles, a single player mode aimed at players who rather play against AI opponents instead of real players. Players will need to try and win as many games as possible to climb the leaderboard and win better prizes! This mode is great for anyone struggling online against real players and wants to earn coins for players or packs fast. The option to choose difficulty is present here and can make things more fun for the inexperienced players who don’t want to be playing against pro players online.

One of Fifa’s newer and popular features has to be The Journey featuring Alex Hunter, last year players took control of a young Alex Hunter and were given the task of guiding him through his first season as a professional footballer, this all ending in a FA Cup win. This year Alex is back and he’s going abroad with one of either PSG, Bayern Munich, Atletico Madrid or LA Galaxy as his next destination.

Hunters look can now be customised in Fifa 18

Without going into to much detail providing any spoilers of the journey in this years Fifa, Alex will now have the opportunity to win multiple trophies, players can also customize Hunter to their own taste by choosing clothing items, adding tatoos and changing his hair style among a few things.

Along the way Hunter will get to meet legends such as Antoine Griezmann, Thierry Henry, Dele Alli, Rio Ferdinand and Thomas Müller and of course Cristiano Ronaldo!

The journey has been a massive success for EA and they have used bits of it in other modes and this can be seen in the career, building on what is already a very solid career mode players now will control contract negotiations in more depth in interactive cut scenes similar to the journey style rather than the old menu style.

There is no voice acting through the cutscenes but still a nice feature instead of the menu based style.

How does the game control where it matters, on the pitch?

Fifa 18 is very attack heavy, wonder goals do seem to happen a fair bit as well as high score lines. While this can detract from the realism it adds to the fun! The difficulty is well set out and for new players the lower settings give players a decent chance to actually win and this is where the high scorelines come in, put the difficulty up and it’s a different story! Frustration is probably the only feeling you will be left with on the higher difficulty settings as your opponents knock the ball around you for fun!

EA have clearly worked on the responsiveness of the gameplay and this can be felt as you power past players with top stars like Ronaldo, passing felt a little too accurate at times and seemed to laser guide straight to the intended target, this combined with your team mates ability to seemingly control anything makes passing feel fast and fluid! While it is great when you are the one doing it this can be annoying when you are trying to defend against it, interceptions just seem alot less common in this years game as the ball doesn’t seem to have many loose passes.

The handling has improved over last year but it will be something EA need to work on to match the fluid and fun gameplay that PES 2018 is offering this year, Konami seemed to speed their game up and players seem more agile and responsive.

Substitutions slowing the match down?

Ever think you can’t be bothered to make a substitution? This years Fifa has that sorted, instead of going into the pause menu to make a sub, players can now do it on the fly during the match. When the ball goes out of play or a goal is scored the game will bring up an icon in the corner showing the RT (Xbox One) once the trigger is held it will show the player the suggested sub and then just press A to confirm. This is a great feature to keep the game flowing without the annoying pause during the match but the only downside is some off the suggested subs are just not something I personally would have chosen but still a great added feature to keep things moving.

Fifa 18 is a worthy upgrade from last years edition with the gameplay tweaks and extras it has. Graphically it is amazing to look at and with all the licenses and modes it has to offer there is no other football game out there that comes close. PES 2018 is also strong this year and arguably feels better when it comes to gameplay but just falls short because of licensing and lacks in a few of the modes that Fifa has. EA will need to step up even more next year to stay ahead of PES but for this year Fifa 18 is the footballing king!