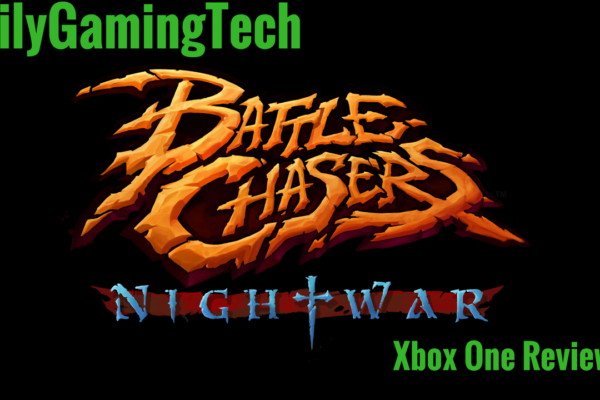 Nightwar is a JRPG inspired by some of the console RPG greats! It features deep dungeon diving, turn based combat and a rich story that’s driven by exploration of the world.

After playing the beta version on the PC a few months back and feeling impressed, Battle chasers is finally here and the full story can now be experienced!

When playing on the PC all them months ago one thing that did impress me was the visuals and with Battle Chasers finally here it’s good that things have not changed! Visually the game is beautifully drawn with some really bright and vibrant colours throughout, the artstyle is really something to look at and won’t disappoint!

The story will feature beautiful cinematic cut scenes as shown below :

Characters designed by Madureira are all very detailed with a clear attention to detail which is as expected, they all have their own personality and voices as well which match very well to the character onscreen. While not completely voiced and there is some reading to do there is more than enough voice acting (Some really impressive voice acting) and personality to get to know the character well.

Progressing through the story, characters will be met along the way all with their own tales, some such as Grimbeard (Giant deep voiced smithy) will have a selection of items for sale for you and your character to purchase, while Dogan the innkeeper will offer a place to rest (for a price of course!) as well as wares for you to browse and buy.

Movement around the game is done on a giant map with routes and roads and you will need to guide your characters to their next destination on pre-set routes, this is where combat can also happen. Where Battle Chasers has changed from the old usual RPG formula of random battles like in the old Final Fantasy series, Battle Chasers shows the enemies on the map and when you approach it will set a battle off, this stops constant battles popping up every few minutes and leaves the player to decide when to start the battle rather than random ambushes all the time.

When exploring dungeons in Battle Chasers the player is also left to decide when to start a battle with enemy characters walking around the dungeon area. Players can either approach the foe and start a battle or try to avoid them and dodge the battle completely. There is also the option to switch characters during the dungeon exploration and each one has their own ability such as Gully who can attack an enemy before the battle starts and deal a small amount of damage to gain a small advantage.

Enemies will be moving around the environment and if you are seen certain ones will chase you to initiate a battle.

Battles in Battle Chasers is turn based and when the battle starts players will be greeted with a menu at the bottom to choose what to do, actions contains the usual attacks that don’t use mana, whereas the abilities tab contains special attacks that do use up mana so while doing more damage or maybe healing more mana will have to be used strategically to make it through some of the tougher battles!

The other two options are the items which contain potions and flasks to restore things like health and mana as well as adding things like strength which which increase attack power. The last option is the standard option of Flee, if you decide the battle isn’t going to end well you can select flee and try to get away but remember sometimes it may fail and that will be that characters turn wasted!

Burst ability is slightly rarer and builds slowly, this however is shared between the party and not just the individual, the charge level will reach one of three levels (Story progress depending) and then can be used by by your character of choice to perform a powerful burst attack.

One dislike in the battles were the way the characters don’t really show any signs of wear, if they have their HP right down you would expect them to be struggling a bit but they carry on as normal and only show a small caption asking for help. There isn’t really a feeling that the character is struggling to stay alive.

On top of all this there is the massive amount of status effects that characters will have to contend with including things like poison and bleeding to name just a couple, these can be tackled by potions or certain spells that some characters can cast.

Grinding can be essential to progress

Leveling up characters can feel a bit of a grind at times but is something that you will need to do to progress through the story. Battle Chasers gives the option to go straight into battles that you are not ready for but the outcome will most likely not end well.

One of the fastest ways to level up and progress would be staying in the inn, this is because when you stay all the foes you have battled and defeated will be back again with XP there for the taking! Talking to characters in the game can add side quests and lead to bosses which is also essential to gain XP while keeping things from feeling to much of a grind, battling the same enemies over and over.

The story in Battle Chasers isn’t groundbreaking but I did find it enjoyable with a few twists and turns I wasn’t expecting but don’t worry there will be no spoilers here! I just found the whole experience really enjoyable with all the crafting, leveling and items to find in the dungeons as well as the ok story, there is even a fishing mini-game which was pretty fun!

Great visuals throughout with the beautiful art style and detailed characters all make Nightwar a really visually pleasing experience. The characters all have a great attention to detail with brilliant voice acting and personality as well as being interesting enough to make you want to keep playing. The story is ok and combined with all the crafting, looting and upgrades to your characters there is plenty to do! Combat is really good and very addictive all in all Battle Chasers Nightwar is a great game for RPG fans or anyone wanting to try RPG for the first time.