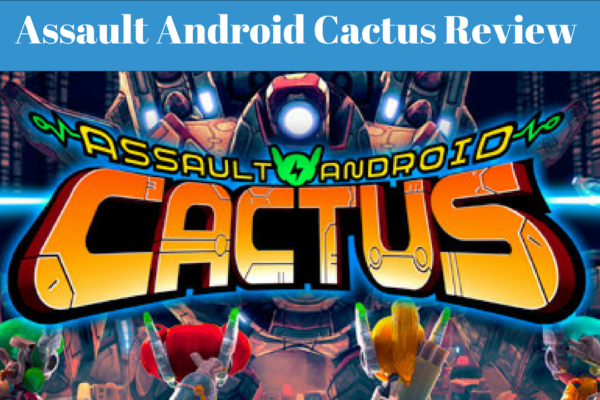 Assault Android Cactus is available now on Xbox One, PS4 and PC

The version tested for this review was on Xbox One X

Many will be probably wondering what Assault Android Cactus actually is? It’s an arcade style twin stick shooter set in a sci-fi universe. The Xbox One X version is also Xbox One X enhanced (way too many X’s there!) meaning players will be able to experience the game in full 4K resolution at 60fps!

Upon starting the Story players will be put through a short tutorial like mission just, here you will meet the games main Character Cactus, an Android with the task of clearing out rogue robots that have taken control of a spacecraft, The Genki Star. Finally Cactus makes a crash landing on the ship and is greeted by three other Androids, after a short fight with some of the rogue robots Cactus gets to speak to these three Androids who then explain what is actually happening on the ship in a short cut scene. There isn’t any voice acting apart from the odd word from robots but there isn’t too much to read that it ruins the experience.

The ships robot workforce is out of control and taken over the ship, The Nexus core that controls the ship has stopped responding so now Cactus and the other three Androids, Holly, Lemon and Coral will need to make their way to the Nexus core to find out what has happened.

The game is set out in stages, with each stage having levels for your selected Android to progress through. The first few levels are a bit of a warm up for what is to come, after these the action turns up a notch and enemies come thick and fast, picking up power cores dropped by the rogue robots you have defeated is essential as it boosts the power of your weapons and adds much more firepower as well as some boosting speed.

The main thing to remember is be careful not to get hit to many times because once the segments in the bar on the top left corner run out your Android will go down and you will have to repeatedly hit the right trigger to get the Android back up, when you go down you also lose all weapon power ups you have gathered. There is no real life gauge and you can go down as many times as you like but the thing you need to worry about is the battery level because once this runs out it’s game over! The battery level will constantly trickle down and your Android will have to keep a look out for batteries dropped by fallen robots to replenish the meter. This is a really good mechanic and makes a change from the health bar as it gives a certain sense of urgency to keep the battery topped up because while your character is down and not fighting the battery will still drop.

Each level is set out slightly different and enemies come at you constantly, picking up the power ups is something that is needed to survive and avoiding going down is crucial as the battery will run out faster than you realise! The enemies as you progress get stronger and really raise the bar for difficulty especially with some of the boss fights which are a massive challenge! The boss battles don’t hold back at all and will leave you frustrated thinking how the hell you can actually avoid the fire at you and progress through the level! After a few tries though it does get easier and you will see the best way to defeat the boss!

Addictive ranking system will have many coming back to improve!

After completing each stage you will be rewarded with a ranking for how you did. The ranking will cover where you ranked on the world leader board as well as giving you options to replay the level and try to improve the score.

The main campaign lasted me about five hours in total and left me wanting to improve the scores for each level, trying to move up the leaderboard is very addictive and something that many players will enjoy coming back too! There is sadly no online multiplayer but there is local co-op giving you the chance to get some friends over and play in up to four player multiplayer.

After the campaign is clear there is still a fair bit to do aside from constantly working to improve previous ranks in the levels, modes called daily drive and infinity drive are also available. Infinity drive allows your Android to take on endless waves of enemies in constantly changing environments, all the same rules apply as with the campaign but the difference is there is no let off! Daily drive is similar but just changes to a campaign arena for you to really test your skills!

Get saving them credits

There are also a few items to unlock along the way, the codex unlocks character bios telling you story behind certain Androids and robots. Then there is the art gallery which allows you to buy different renders from the credits earned through progression which is a nice touch and adds something to aim towards unlocking all there is available. Finally my favourite place to unlock anything and that’s the Ex Options, in here are the options that the game will have you saving for, there’s the mad option of putting the game in first person view making everything a whole different experience as well as numerous visual filters and gameplay options.

Assault Android Cactus is a game that has clearly received some real polish and attention to detail. The Xbox One X version is buttery smooth at both 4k and 60fps, visuals are looking a little dated but still have bright and colourful graphics as well as the gameplay being an absolute blast with rapidly fast movement and accurate shooting as well as a decent soundtrack. With all the modes and unlocks on offer this indie title is great value for money and is definitely a game that everyone should at least try…