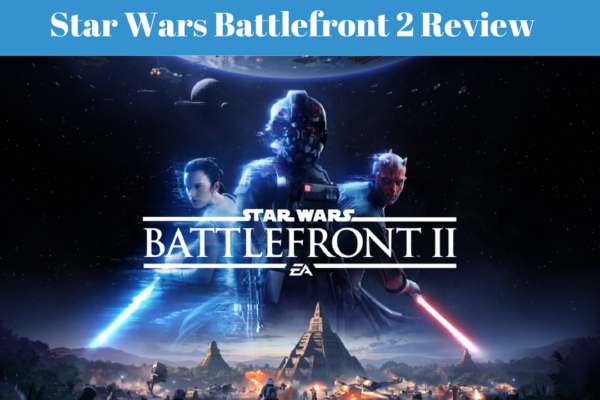 Star Wars fans it’s finally here!! But is the force strong with this one? Keep reading to find out….

After Star Wars Battlefront the launch of the sequel has been really highly anticipated! The latest game from EA features not only the highly popular multiplayer game modes but also a single player story mode.

The story without giving too much away is in my opinion a really good experience and a great addition over the original game, it’s a little predictable with it’s twists and turns but they did a great job with the scripting and it’s great to see some old faces in the game.

The single player story mode you in the shoes of Imperial special forces and leader of the Inferno Squad Iden Versio. Versio is the daughter of Garrick Versio the admiral in the Imperial Security Bureau, Pretty much from the start he deals directly with his daughter and after a few short objectives and cutscenes he will be giving her a highly important mission. Throughout the story there will also be the chance to try out some of the games other popular characters for example Han Solo, Luke Skywalker and Princess Leia!

Progressing through the story there is plenty of well written cutscenes that also feature great voice acting and facial animations. The game also  features many different combat options from flying X-Wings, Tie Fighters and even the Millennium Falcon to taking control of the walker AT-AT which really help to keep the story from getting stale. On foot aside from the blasters there are also times that you can control some of the games heroes, for example using Luke Skywalker to mow down multiple enemy Storm Troopers, the lightsaber is mostly a one swing kill, he also has force powers to take down multiple enemies as well as using the lightsaber to deflect enemy fire back. All of the heroes feel considerably stronger, all with their own special abilities.

The abilities can be changed before the mission or during the mission by finding and slicing open a load out box, in this box there is the ability to change the weapon as well as equip cards. The weapons range from smaller hand guns to the larger rifles that do more damage but fire at a slower rate, there is a fair bit of choice but choosing the right one for the mission can be crucial. The abilities that can be changed for example having a shield for a small amount of time to an impact grenade which detonates on contact.

Using characters like Luke and Han Solo was something that any Star Wars fan would love to do in a Star Wars game, however I did feel the lightsaber was a little awkward at times, the power was what you would expect, it was the movement that ruined it and I just felt it was a little cumbersome when trying to attack multiple enemies, I permanently found myself button bashing swinging at nothing especially on the bug killing mission.

The lightsaber combat like I explained can feel a little awkward but the blasters were really good fun and pack a good punch depending on which one you go for, weapons aside from having a primary fire, some also have a secondary fire like being able to fire a charge that explodes on impact. The different weapons available give the player a really good choice but they all hold that special Star Wars feeling and sound!

Talking about the sound and I have to say I was really impressed! Soundtracks throughout are very nostalgic and still sound as good now as they did in the past! The sound effects are also brilliant, the sound of the Tie fighters and millennium Falcon sound really authentic as well as the blasters and lightsabers, if you are a Star Wars fan there is plenty to like here!

Visually the game is a bit of a stunner! Playing on the Xbox One X some scenes blew me away with the 4K HDR visuals on offer, the colours and lighting while in some of the forests was amazing. There is also some serious detail gone into some of the characters, each one having incredible accuracy and all having facial animations that were both really good and believable, the whole package visually was really impressive.

Performance wise everything felt smooth with no noticeable slowdown at all!

The options are multiplayer and arcade, multiplayer is a selection of modes that allow you to take control of your favourite heroes as well as piloting some of the games vehicles and ships! These battles can have up to 40 players on the map at one time on many of the different planets the game has to offer.

The arcade mode is like a horde mode that allows you alone or with one other person to take on multiple AI enemies. The themed levels will allow players to try out some of their favourite light and dark forces characters, as you progress the number of enemies will increase and add to the challenge. The arcade mode is a good place to start if you want to master some of the characters, weapons and abilities before you jump into the highly competitive multiplayer.

In the multiplayer there are five different modes, all are a little different but the first two were the main ones for me. The first one is Galactic Assault and this is the large map forty player mode. This mode teams up players to tackle objectives while also being able to use some of the games many vehicles in iconic locations. This mode give the player of four different trooper classes to choose from and depending on progress the ability to play as a hero and call in special units. As you can imagine forty players on one map can be pretty intense but I found this by far the best multiplayer mode!

The next mode is Starfighter Assault, this is a twenty four player space battle mode, this mode is purely for pilots and will allow you to take control of fighters, bombers, interceptors and even heroes ships like the Falcon. This mode is great fun and a really good way to boost your flying skills.

The other three modes are Heroes Vs Villains, this mode puts players in a four on four battle using some of the greatest characters Star Wars has ever produced, this mode is a little calmer than the others and one of the best ways to experience some of the Star Wars greats! Strike and Blast are the other two modes, Strike is a sixteen player mode teaming two eight player teams to complete objectives, blast however is a twenty player mode putting player in fast paced close combat.

Now all this talk of controlling heroes and special ships comes at a cost, during battles you will acquire battle points, these points can then be traded during the match to unlock and use some of the games special characters like Luke Skywalker to unleash punishment on other players.

The battlefront 2 unlock system is pretty confusing and probably one of the worst parts of the whole game, EA took a huge step forward before release by doing away with the paid lootboxes! This was a giant step forward but time will tell if it will stay like this because I would expect the loot boxes to become available to buy again in the future which is a shame and hopefully one day the developers will realise these are not needed! Let us work for the rewards and gain them through progression!

Although the loot boxes are no longer brought they are still available and can be acquired by just signing in daily and getting the free daily box, the other way they are acquired is by buying them with credits that you have earned. The loot boxes are the main way to unlock items and contain in game credits, craft materials, star cards, victory poses and more. These boxes are essential to upgrading characters and acquiring the star cards.

This whole system feels like a bit of a grind, you can’t really stick to the class you want to upgrade as you maybe forced to go with another class because of the luck of the loot box, progression seems heavily tied to the loot boxes rather than just through hard work with the character class of your choice, most people will end up never using most of the great things on offer because it will probably stay locked away through the tricky system that’s in place. EA have said they are monitoring the system and adjusting the system so lets hope they can get the correct balance to improve the way the progression in multiplayer is done, one thing is for sure the pay to win loot boxes won’t be missed at all!

Visually stunning with a great story to play through, plenty of characters and vehicles which fans will love as well as the awesome soundtrack and sound effects. Multiplayer battles are on a large scale are with this are brilliant fun! EA took a major step forward in removing the pay to win loot boxes, hopefully they will never return but if they do only in a cosmetic way instead of giving pay to win players a major advantage. Everything considered battlefront 2 is well worth playing and even more so if you are a Star Wars fan!