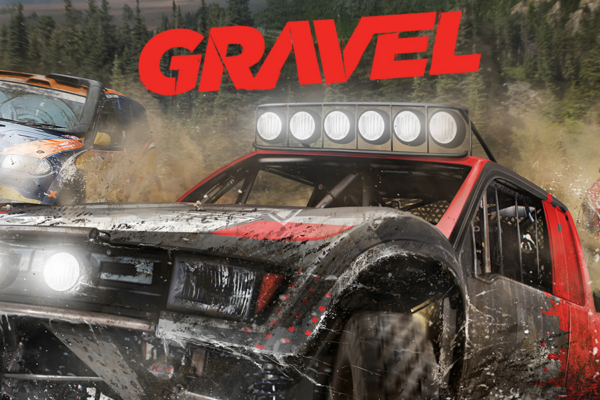 Gravel is an off road racer going up against some of the best out there, does it finish at the front of the pack or is it another misfiring race title.

As soon as the game starts you are greeted with a very clear and well laid out menu. The off-road masters is the single player career mode and this is where the challenge will begin! The other modes are: Free Race, Xbox Live (Online Multiplayer), Time Attack, Weekly Challenges and then Downloadable Content.

Jumping straight into the off-road masters players are greeted with the chance to join in a off-road racing league in a TV series. Commentary is a little weird and the intro videos for your rivals are beyond cheesy but stick with it because there is plenty of fun to be had here! The off-road masters is set up in episodes, each episode features a set amount of races, sometimes three or sometimes more. Each race will award up to three stars depending on your finishing position, these stars are crucial to unlocking further episodes and progressing through the masters series.

As well as the episodes there is the special episodes which feature races against a main rival and treat you to the over the top, cheesy cut-scene introducing them. There are five special episodes in total with the final one taking on Sean Walker to become the champion!

The way the episodes are set out is nice and simple and did tend to keep me coming back for more until it was complete with every race having three stars awarded. The races all carry a good amount of variety, checkpoint races, time attack, lap racing, smash up and championships all mix things up a bit. The smash up races are something new and different to what I have seen before, the race features a row of boxes spread all along the track to the end, each box as you approach will have either a green arrow or a red cross. Smash up is a good challenge for reactions as sometimes the arrows will be very late up leaving you heading towards a cross box that will stop you in your tracks completely! The other thing to make the smash up races even more of a challenge is the fact there is no rewind function available!

Variety also carries over into the track types and vehicles. The tracks are made up and feature many different surface types such as Gravel (Obviously!), mud, snow and tarmac to name a few, this with different weather types keeps everything from getting a little stale. The roster of vehicles also carries some variety with the ability to use some old classic rally cars such as the Ford RS200 and Focus RS, this combined with different vehicle types just gives Gravel enough to keep players wanting to play to unlock them. Unlocking vehicles is done by reaching a certain level by winning show points, this also will unlock certain liveries for each vehicle when the required level has been hit. The show points are awarded for perform things like drifts and getting air during the race, they also have a multiplier to max out the points you get, your final position also changes the amount of points awarded so winning isn’t just important for the title but these points are crucial in unlocking everything!

Free race mode leaves little to the imagination, giving players the chance to take on the track of their choice with any car that’s has been unlocked. Online multiplayer is where you will be heading once the off-road masters has been completed, the options are limited here and to the point really, the ability to create your own match or join one is here and there is also the online leader-board you can take a look at. When playing online you have the ability to vote for one of the selected tracks and races, if there is only two players the other slots will fill with AI racers and the vote will go with the host, obviously with more players the race you do will be decided by the highest number of votes!

Online mode is good fun and a great way to get racing against friends, I did find it sometimes took a while for a race to be found but once your in and find someone who doesn’t quit the races can come pretty fast. I say about the quitting because it is an issue, if the player decides to quit the whole race will stop and throw you out of it which can be annoying!

Time attack and weekly challenges are also something to keep you playing, obviously time attack is what it is, taking on circuits in the fastest time possible! The weekly challenges are a set challenge with a certain track and vehicle all needing to be completed within the set time, winning these results in being awarded large sums of show points towards unlocking vehicles and liveries as well as bringing your level up.

Before races there are a few options to adjust your experience depending on your own skill level. Adjusting the options all impacts the percentage of bonus you will receive at the end of the race though so try to turn off as many assists as possible to maximise the bonus percentage! Gravel does feature damage and in the options this can be turned to either cosmetic or active depending on you level, the active damage will make a difference to the handling of the vehicle but add a decent bonus percentage at the end of the race! The view during the race can also be changed depending on preference, there is a few different options from outside the car and also inside depending on what you prefer.

Now onto the all important part and that’s how does Gravel actually race. One thing the game isn’t trying to be is a simulator, this is fun arcade style racer with over the top physics and at times great visuals! The handling is fast, sharp and very intuitive, in no time you will find yourself drifting round the tracks at top speed! The difficulty is something that I found just right as the AI was really good, most players will get a really good challenge from the AI racers in Gravel! Don’t worry if you lose it on the last corner or anything though because Gravel does have a rewind function allowing you to go back and correct the mistake!

The visuals are actually really impressive using the Nvidia engine but performance can suffer as I found on a few occasions with the odd slowdown and also a few times the game appeared to totally lock up before suddenly deciding to carry on the race! Car sounds are also pretty authentic with plenty of rally pops and bangs as the vehicle hits the limiter during a drift!

The concern for me with Gravel will be it’s replayability, once the main career is over there isn’t much left to do but grind to unlock the last few locked liveries. The online multiplayer does get pretty repetitive fast and most players will only be grinding towards the higher levels to unlock liveries for the last few achievements or trophies the game has otherwise there really isn’t much to aim for. Maybe in the future there will however be DLC available to extend things a bit but as of now the only DLC available is in the form of extra cars.

Gravel is a fast, fun arcade racer! Over the top physics combined with fun handling, great visuals and sound effects all make Gravel a pretty solid experience, only slight performance issues can stutter the experience but it isn’t something that ruins the experience. The races with the right difficulty can be challenging as the AI will really push most players! The replayability once the main game is complete with all the cars being unlocked may leave many looking for something new, there isn’t much to keep players wanting to come back apart from a few locked liveries although some may want to log back on to complete the weekly challenges or compete online.