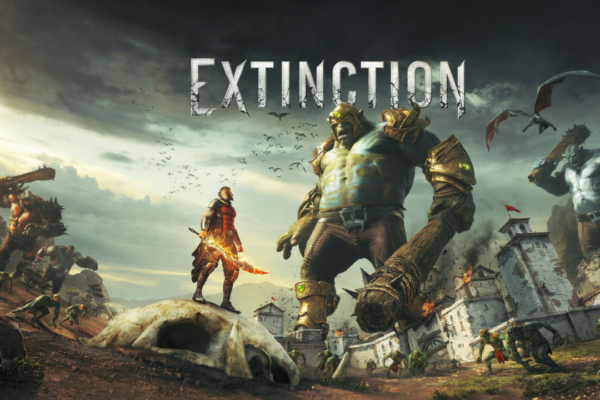 Tested on Xbox One X for this review.

With games like A.O.T 2 releasing and Shadow Of Colossus already here can Extinction make it’s make and stand up to the fight? keep reading to see what we thought of this titan slayer.

Extinction releases with a triple A price tag of £54.99 on the Xbox store for the standard edition and £64.99 for the Deluxe edition which includes the days of Dolorum season pass as well as Brightsteel City. At these high prices Extinction really has got a lot to live up to! Sadly from the off it’s clear Extinction isn’t going to live up to it’s large price with some very basic cut-scenes and dated visuals being the first thing you notice!

Taking the roll of Avil, one of the worlds last sentinel’s you will be tasked with taking down huge monsters standing over 150 feet tall! These monsters are called Ravenii, out to destroy mankind for good Avil will need to use all of his skills to bring them down and save mankind from extinction.

The main menu from the start offers options to jump straight into the campaign as well as three other game modes which include: Daily challenge, Extinction and skirmish.

The campaign is set into chapters, each chapter has multiple missions inside to work through to then unlock the next chapter. Missions all have a primary objective such as defending a city and taking down a Ravenii but also there will be other requirements to earn the bonus medals, these vary and include completing the mission before a set time or taking down a Ravenii a certain way.

The core gameplay is where everything falls a little flat, the first couple of times taking a Ravenii’s head off can be fun but it soon gets very repetitive, the whole Extinction experience can be a little boring after the first few fights. The game is a constant loop of taking down the smaller Jackals and then tackling the larger Ravenii, there is no set path on what to take down first so it’s up to the player to choose.

Avil will work on saving civilians against the smaller jackals and teleporting them to safety, then onto taking down the Ravenii who take a little more work.

In the top right side of the screen will show a percentage, keeping this as high as possible is essential as it shows how many civilians have been killed and also how much damage the city has taken through the attacks from the Ravenii, Avil will need to work fast to control the jackals while trying to take down the Ravenii and plan the fastest way to save as much as possible!

The fights with the smaller Jackals are a bit of a side feature and will leave most bored and moving straight onto the Ravenii! Some Ravenii have armour that will need to be destroyed before the Ravenii can be brought down to finally execute it. Like I said previously the first couple of times this can be fun but it soon wears thin, the Ravenii do have some variety in their armour but each mission does feel like you are just doing the same thing.

While aiming using a Rune strike time goes into slow motion which is helpful aiming at some of the Ravenii limbs and neck, breaking off the armour and then legs is essential to keeping them under control as they will sit for a while until the limb regenerates, this is also a dangerous time for Avil though because he can be hit easily and one hit is enough to cause death. Dying won’t affect progress to much though as you will respawn in the city not far from the battle.

Extinction does offer some form of progression though and at the end of each mission Avil will acquire skill points, these points can be used to increase Avil’s skills. Things like attack power will increase as well as reducing gravity while performing a Rune Strike in slow motion which all aid in taking down the massive beasts!

The art style in Extinction is different, it can look fairly dated at times but it does the job well enough and performance wise everything feels smooth with no slowdown. The story is told by characters throughout the levels all with their own voice acting which is always a nice feature.

The game itself controls pretty well with very basic controls, everything is fast and fluid with it’s parkour aspect working pretty well. The main attacks will be the basic slash attack which you will use on the jackals and the Rune Strike on the Ravenii, Avil can also dodge and use his grapple but most of the time you will be using the Rune strike when near the Ravenii.

Sadly like most of Extinction the last thing I want to mention is the story and it’s the same as the rest of the game, very dull and gets boring fast! The missions that are basically all the same, saving civilians and taking down Ravenii but with slightly different objectives. The daily challenge may keep some fans busy or even anyone who has brought it and determined to actually play it to get their moneys worth at it’s huge price tag!

Extinction sadly could could have been much more but it’s really all a pretty flat experience which gets stale pretty fast. The bad cutscenes show straight away what you are in for. Voice acting is nice and the performance side of things in parkour and fighting was smooth it’s just repetitive and in the end it will leave players feeling bored, ready to move onto something new before the whole game is even finished. Extinction sadly is one to miss!