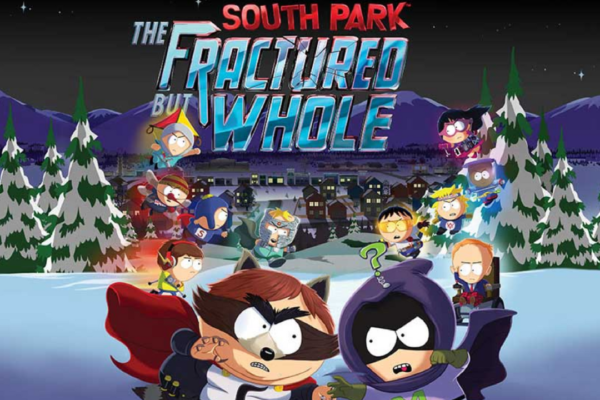 Tested on Nintendo Switch for this review.

After the initial release of The Fractured But Whole back in October 2017 on PS4, Xbox One and PC, South Park fans who owned a Nintendo Switch had a wait to finally see Cartman and his friends on Nintendo’s handheld system.  Finally the wait is over and Switch players can help Cartman in the sequel to the highly popular Stick Of Truth.

For anyone new to the series The Fractured But Whole story take place after the events of the first game, The Stick Of Truth. Taking control of Douchebag the new kid in town players will need to assist Cartman aka the Coon and take on the The Freedom Pals who are led by none other than Kenny also known as Mysterion!

Just a quick note before we get started, if you buy South Park The Fractured But Whole digitally you will also need to invest in a MicroSD card if you haven’t already got one. The game itself is 14GB and then there is a 3GB patch that is added taking the game to 17GB in total.

Nintendo switch has it’s fair share of RPG games already so South Park will have it’s work cut out to make it’s mark but I’m pleased to say it holds it’s own well! Growing up when South Park was one of the most popular shows on TV always gave me a slight interest in the game but even people who have never seen South Park before will find something to like here!

The RPG aspect of The Fractured But Whole is very strong and building your character and crafting items will keep players entertained for hours! The characters also carry a very strong line up and include all of the past favourites which include Cartman, Kenny and friends as well as some lesser known favourites such as Big Gay Al to name a few.

The dialogue throughout is one of  the games strongest points and it really carries the tradition on from the cartoon years ago, constantly making fun of just about everyone and everything! Some jokes will need players needing an open mind because I can see some actually getting offended but in all honesty that’s what South Park has always been about. It isn’t long until you will see what I am talking about either, making your character at the start will ask you to choose skin colour and the darker you choose the harder the games difficulty!

Another one of my favourite things has to be audio and it really is something else! The voice acting is brilliant and the nostalgia for fans of the series from years ago will really appreciate the effort that has gone into it, on many occasions you will probably find yourself chuckling away at some of the games funniest bits! The games music also is superb with a massive variety of music tracks on offer and sound effects that sound a little too real at times with farting that seems to be a little too detailed to be fake! I’m not sure I would want to be around when that was recorded!

Visually the game retains all the great graphics from the original show and the characters all have their own details as well as the game world being well drawn with great detail throughout. The Nintendo Switch is not quite as powerful as the other formats that released this game but it has to be said that it still looks great on the Switch and performance is good too! Handheld mode just seems to fit the game perfectly with it’s on the go playability but having the option to play on the big screen as well is always one of the Switch’s strong points and South Park makes great use of both!

The gameplay lets you explore the world of South Park, while exploring houses you will more than likely uncover some unexpected items such as buttplugs and lube to name a couple but i suppose this was to be expected being a South Park game after all but you really do never know what you might find to craft with or sell. Even the toilet minigame is just weird! You need to sit on the toilet and master it by basically doing a perfect poo!

Not long after you start you will need to select a class for Douchebag and this will include different abilities.

The class selection allows you to put a team together to make battle winning a little easier so getting it right really can be important for the RPG battle side of things. It was a nice feature to see references to some Marvel characters as well as shown in the video below:

The classes don’t however stop there and as you progress more will unlock for you to choose and use! The whole setup is also great and allows a huge amount of customisation to get your team right for battle, choosing between things like having a ranged attacker or someone who can take enemies close by is all something you will need to factor in before battle.

The battles themselves take place on a large grid and you will need to move your team into position to attack your foe, it’s all turn based so planning ahead is also key here to win the battle as being to close when the enemy has their turn could end the battle prematurely and with a loss! The game also makes use of many statuses and this can be a really game changer in battle, slowing someone down can really swing things in your favour and it’s definitely something you will want to make use of! The amount of variation really is great when it comes to the battle side of things with a huge amount of different attacks, abilities, items and statuses to keep things from getting stale!

No cheating either by trying to cut corners for codes, as if you haven’t found the item or code needed to progress the game will tell you!

Lastly onto the controls with the Switch and again South Park excels here. Having played the game before on the Xbox One the Switch really does make great use of it’s portable side and even the touch screen is in use and does make things feel much more fluid at times, there is also so many different options for players such as using the Joy-cons, gamepad or just as a handheld itself, South Park really does feel at home on the Switch and Ubisoft has really done a great job bringing it over to the console!

South Park The Fractured But Whole can only really be considered a success on the Nintendo Switch, it’s so well matched to the portable side of the Switch and makes great use of the touchscreen and multiple ways of playing with different controller options as well as the obvious ability to play on the big screen when you want to. The dialogue and characters are well written with superb voice acting as well as a very impressive soundtrack all making it a brilliant experience throughout! Gameplay is fun and has plenty of variety with different classes and battles never get boring with so many different ways to tackle it. Everything you would want and more if your a South Park fan, even if your not it’s well worth playing!

South Park The Fractured But Whole