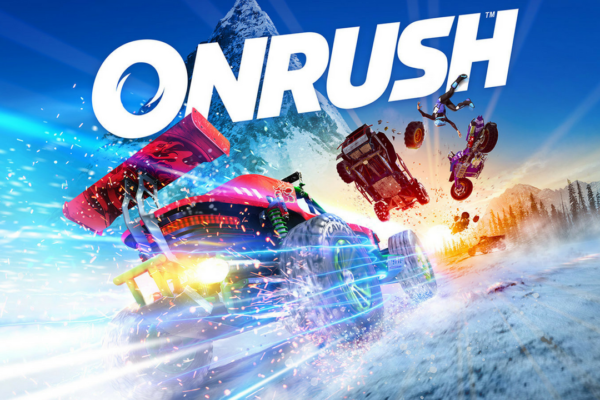 Onrush is not really like anything else I’ve played in a while, but is it any good? Lets find out….

One thing from the start is if you think Onrush is a racer you will be mistaken, it’s something very different but something I personally found refreshing and fun! There’s no start or finish line, just a whole lot of carnage on some beautiful environments!

Taking your team of vehicles against the other team is how things play out with a variety of game modes to choose from these can be played either solo or multiplayer. The first mode is the Overdrive mode which requires players to chain boost together to earn points for their team and eventually win the match. The other modes are countdown which has players driving through gates to add time onto the teams clock the first team to run out of time will lose, the switch mode is an interesting one, everyone will have three lives and start on a bike, each time you are knocked off you will lose a life and switch to the next vehicle class until eventually you are are of lives, once the whole team is out of lives it’s game over. Finally the last mode is lockdown which has the team working together to gain control of small zones.

The career is set into six different chapters all containing events which will need to be completed and enough star coins earned to open the next races and chapters. Each event will also have match challenges that can be completed for better rewards.

Once out and driving everything is a little confusing and does leave you wondering if you are even helping your team at times but once you know what your doing and everything comes together Onrush is really good fun! Everything in Onrush is about boost and you simply can’t get enough of it! Gaining boost is simple, take jumps, barrel rolls, destroy others to fill your boost bar, don’t hold on and save boost though because one you will fall behind and two you actually get rewarded for using it as it fills the vehicles own special ability meter which can then be used to cause even more carnage!

Keeping on boost is essential to actually keeping the game alive as being without it actually feels punishingly slow compared to everyone else, it also won’t take long until you are taken out by an enemy vehicle. While on the subject of the take downs Onrush has got these just right as you can feel the bone crunching clatter as you smash your enemy into the wall or as the screen goes a little dim with an aggressive shake as you are nearly wiped out. Dim slow cars and bikes called fodder vehicles are also on the track which race alongside both teams and are just there to be taken out and build your boost bar.

Taking out the enemy team is far more rewarding than the fodder vehicles but it did on a couple of occasions cause me to crash due to the slowed kill cam as it actually turns the camera backwards and you can no longer see where you are going until it spins back round and on a couple of occasions this was too late! Being taken out will put you back to a vehicle selection screen with a small timer, once the timer is up you will be thrown straight back into the action around enemies and teammates alike which stops the game losing any of it’s pace after a crash!

The controls in Onrush do feel a little light at first and will take time for the player to get the hang of but once you do get there the game is great fun!

Onrush also gives players a decent variety when it comes to vehicle choice with eight different classes to choose from which all have their own strengths and weaknesses. Each class has different abilities as well as a special ability that can be used when the boost bar has been used enough to fill the special ability bar up.

The game does feature the dreaded loot boxes in the form of gear crates but thankfully they only contain cosmetic items and are pretty easy to obtain through actually just playing the game. Credits acquired through playing can also be spent to personalise the vehicles, characters and tombstones which is basically your own little icon. One thing the game isn’t lacking is content in my opinion there is so much to unlock and acquire!

Lastly onto something that’s always a little important and that’s the visuals and then the sound! Visually I was really impressed, the colours and detail in these imaginative tracks, everything looked fantastic, vibrant and detailed while all playing out well performance wise with no noticeable stutter or lag on the Xbox One X. The options menu also allows players to either favour the frame rate or resolution which is always a nice option have.

Lastly sound and again I thought it was honestly really good, maybe the engine sounds could be a little more aggressive but the backing music was perfect and really fits well with what is happening on screen, especially on boost which if you are good is most of the time!

Onrush isn’t really like anything out there but does feel like a mixture of a few past classics such as burnout and motorstorm while also feeling like something completely new and fresh! The different modes help to keep everything from feeling repetitive as well as having a decent amount of cosmetics to unlock and acquire! The handling will take a little time to get used to but once you do Onrush is just pure fun! No racing as finishing first isn’t an option just smash you opponents to bits and work as a team to win! Onrush in my opinion does enough to make it well worth the purchase and is so unique I would have to recommend trying it!