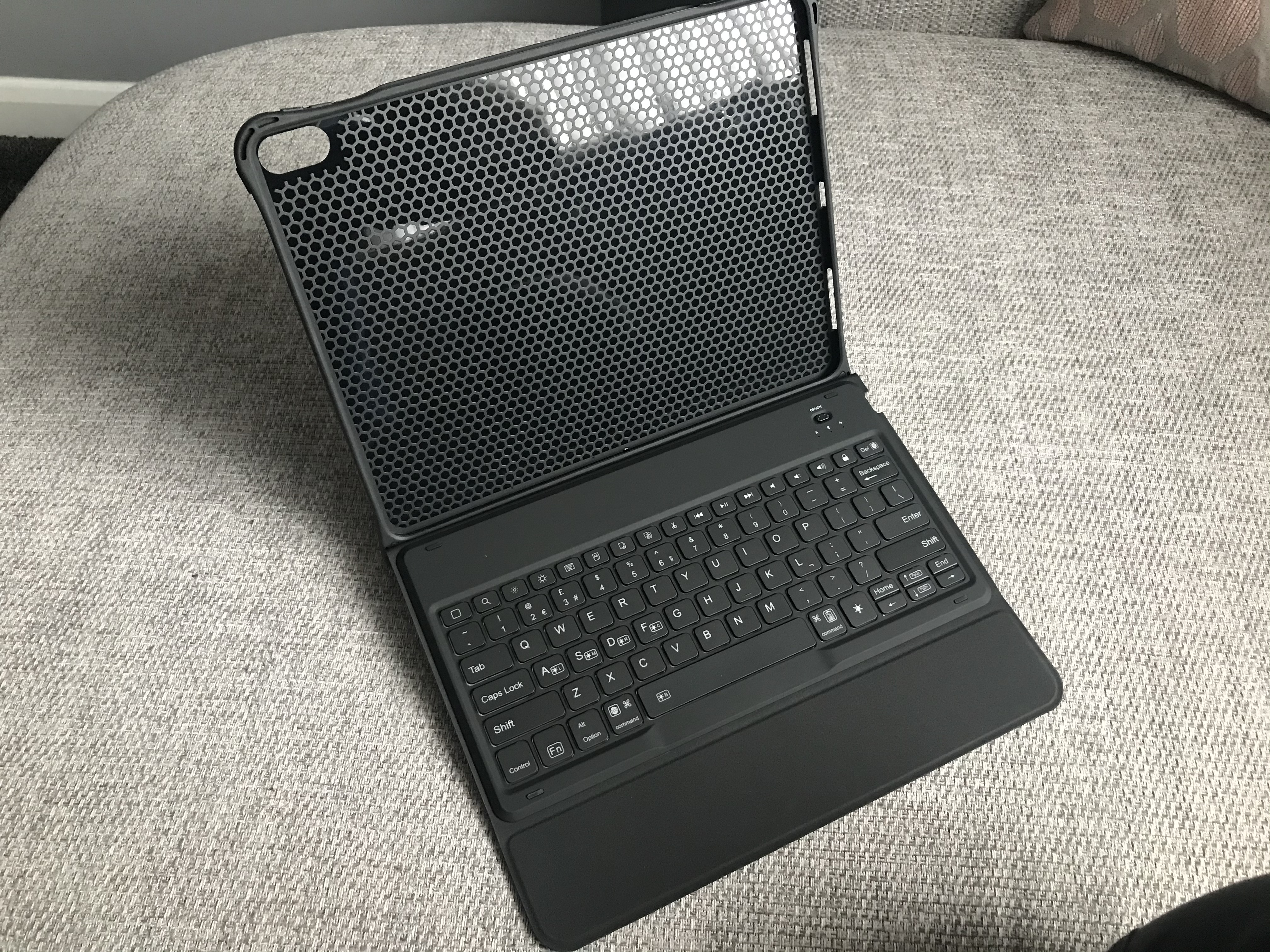 Available now in both 12.9 and 11 inch versions from Amazon, click HERE to see the 12.9 Inch version

With so many options Keyboard case options available for the IPad Pro it can be a little daunting trying to find one that suits your needs and is actually any good!

I recently brought a MacBook Pro, mainly for writing and web design. I am more than happy with what it can do but I have always felt that there is a little more I could get out of my IPad Pro which I use mainly for video editing and cropping my pictures so I have always wondered if possibly one day my IPad would replace the MacBook and slowly I have been using the MacBook less and going to the IPad. Recently I was put in a position where I have been left with little choice but to use my IPad over the MacBook as my logic board decided to fail and left me with only the IPad to work from!

This is where it got a little interesting for me as the only major drawback with the IPad was getting files across and airdrop was the only real fast option, however with the latest IOS update and the addition of mouse support and external drive support I have managed fine without the MacBook and I’m even starting to consider selling due to it probably not getting used and this is down to something I decided to buy to finally make the IPad more like a laptop and that’s the Inateck keyboard case.

I researched a few different cases and really wasn’t that interested in the official apple case, I’ve never been impressed with the keyboard on my MacBook and trying the keys on the Apple IPad case they are very similar, I don’t like the feel oh hardly any travel and that is exactly how the keyboard performs so it really ruled out that option, obviously if your after a very minimal, compact look then the Apple case is the way to go but if you are after protection, decent keyboard with backlighting the main to options for me were the Logitech Slim Folio Pro and the Inateck Keyboard Case.

I have tried both cases and the Logitech is also a very good case with some features such as USB-C charging that aren’t found on the Inateck but with the Inateck coming in at around half the price of the Logitech and loads less than the official Apple case I first thought that the Inateck was a little to good to be true, I am glad to say that I was actually wrong! The Inateck has so many features for the money it amazes me, shortcut keys with 16 in total with some really useful ones like cut, paste and copy as well as a delete button that works allowing you to delete rather than just backspace on an IPad!! It also features a backlight which surprisingly is RGB and allows the user to set the left, Center and right section to different colours, this can also be adjusted to pulse as well as setting different brightness levels.

Connection to the IPad is through Bluetooth which takes seconds to setup and since installed every time the screen is on the keyboard is ready instantly with no lag or delay. I have typed this whole review on the keyboard and the key travel is fantastic it really is a nice tactile feel compared to some others out there and the keys are more than big enough which has always been another gripe with some keyboard cases. Also with the keyboard being Bluetooth it does allow users to use the keyboard with other devices and this is made even better with the fact the keyboard and case can be completely separated and used solely as a case or a keyboard, if you do a lot of drawing this is a great feature as it makes the IPad just an Ipad again without the need to remove from the case.

The Apple Pencil is also more than compatible with the Inateck case, on the top where is charges there is a groove for the pencil and it is covered with a fabric which still allows the pencil to charge which is a great feature meaning your IPad is still protected when the pencil is away. Talking about the Apple Pencil being put away is another feature this case has and it has a slot at the bottom of the case which allows users to store the Pencil safely away when not in use. To have the Pencil stored away it did mean the case had to be made slightly wider than the IPad itself but for me that is a trade off worth making as at least the Pencil is no longer being chucked around in my bag, instead safely stored in the case with the IPad where it can’t get lost or damaged!

The battery on the keyboard has lasted a fair few days already for me without any need to charge it at all. A Micro USB slot is installed on the side of the case and while it’s a shame the device doesn’t have a USB-C connection it is to be expected at this price point! The case does include a Micro USB cable in the box so it’s only another cable to carry with you but from my use so far I don’t think the keyboard will need to be charged that much anyway!

The case itself is very very protective and covers the IPad all the way round with only cut outs for the speakers and charger port, the buttons are all covered and have very responsive cover buttons that work fine. The kickstand was something that can be a little tricky and fiddly, There is two flaps on the back of the case in which you will need to lower the stand part first and the bit that clips in, once they are both out it is effortless it’s just the initial pulling them down that can be fiddly. The kickstand itself slots together with small magnets and allows for three different angles, using on your lap may need something solid underneath as the main support is fairly thin and can be difficult to sit right with it unless you have your legs up to support it from underneath it.

The case is a little on the bulky side compared to the other two I have spoke about but for the protection it provides this isn’t something that bothers me. Something the Apple case does that the Inateck doesn’t is leave key marks on the screen, the Inateck is kept away from the IPad screen because of the edges on the case so it stops the keys from rubbing on the screen and does mean you don’t actually need a screen protector if you don’t want one although I personally would always have one to be safe!

The Inateck Bluetooth Keyboard case in my eyes is an absolute bargain compared to the competition, It’s well made, protective, plenty of features as well as having a brilliant keyboard! If you want to take advantage of your IPad Pro this is a must have and at the price of £69.99 currently on Amazon with an extra 10% off, I can’t honestly recommend it enough! USB-C would have been great but with how little it will need charging I can live with Micro USB! Stores for the Apple Pencil is great and being able to charge it while your IPad is in the case is great! If you want to up your productivity on your IPad and make it a little more like a laptop the Inateck keyboard case is a great option at a great price and we highly recommend it!