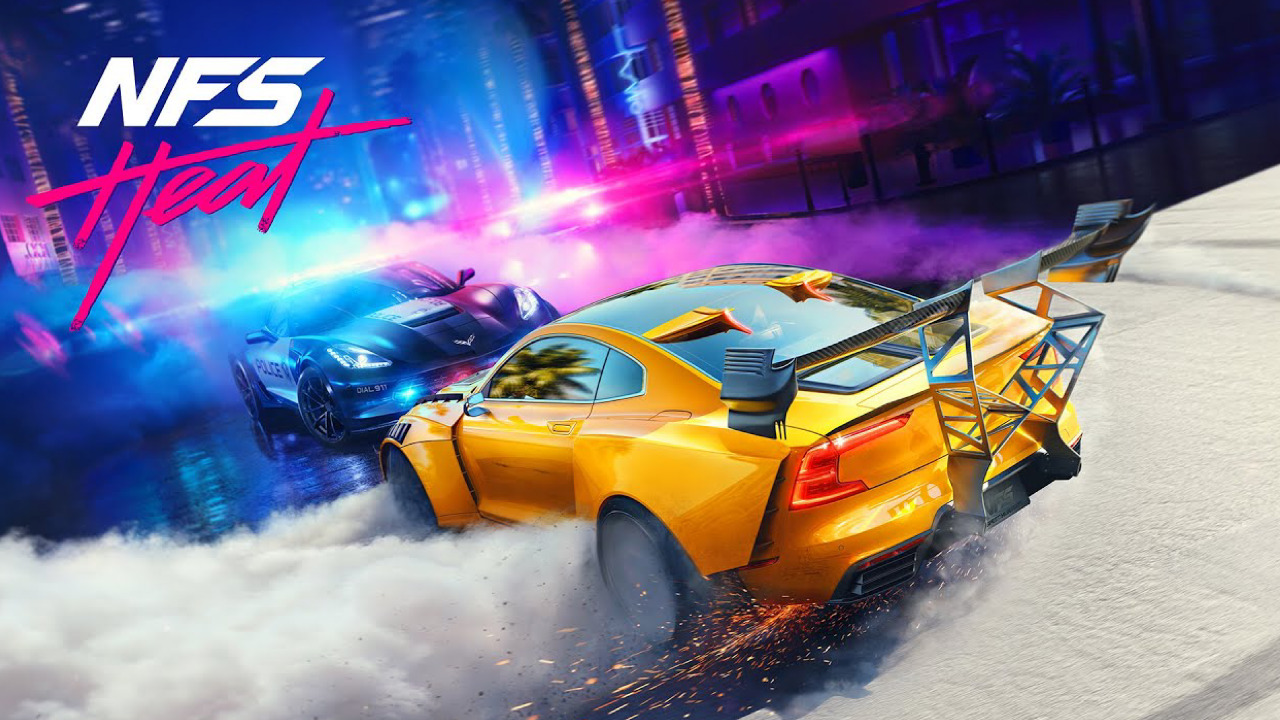 After what was for me personally a disappointment in Need For Speed Payback we now have a Heat, promising to take much of what was good from previous titles such as underground and most wanted do we finally have a NFS game that can live up to the hype?

As soon as you start your treated to the usual cheeses NFS cutscenes that most of us have become accustomed to over the years, not sure when EA will ever stop this or actually make a story without so many bad lines and dodgy acting! One thing Heat does have going for it though is it’s looks! The game looks great, especially at night when I thought it really shows off it’s visuals! Reflections look fantastic in puddles and the lighting effects are really impressive, playing the game on an Xbox One X I didn’t notice any slowdown and the game ran smoothly throughout.

The selection of cars is also pretty impressive with a few I wouldn’t have expected to see in a NFS game, sadly there isn’t really any sort of damage as at worst you might get a lose bonnet or a smashed window as there won’t be any parts flying off the car or any major damage shown as you would see in a game like Forza for instance. The damage however does mean something in the game and if you take enough damage while trying to escape the chasing police you will end up getting busted and lose some of your hard earned RP!

The police in Heat are a little hit and miss, in the day it’s pretty hard to actually get them to go after you, I was able to hit a parked police car with someone in it and they still didn’t come after me, this was after doing a burnout right in front of them and causing damage to nearby surroundings as well as speeding past them, daytime it seems the police are sleeping at the wheel as most things you do will go completely unnoticed! In the night however it’s totally the opposite, it seems even a look in their direction can cause a chase!

The police chases are pretty hard work and can seriously affect the position you finish a race especially with enough of them after you, trying not to take to much damage while also trying to take them out is tricky!

The game allows you to either select day or night to explore the city, daytime will allow you to take part in legal organised races to earn the games currency called “bank” who knows why they couldn’t have just called it money but anyway it is bank. Night time is where things step up a little though and the RP is earned! Earning RP is essential to progressing unlocking new cars and parts to increase your chances of winning races and making it all the way to the top.

With the cops much more interested in you at night it’s a fair bit more of a risk as being caught will lose that precious RP you have been earning! Staying out at night is beneficial though as the higher the heat level, the bigger the multiplier for the RP but obviously this comes at a risk because the higher the heat level the harder the cops are to shake off! Your vehicle itself can be taken down by the police if it takes enough damage and will result in a bust one way round this however is to find gas stations as driving though one will repair your car completely and keep you going just that bit longer and how fully escaping the cops! Gas stations can only be used three times within the night so using them to fast could leave you in trouble if you take damage and have none left.

The handling in NFS Heat is very much an arcade feel with plenty and I really mean plenty of drifting! Double tapping the accelerator while turning will throw the car into a drift and you will need to keep things steady to stop the car from spinning completely! Racing itself can be challenging and opponent AI in both racers and police can be fairly aggressive especially when trying to shake the cops off! Police do seem to have amazingly fast cars, always somehow able to catch up with you no matter how well you drive.

The handling can take a little while to get used to but It is fun when you get used to it. Adding things like NOS and other performance upgrade really assist in the racing and do actually make a difference to the way the car feels. Sadly for anyone wanting a realistic experience there is no in-car cockpit view, there are however four others including a view just on the bonnet so there is a few there to find the best one that fits your own style.

Heat features a very large open map with plenty to explore and unlock as you go, there are billboards to smash, graffiti art to collect and speed traps to fly through pushing your vehicle to the max to achieve a three star speed. I counted nineteen different districts over the map all with their own things to complete and explore, safe houses are spread around and worth finding as they provide a way to fast travel once they have been found and unlocked.

Aside from racing at night and in the day there is also daily challenges available to gain a little more RP and Bank, they are five different things to complete and well worth doing to maximise earnings each day you play.

Multiplayer is the last aspect of heat I want to mention, the game will allow you to play completely solo if you wish but also gives players a multiplayer option as well. The Mulitplayer mode will have other players on the map with you and allow you to create a crew if you wish to.

Last thing I want to give a quick mention is the games sound throughout. All in all the sound is good, engine sounds are all different and allow players to hear a clear difference between car types, the exhaust note can also be changed and customised in the setup which is a nice feature and does make a noticeable sound difference to the cars. Voice acting while very cheesy is actually good and does the job very well as does the background music throughout especially when you hear a few well known tracks. EA has done a really good job with the games sound and visuals it just needs some tweaks here and there to get the NFS series back to where it once was!

NFS Heat isn’t a perfect game but it is definitely a step in the right direction for the series. The visuals and performance are great with some impressive lighting and visuals at night. There is a massive selection of cars all with a huge amount of customisation in performance and cosmetic. Damage on the cars would have been good but it is not a dealbreaker although the handling can feel a little off at first with drifting being a key feature in it from the off. Sound throughout is very strong with decent voice acting, car sounds and a good track list. NFS Heat is getting the series back to where it once was and it might actually be a game worth playing for fans of the series, the storyline still features the same cheesy cutscenes but we have become used to this in a NFS game nowadays.