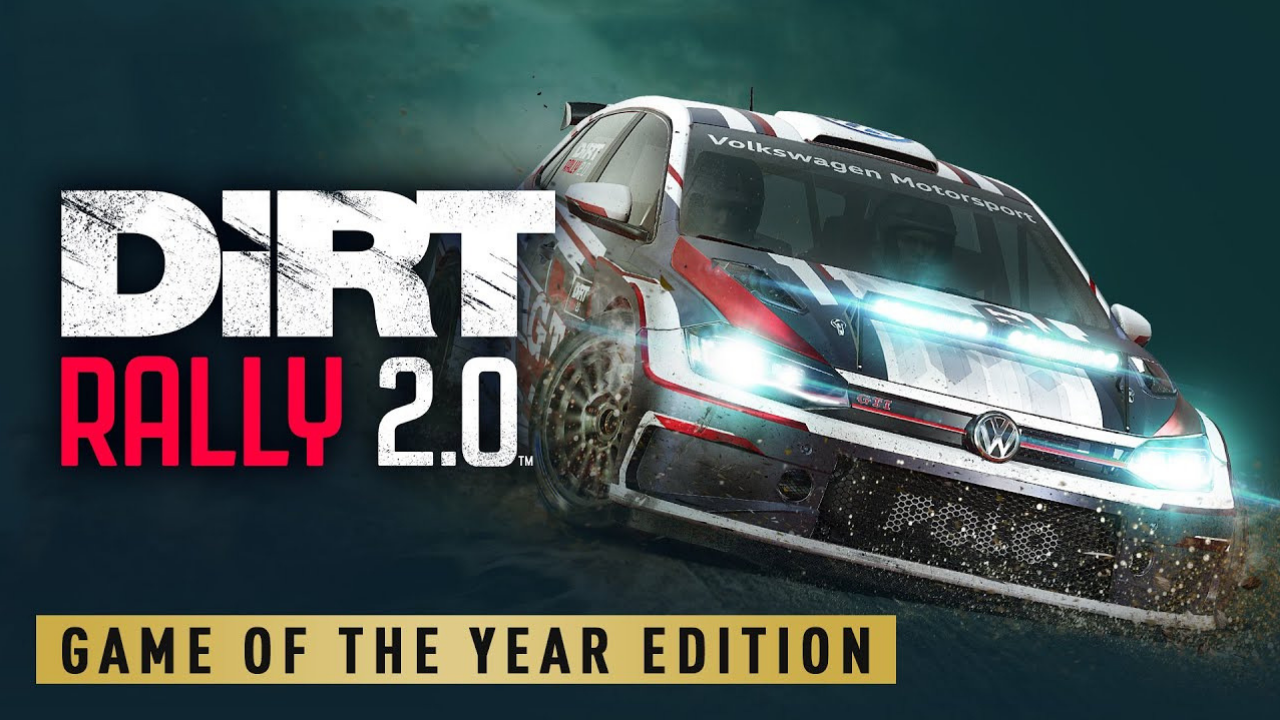 Available now on PC, Xbox One and PS4.

Codemasters have brought to us the game of the year version of it’s highly successful and brutal rally racer Dirt 2.0. This version includes every bit of content ever brought to the game. The game without all the extras is up there with some of the best racers around so with all the extra’s it’s surely worth every penny!

So we finally have the GOTY edition of one of the best rally sims available to date maybe even go as far as saying the best to date. Sadly we never got round to reviewing Dirt 2.0 when it was released so when the chance came up to get the GOTY edition we jumped at it!

As if the original game wasn’t enough the GOTY adds so much more content to what was already a pretty impressive package. The content includes all four seasons of content with over 80 vehicles and twenty-six locations.

The GOTY also includes the Colin McRae Flat Out pack!

The Flat Out pack allows racers to experience and re-live his amazing career with forty challenging scenarios from his illustrious career!

Dirt 2.0 is realistic racing at it’s best and will punish even the slightest mistake!

The original Dirt was renowned for how realistic it was and the way it would punish any little mistake made and Dirt 2.0 is no different! There are setting to adjust the handling and changing things like stability control and traction control can help to assist drivers trying to make it round the course without coming off.

Racers will need to be one step ahead all the time as even one wheel off the track can be enough to throw you totally off and damage the car beyond repair so you can even carry on.

The controls here are exactly how you would expect a non forgiving rally sim to be, hours of practice will be needed just to start even making it around the track slowly let alone setting a pace that would result in a win! When you do get it right however it is a real feeling of accomplishment!

Using a steering wheel there is plenty of settings to change and adjust to get the car to handle how you would like, players will need to adjust things as I found the default settings just didn’t react fast enough.

Even though the difficulty can be toned down there is no rewind function in sight..

The safety net that most games give you in a rewind button is not here and for many, this will be a really strange decision considering most people will make a mistake at least a couple of times but I think Codemasters deserves credit for not adding this as it gives you that constant worry that everything could go wrong around the next bend, this making you concentrate fully or be punished!

Listening to the co-driver is absolutely essential too as they will be key in getting you prepared for what is coming up next on the course. Describing jumps, turns and speed will give you a huge advantage in knowing what to expect in front of you. You can even hear the fear in their voices when things start to get a bit hectic as your flying around all over the place trying to keep control.

Setting good pace is only one thing that will be needed to win though as one mistake will result in damage to the car and the repair times eat into your overall time and can completely ruin a championship you are in.

I found the rally-cross mode a little easier, this mode puts you on a circuit with opponents to beat, you will then participate in races to qualify into the semi-finals and finals.

Damage again will come into play here and you will have to choose carefully what you repair and replace as leaving something may cause damage that you won’t have time to repair in the next break leaving that part of the car not working correctly, for me this was the turbo as I thought having no brakes was a bad idea!

Rally-cross is a great place to start and get used to the handling.

The AI in these rally-cross stages are challenging and will constantly keep the pressure on you to ensure you don’t get an easy ride. The handling in this mode is a little more fun with more of a forgiving arcade feel than the actual rally stages.

Although you are constantly going around the same track multiple times this mode was actually my favourite and I never seemed to get bored of it, eventually mastering drifting into the large corners while trying to move through the pack without contact.

There is also something on rally-cross called a joker lap and it’s something you will need to do once a race, it’s basically a long way round on a corner somewhere and everyone must do it once a race on any lap to avoid a time penalty.

Spend money on upgrades as you go along

As you win races and championships you will earn credits, earning these credits will allow you to upgrade your favourite cars as well as buying them and adding to your garage.

Buying engine upgrades need research which is acquired by winning races, these unlock and then they available for you to purchase, other things can be brought to upgrade durability on the car parts which should help keep repair bills down if you don’t keep crashing!

The other thing that can be brought is engineers, they are expensive and every time you hire one you will have the option to hire another till you have a full team of six.

Visually the game is stunning and Codemasters have done a great job in improving over Dirt.

Visually the game is really impressive, stages look fantastic with loads of detail everywhere! The lighting is also great and the HDR effects here really do make a noticeable difference. The weather system is also really realistic and then there are the cars and the actual track effects, looking in the rearview will show you the puffs of smoke coming up as your bombing across the stage or circuit.

Plenty of damage to be seen!

The cars all feature a realistic damage model and the minute you come flying off the track into a tree or something (you will at some point!) you will see panels smashed in or off, tyres burst and critical damage to the car beyond repair is always just one mistake away!

Performance-wise the game is fantastic, I am running at 3440 x 1440 on medium to high settings and getting over 100fps which is impressive considering the resolution this is being played at!

Make sure you have good headphones or speakers as the sound is well worth having up loud!

One reason for the sound to be up nice and high would be so you can hear your co-driver barking instructions at you as you are trying to stay on track the other however is because of how great this game sounds! Everything can be heard, on gravel the little stones pinging up against the arches, the turbo blowing off at every gear change along with pops and bangs and your exhaust spits flames! The sound system here is so accurate and it was an absolute joy to listen too even if my whole household didn’t think so!!

The GOTY edition for anyone who hasn’t played Dirt 2.0 is worth every penny in my opinion, the sheer amount of content that comes with it really makes it a great purchase.

Dirt 2.0 Game Of The Year Edition is a worthwhile purchase to any racing fan out there especially rally fans! Rally fans will know what to expect in the difficulty department and I will tell you now the game won’t hold your hand at all, there are setting there to adjust that will help but so much as get a wheel off the track and you will get punished and there is no rewind button to save you! Visually the game is absolutely stunning and everything is optimised perfectly! Sounds are fantastic and really realistic and handling either on a controller for more casual gamers or a steering wheel setup is perfect. All in all with all the content this whole package comes highly recommended from us so if you haven’t played Dirt 2.0 now is a great time to start!

2 thoughts on “Dirt 2.0 Game Of The Year Edition PC Review”