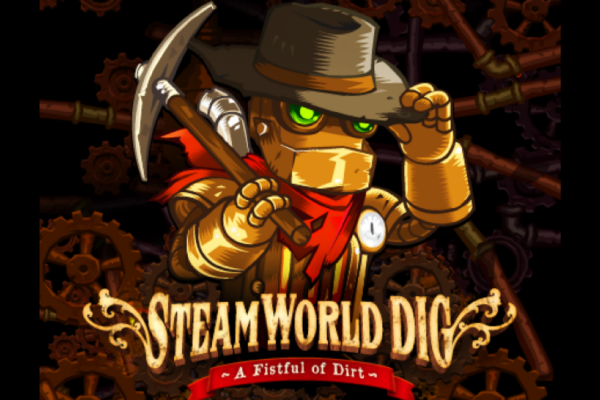 Tested on Nintendo Switch for this review.

With the major success of Steamworld Dig 2 on the Nintendo Switch it is little surprise that the original has made it’s way onto Nintendo’s handheld system, is it still any good and worth going back too? Keep reading to find out!

If you have played the game before this will be the exact same version with no added extra’s, playing as Rusty you will start the game in the town Tumbleton. Tumbletown is the location of Rusty’s newly acquired goldmine left to him by his uncle! After taking Rusty’s poor deceased uncles pickaxe you will soon be in the dark and dingy mine below.

Visually the game is crisp and clear very much like the latest edition with a really nice artstyle all having plenty of detail on offer. Playing as Rusty, exploring the mines will have you on a bit of a grind to to dig as deep down and as far as possible to explore all the mine has to offer! The main reason for the digging will be to acquire as many metals and minerals possible to then sell on the surface and purchase the essential upgrades to be able to dig even further!

While everything seems very easy at first there is careful planning needed as you dig deeper into the mine, breaking up one wrong block can leave Rusty stuck unable to to jump his way back up to the surface. If Rusty does get stuck the punishment for having to self destruct is losing half of all the hard earner items you have mined!

As Rusty progresses deeper into the mine the rock will get tougher, this requires upgrades to the pickaxe to then be able to break through into the deeper and more valuable parts of the mine meaning there will be no digging straight to the bottom. Some blocks that are broken will contain the metals and minerals but some will contain some of the games enemies, getting to these early enough can be an easy kill but if you get there late and they manage to break out you will have to time the shots right to take these creatures out before they take Rusty down!

HP and light are something that you will also need to keep an eye on while exploring deep into the mines, light running out can make things very tricky as digging in complete darkness makes things impossible. To regenerate light Rusty will need to either go all the way to the surface or pick it up off fallen enemies, health is similar in that enemies will sometimes drop it but otherwise it’s a trip to the top, unlike light though it well need to be brought for some of your hard earned money from the games shop above ground. The shop sells other items such as ladders and torches which really help while mining and as you level up and progress Rusty new and stronger items will unlock allowing you to dig even deeper!

Upgrades are something to work towards for Rusty, improved lanterns won’t burn out as fast leaving more time to dig further down before having to surface again to regenerate light. The story will keep Rusty on track to find improved upgrades in small caves and make the whole experience feel improved, adding things like being able to run and double jump make things much easier in the mines.

The whole experience feels very much the same as it always did but improved with the added portability of the Nintendo Switch, being able to grab a few minutes and mine a little further make the game a great addition to the Switch’s library! My only gripe with the game would be it’s longevity as when the main story is complete it feels like there is very little to do, most will get over 5 or 6 hours out of the story and then it’s just exploring new areas you may have missed if you want to but there is little to do once the main plot is completed which is a shame because it would be great to have more reason to carry on exploring.

SteamWorld Dig is very much the same game it’s always been and a very welcome addition to the Nintendo Switch’s ever growing library of games. With it’s beautiful visuals and performance it’s a joy to play through. Plenty of upgrades to Rusty keep things from getting stale and there is a real sense of achievement as you progress deeper and deeper into the mines below, the story is just long enough but once it’s complete players will be left with not much to do.