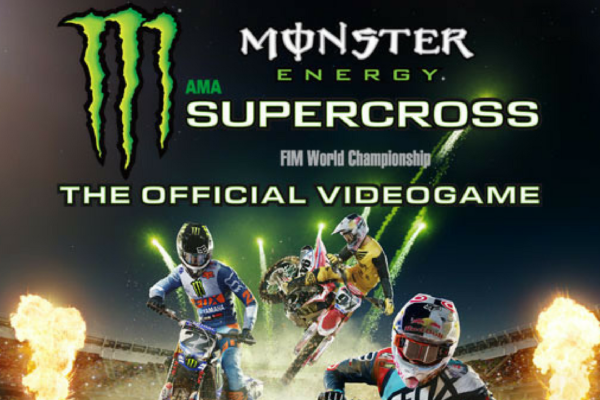 Finally we have what should be a great Supercross game! But is it? keep reading to find out!

Coming from the developer of the MXGP games and being based on the real life Motorcross series should hopefully be a good recipe for a great motorbike game that fans have been dying for! Monster Energy Supercross features plenty for fans to get stuck into including many different modes such as the single player career mode and multiplayer modes local and online! One of the best parts of the game in my opinion is the track builder, hours upon hours can be wasted perfecting a track to your liking and it’s real fun to play around with!

The main mode is the career mode and once the initial character creation is out of the way things can get started. There are two different championships to take part in and win from the start the East and West championships, once these have been won it will open up the US championship for you to compete in.

With your character created the option is there to customise both the person and the bike, upgrades to the bike will improve things such as speed, acceleration, handling and braking power. The upgrades are expensive but do make a difference to the bike.

Customisation to the character is cosmetical with plenty of options to have things however you want them. The game offers plenty of licenced brands in both bike and character customisation from brands like Fox Racing, Brembo, Pirelli and Michelin to name just a few.

Obviously items to improve the bike and the characters items will need to be brought from the customisation center, prices can be a little steep for the better items but it’s good to have something to work towards and the SX credits are earned through doing races and winning championships so you can upgrade along the way while progressing through the games modes.

Other than the Career mode and other single player modes there are the multiplayer modes, this allows you you test yourself up against eleven other riders online, one great feature is collisions can be turned off so you can concentrate on your own race without someone else ruining the whole race for you by smashing into you knocking you off the bike.

Now onto the most important part and that’s the actual racing, the controls take a little getting used to but once you get the hang of it there is a great racing game here which is really fun! Getting the speed right to make the jumps is crucial and moving the bikers body weight with the right analogue stick will help with the landings. The racing can be a little frustrating to start with and objects around the edges of the track will really slow you down but it’s great fun when you get the hang of the physics which are really good in my opinion.

Other racers on the track can completely kill the race at times as they can be a little overaggressive, it’s very easy to come off the bike by landing slightly wrong or even on another rider, on a few occasions I have actually managed to grab a ride by actually being stuck on top of another rider! The game does feature a rewind system by clicking the LB button and this will allow you to rewind to a position where you can change the way you did something in the race and make the landing properly.

Visually at times I was left really impressed, the puddles of mud  and track surface carry a good amount of detail as well as some of the real life tracks complete with fans in the crowd and lighting effects from the overhead spotlights. The riders and bikes had a fair bit of detail as well, the riders jerseys ripple in the wind as they are flying over jumps looked really impressive but one thing I wasn’t that impressed with was the riders faces as well as at start of a race everything had a really muddy texture and looked Playstation 2 like but for the most part the visuals are really good and do the job well!

Now back to what I said at the start of the review and aside from the great career mode we have the track creator and this was personally one of my favourite features of all! There is so many option on offer and it’s really well laid out it’s just great fun!

After building your track the option is always there to test it out and see if there is anything you want to change or add until you perfect it, once finished you can save it and use it or just start a whole new one, It’s easy to spend hours getting a track ready for a friend to then try and master it!

Monster Energy Supercross isn’t however a perfect game and it has a couple of setbacks, the first one is the loading times! This game loads so much and it takes ages to do it sometimes up to a minute, this is especially annoying when using the track creator as every time you want to test your new masterpiece you will be staring at a loading screen more than you would like! I did find playing on the Xbox One X was slightly faster but loading is still something that you will be doing often. The other problem I found is it’s performance at times, during race starts and times with a fair bit of action on screen there is noticeable slowdown in performance. These two issues maybe patched in the future and far from break the game but it’s something some players might not be able to look past!

Monster Energy Supercross is a really fun game once you master the controls and the amount of modes and options on offer will keep players entertained for a long time! The track builder is great fun and has plenty of options to customise to your liking and the career mode was a good challenge to play through. Impressive visual and licenced brands make this supercross game a worthwhile purchase to any fans of the sport! If your not a fan of the sport it may be a little hard to justify the games hefty price tag.