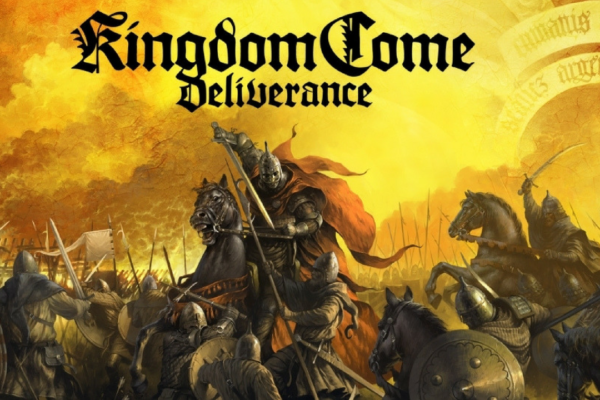 Kingdom Come Deliverance looks to be a different experience to what we are used too, no dragons, magic or far fetched plots just good old fashioned sword fighting but is it enough to keep things interesting?

The story takes place in 1403 as war is upon Bohemia, taking the role of Henry (The blacksmiths son) your town is burned to the ground by the Holy Roman Emperor Sigismund. Skalitz the town of which your parents and friends reside is a major source of silver and the reason Sigismund wants to loot the town also killing everyone in it. Henry manages to make it out alive and flees the village after watching his mother and father slaughtered to death, left with nothing but the sword him and his father forged together for the last time he now sets out on a mission to avenge his parents!

My first couple of hours of Kingdom Come Deliverance I have to admit had me worried, a few boring fetch quests, getting beaten with no chance of winning and then trying to escape on a horse from Henry’s fallen town which was incredibly frustrating as I was being chased the whole time while being shot with arrows and killed more times than I would like to admit! This wasn’t down to skill I just couldn’t do a thing to protect myself or outrun them! Then there is the way the game saves and the bad lock picking which I will come too shortly! However don’t discard this game at all because once the initial few quests are complete and you have worked your way around the controls and menus there is a really great game underneath!

Henry is a very likable and interesting character throughout, but most of the characters in KCD are very well written and all incredibly well voice acted.

Characters are well detailed and look pretty good visually with items of clothing that can change Henry’s appearance, the facial animation is a little off but easily looked past having everything voice acted so well. Xbox One X ran the game well with no major slowdowns, visuals at times look fantastic with great lighting and texture detail, the forest in perticular were really impressive and featured an amazing amount of detail, it’s clear a lot of attention to detail and work has been put into this game.

One of the main features for KCD is it’s realism! The systems on this game are extremely complex and something that the developers should be really proud of. Things like gathering food items that will degrade over time, once the food has gone bad eating it will cause Henry to contract food poisoning. Your actions towards others has realistic effects too, entering a fist fight and then pulling out a sword can cause your opponent to flee where as hurting others or stealing can land you jail time (If you can’t pay) in which you will have to wait for whole game days to pass by before you are released. NPCs will also treat you differently in regards to how you look (or Smell) washing regularly is a must and keeping clothes clean and tidy is also something you will need to keep on top of making KCD a real simulation that you will need to work hard on to keep on top of!

Keeping Henry healthy is also something you will need to manage, eating food, resting by sleeping as well as keeping an eye on how much you are carrying which if over the amount it will stop Henry from running or jumping. Managing Henry’s inventory will be one of the main tasks to keep him alive and moving around freely.

The path you take with Henry is totally up to you, there is plenty of choices to be made throughout the quests and it’s down to you which side you keep Henry on, do things the right way and make money slowly or grab a little extra by thieving off others the choice is yours, bare in mind how much everything affects everything in KCD before you make any decision. One early quest I was sent on was to retrieve an item from a mans house, what I found was there was multiple ways to achieve this. One way was to take Henry straight there to confront the man about the item, he took offence and tried to kill me so I then decided the better approach was to go back at night and sneak in the house to break into the chest containing the item or pickpocket the owner, this also didn’t go well as I broke the lock pick on the chest and his guard dogs awoke him, after fighting him until he gave up and then finally knocked him unconscious I was able to search his body for the key and grab the item. A few days later I was being chased by guards demanding I pay money or be thrown in prison, not having the amount of Groschen (In-game Currency) I was sadly thrown in jail and had to wait five whole game days which took forever to actually be released which really felt like an actual punishment!! This is the sort of level that the systems in this game have and what make the whole game world so impressive and intriguing!

Combat is slow, heavy and powerful all needing incredible timing!

The combat system will take some getting used too and at first Henry is pretty weak to be honest! There is hardly any point taking anyone on as you will most likely end up losing or dead! The sword fights feel slow and heavy as you would expect throwing around a sizable weapon trying to strike your opponent but it’s all about timing and that is where skill comes into it! You can swing your weapon in five different directions as well as blocking, parrying and feinting, using all these abilities will be crucial to bringing down your opponent and it’s far harder than you would expect to get right! A one on on fight is bad enough but if you manage to get yourself in a situation where your taking on more than 2 enemies fleeing might be the best option until you progress pretty far into the game where Henry has the ability to take them down much faster!

Henry does have the ability to skip combat altogether sometimes by improving his speech skill, this is done by convincing people in the conversations you have throughout the game. Henry’s skills upgrade overtime by doing the things that he’s trying to get better at such as running alot will increase stamina, archery gets stronger the more it’s practiced and horse riding improves the more your in the saddle ect.. This is a nice change from the points gathering to then spend on certain abilities and stats.

Now with all these complex systems and a big open world bugs have to be expected and in KCD sadly they are aplenty! Here’s an example of a few, I constantly heard lines repeated during cut scenes sometime up to three times in a row, characters and items will sometimes be seen floating around as well as hats and other items popping in while moving closer. While none of the above are really anything to worry about and don’t ruin the game play in anyway I did come across a few they were extremely frustrating, Henry seems to constantly get stuck on higher objects and can’t seem climb up even though it’s clearly within reach this even happened on some steps at one point which was majorly frustrating and then there was the sword fighting training that just seemed to completely break down! Henry will be instructed to do certain swings with the sword and after performing the task the instruction just stayed there and this went on for the next three lessons which had me aimlessly swinging the sword around waiting for it to finally end, also very frustrating! Even with these bugs though KCD still pulls through and no doubt in time the developers will iron out all these little glitches making everything feel that little bit more polished!

A couple of other things that really left me frustrated though that aren’t really bugs are the lock picking and saving your game. Lock picking on KCD is probably the most frustrating way I have ever seen on a game! While lock picking you control the lock barrel with the left analogue stick and the lock pick with the right analogue stick. The lock pick will need to be moved around until you find the sweet spot in the lock and it shows a bright yellow dot, you then need to turn the lock with the left stick and keep the lock pick in the same place on the lock as the whole thing rotates, this wouldn’t be so bad if they both moved smoothly but it just seems impossible to keep them both where you want them and unless I am just purely rubbish it does feel a little broken! Now onto the saving and it is a strange one, you can only save by finding a bed to sleep in or using the save menu and using a Savior Schnapps which is an alcoholic that can be purchased or crafted allowing you to then save whenever you want. There is a rumour going around that the devs are already working on a fix for better lock picking and also a save on quit option that will suit all players who don’t have endless playtime and are fed up with losing their progress because they can’t get to a save point in time!

Kingdom Come Deliverance is something new and different to normal, with it’s interesting characters, voice acting and story it’s a pleasure to play even with it’s problems and bugs which hopefully will be sorted soon with a patch. The visuals at times look absolutely stunning and the game world really is something you will want to explore and keep coming back too!