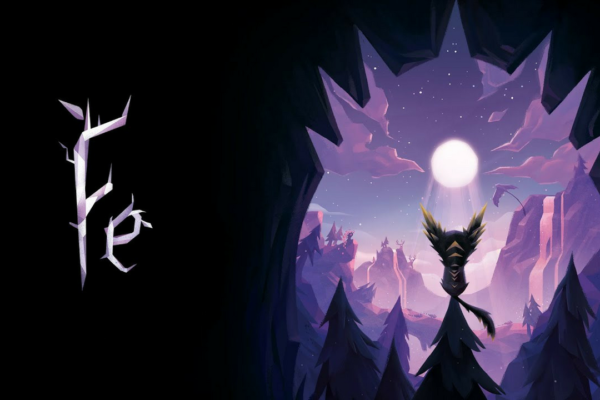 Available now on Nintendo Switch, PC, Xbox One and PS4

From developer Zoink games comes Fe, part of EA’s new EA originals titles which is focusing on indie titles. Is Fe going to be up there with some of the best platformer titles available? We will be taking an in depth look to find out!

From the moment the game started the vibrant and beautiful art style really stands out! The forest looks fantastic with so many colours and the lighting that will catch anyone’s eye it’s just a very pretty game that shows you don’t always need the most detailed visuals for the experience to look fantastic!

What I found strange at first with Fe is there is no real guidance. What it does well is with the way things look, players won’t need to be told these silent monster looking beasts aren’t friendly. The moment they spot Fe you will be well aware if you wasn’t sure of their intentions as they shine their spotlight on Fe and hunt you down! There is also no help on how to actually deal with them, as you explore it’s clear that stealth is your best and only real option! Within a few minutes bushes looking much like Fe will become a safe place to take cover.

The Silent One’s are a strange and secretive enemy, flashbacks can be activated by using a gem found that Fe will put over it’s face and then show the view from a Silent Ones point of view.

Fe’s singing is the main ability that this little creature has and it’s something the player will use alot while exploring this beautifully drawn game. Singing to other creatures will allow Fe to get help from them and progress through the forest. The singing is controlled by pressure on the right trigger and applying just the right amount will allow Fe to communicate with the creature and some plants to aid Fe’s quest, some creatures will be key to reaching higher points of the forest as will some plants that will allow Fe to reach areas with platforms. There are some creatures that won’t allow Fe to use their abilities straight away and will require Fe to learn their language first!

Fe can learn new skills as well as the language of other creatures, one of the first new abilities will be the ability to climb up trees. This new ability will allow Fe to shuffle all the way to the top of the tree and reach even higher places in the forest, also this can be a great spot to hide and watch down on the enemy Silent Ones and plan Fe’s route around them safely.

While most things in Fe I found very intuitive I did on occasion found myself left frustrated and confused! One quest I gathered I needed to do was help a giant bird looking creature that was nesting and protecting it’s eggs until the Silent One’s come along and took all four of them. Using my new ability having a bird guide Fe I had to track down the eggs and bring them back to the big bird. The first three I did were straight forward enough, sneaking around to grab them and bring them back it was the last one that left me a little lost and confused. In the cave I was guided to was a Giant creature who had taken down the Silent One with the egg and was holding the egg. While in his cave he would chase Fe I tried just about everything i could think to get the egg and explored the whole cave from top to bottom. It turns out that there was actually a small round pink gem type rock behind and above the creature that Fe needed to get and then the creature would drop the egg, then take the rock instead. This would have been easy enough if the rock wasn’t the same colour as all the surroundings and blended in so well! Fe’s lack of any real help is great to get the player really thinking to solve problems but sometimes it can really leave you totally lost.

The video below shows the rocks location.

Fe’s small bird that helps to direct can also open up a sort of weapon, the bird will sing to small flowers scattered around the forest that will then open up and reveal a small green stone, Fe can pick these up and throw them. The green stone will explode on impact and can release trapped creatures that are imprisoned by the Silent Ones.

The game is set at a good pace, the story unfolds and new abilities unlock for Fe allowing further exploration of a world that is more than worth exploring, some of the views once Fe is able to catch a ride on a birds back are absolutely breathtaking!

A quick mention about the sound and it has to be said Zoink games did a great job here, there is no dialogue but the music is perfect and has some of the most relaxing music I have heard in a game as well as sound effects that clearly show what each creature or enemy is about while all accurate enough to also show the danger around.

Fe is a beautifully drawn game with some of the most vibrant colours and lighting seen in a while, the forest is worth your time for this alone. Some players may find a lack of help a little frustrating but Fe is intuitive enough for most and provides a great puzzle experience with great backing music to enjoy while exploring the depths of the forest.